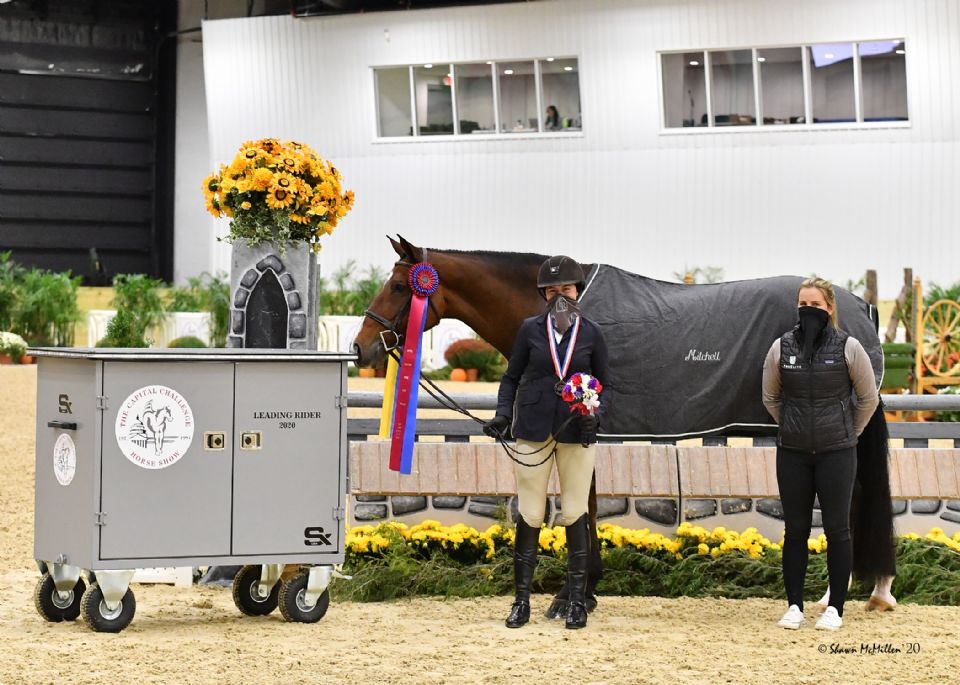 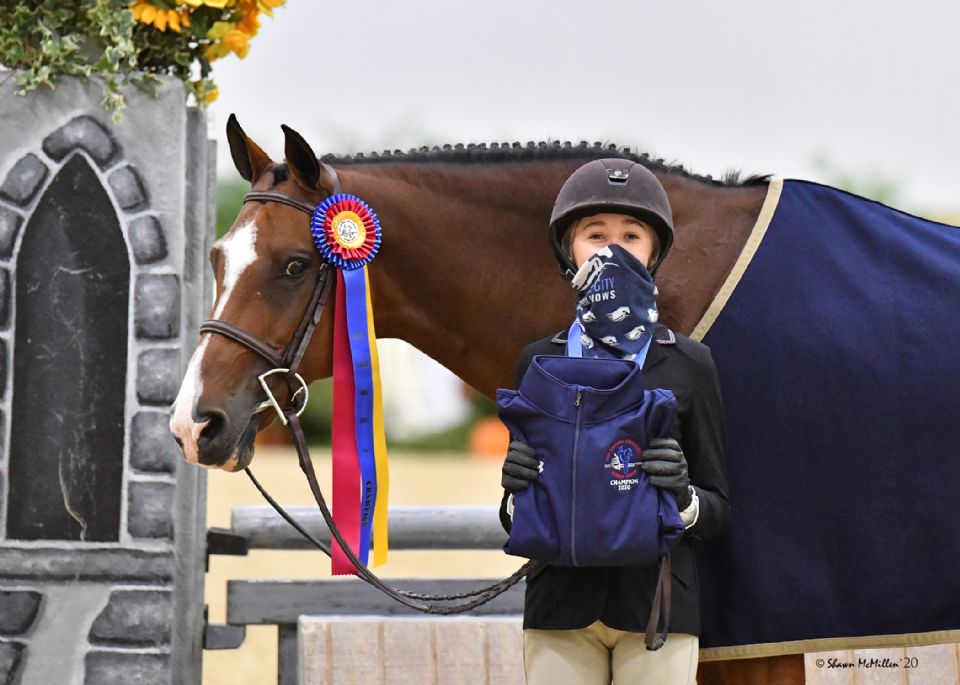 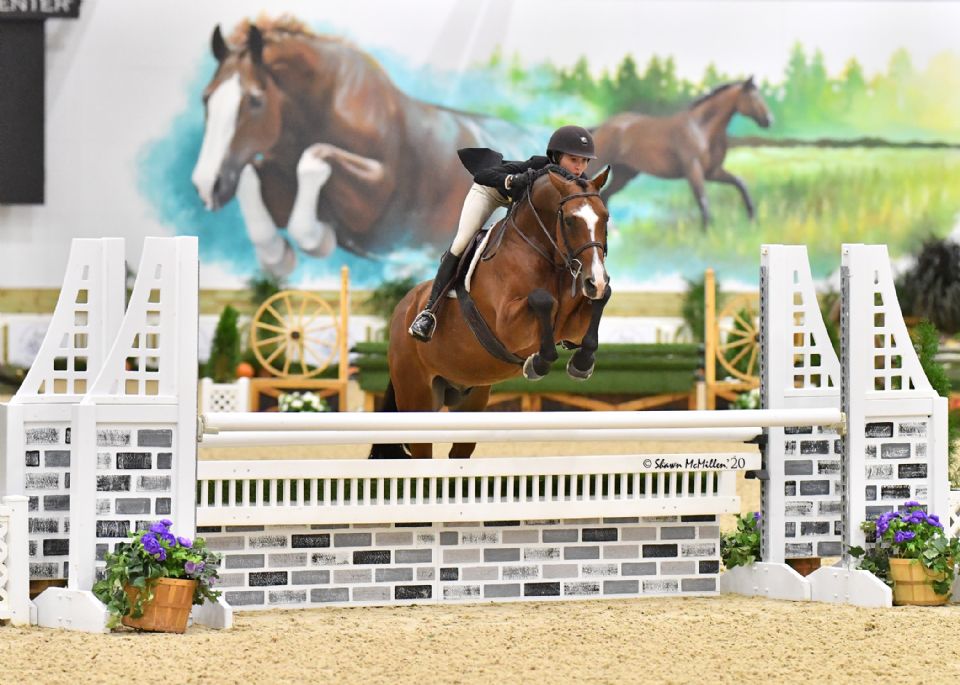 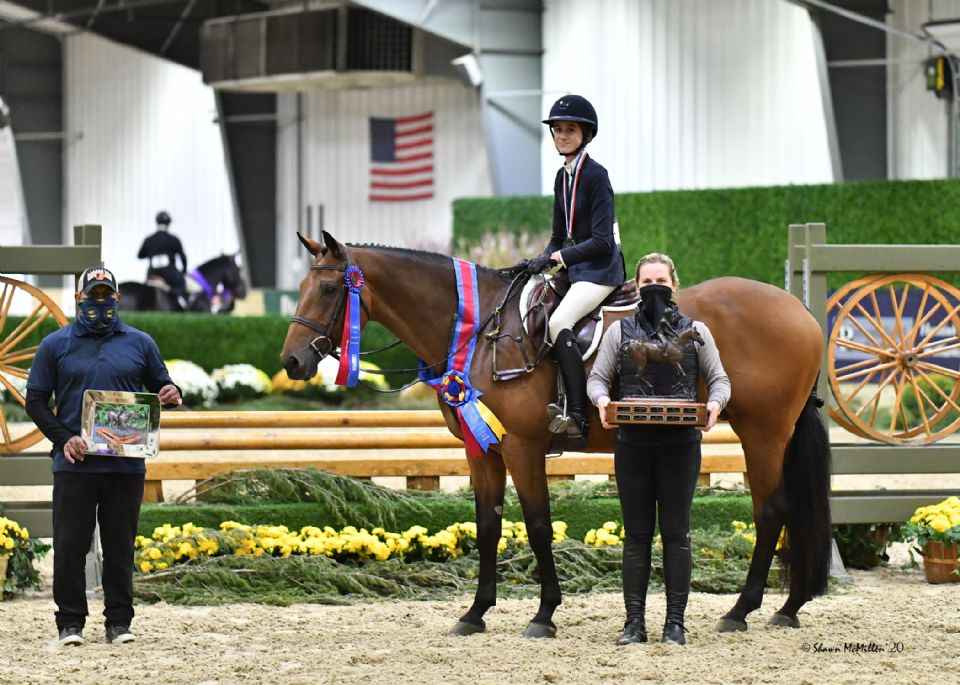 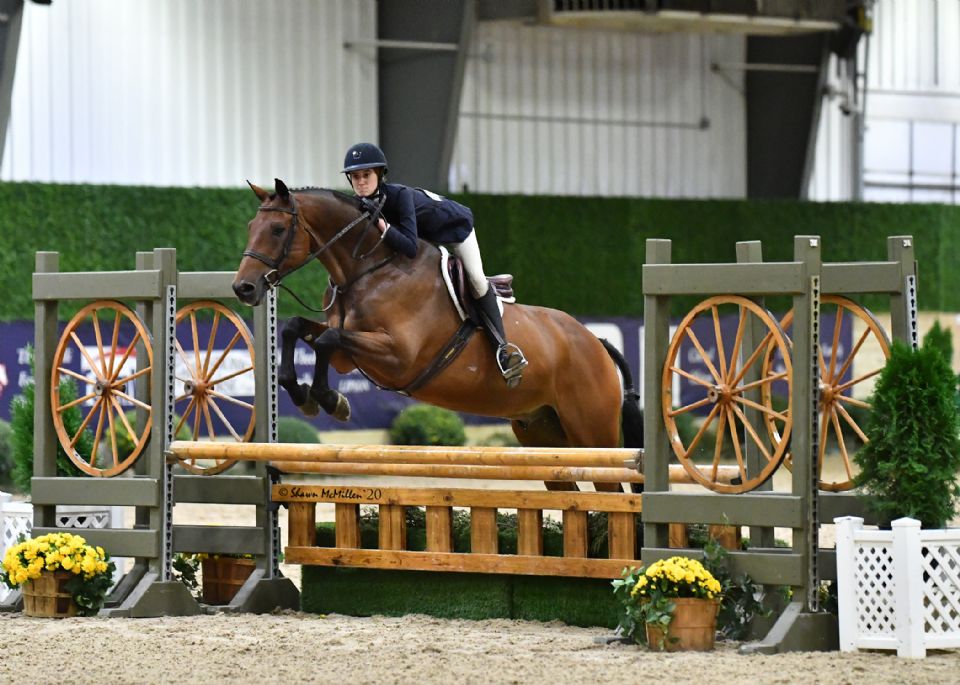 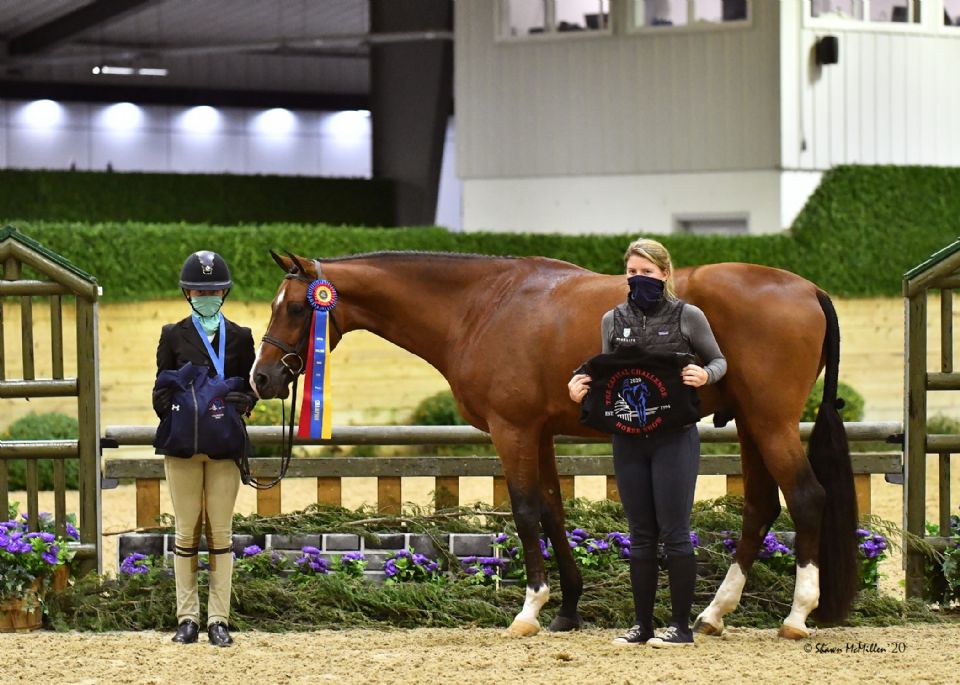 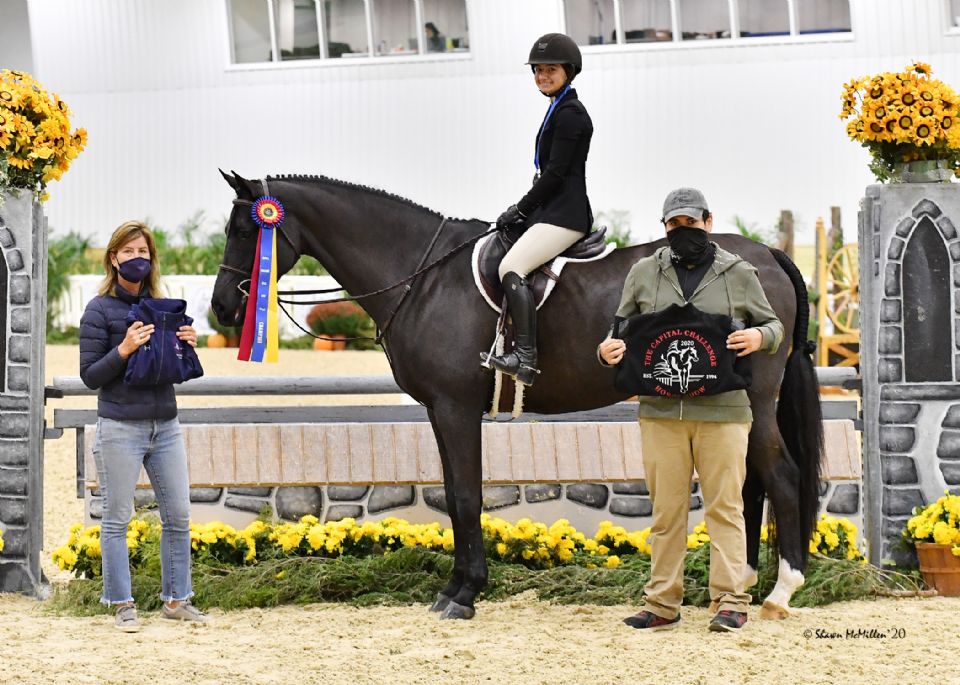 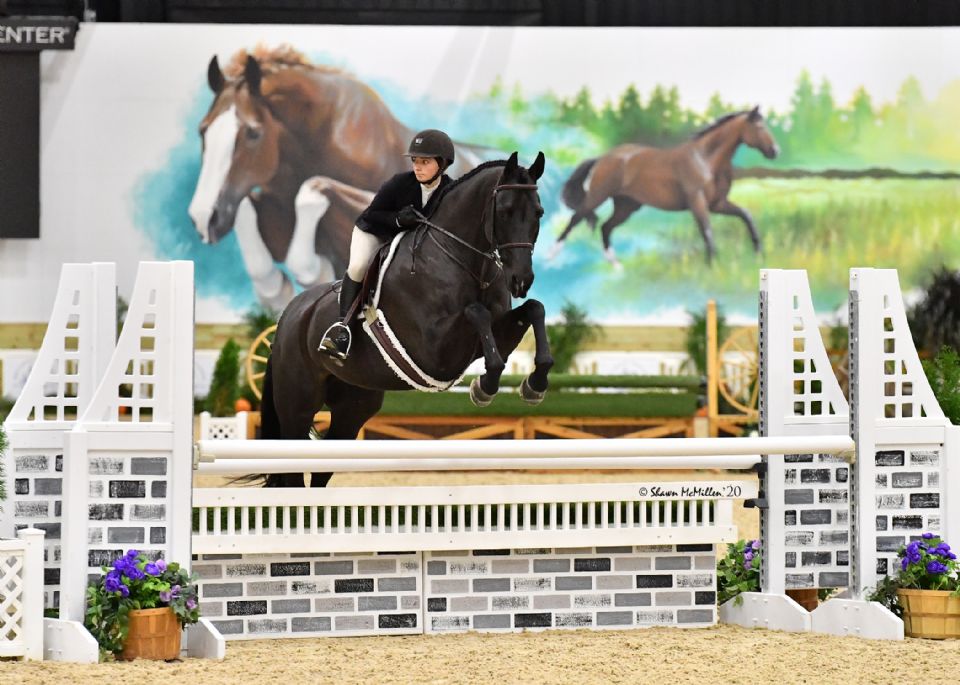 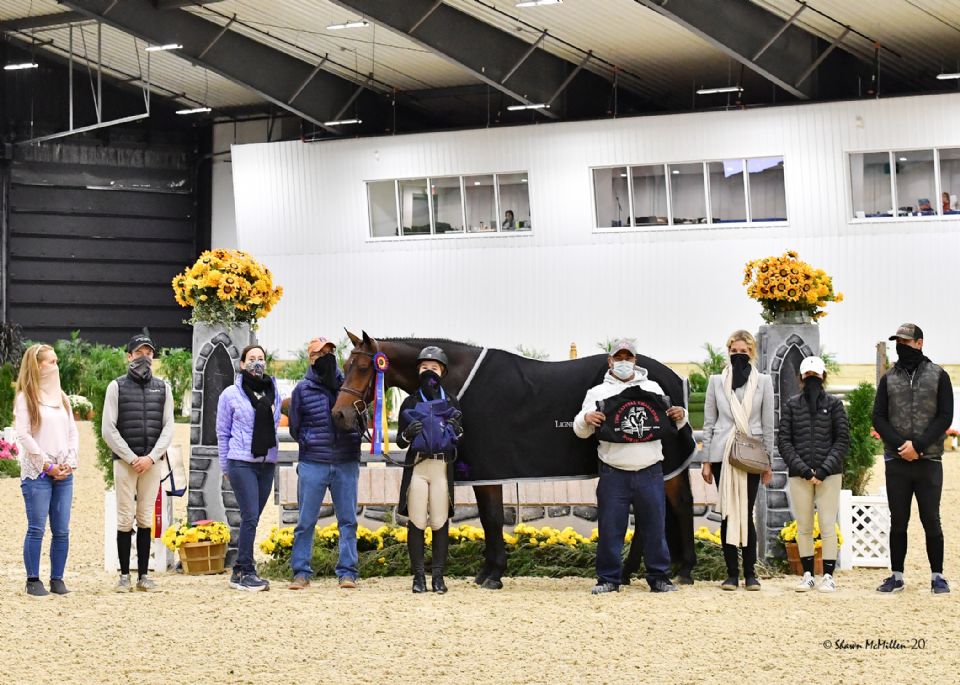 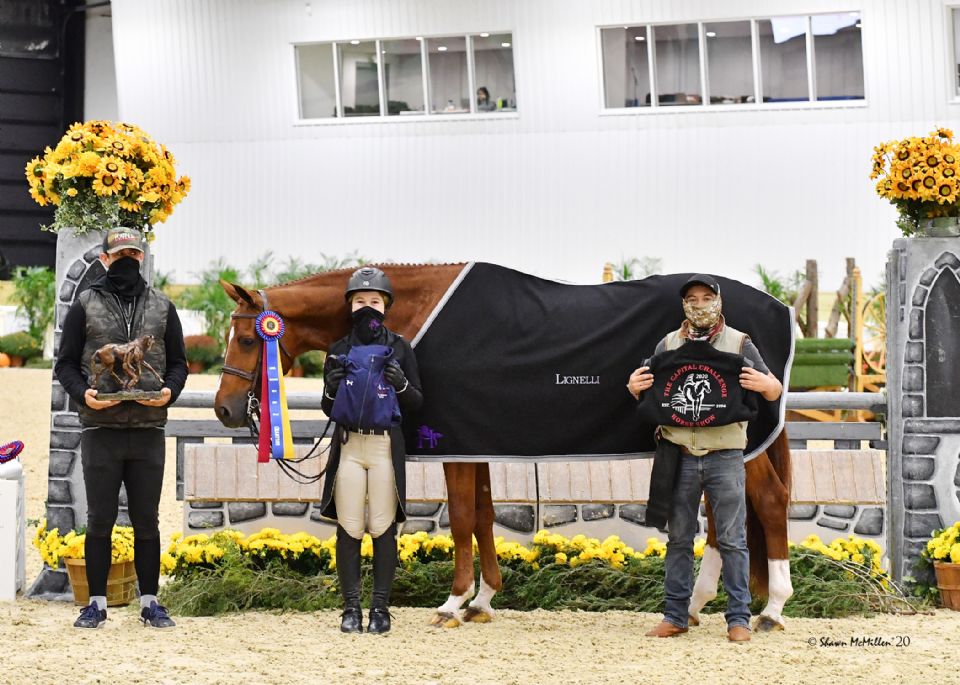 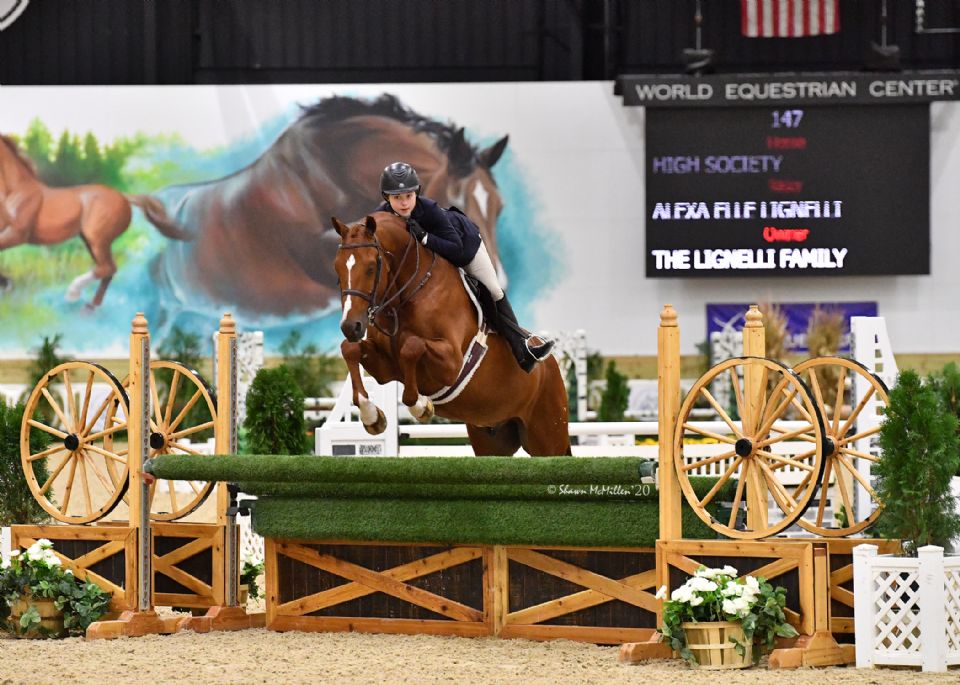 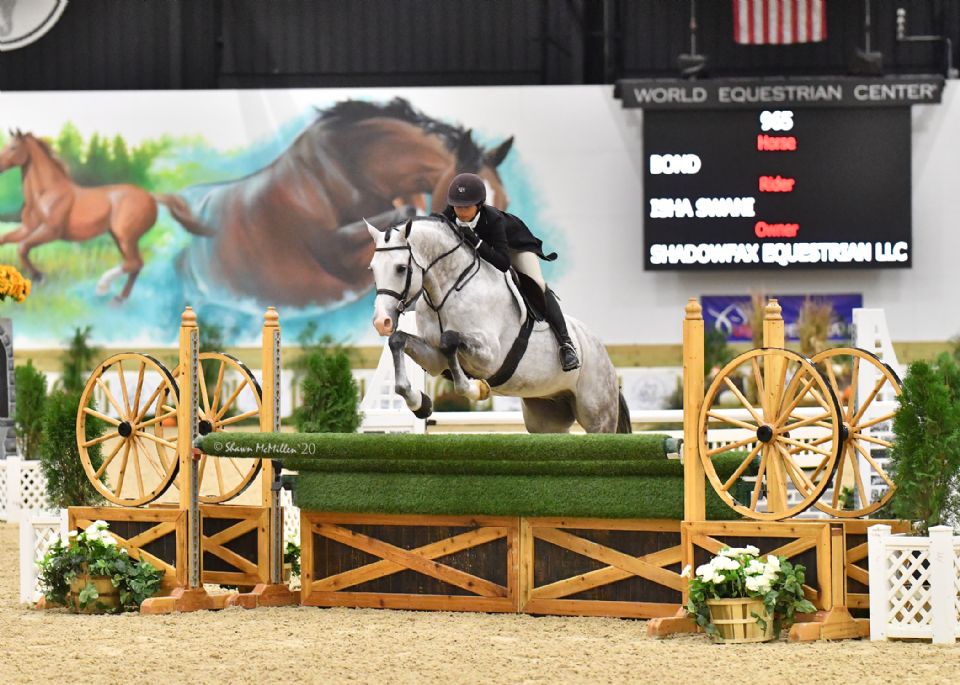 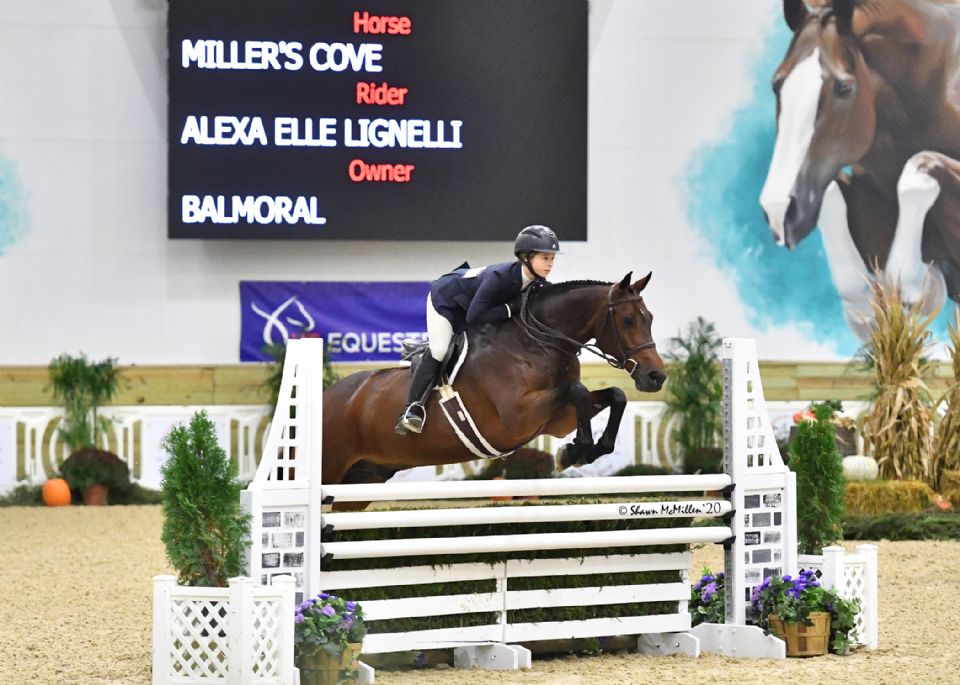 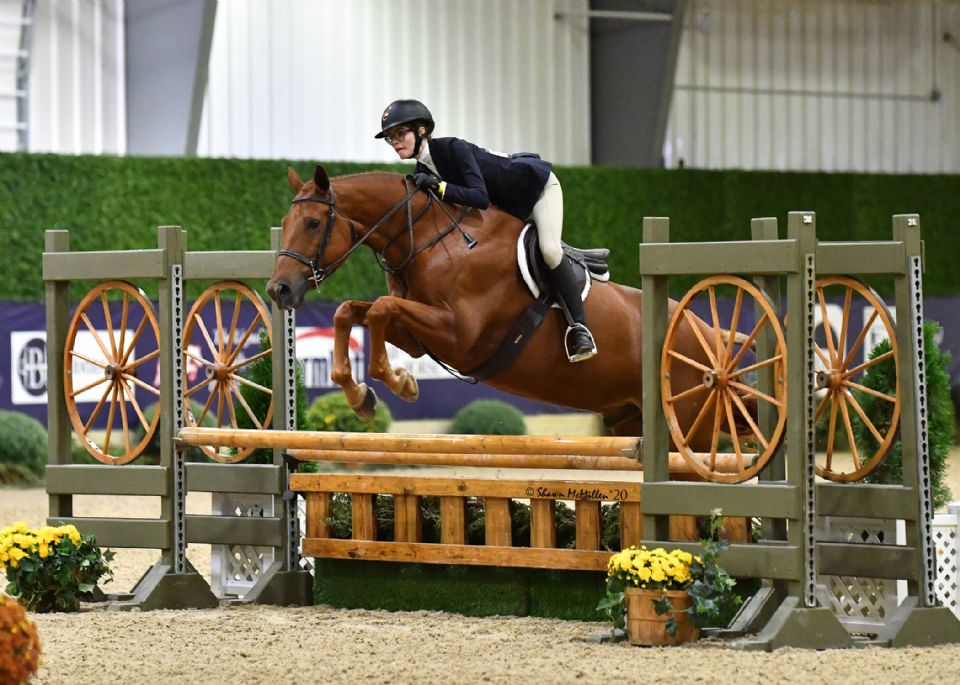 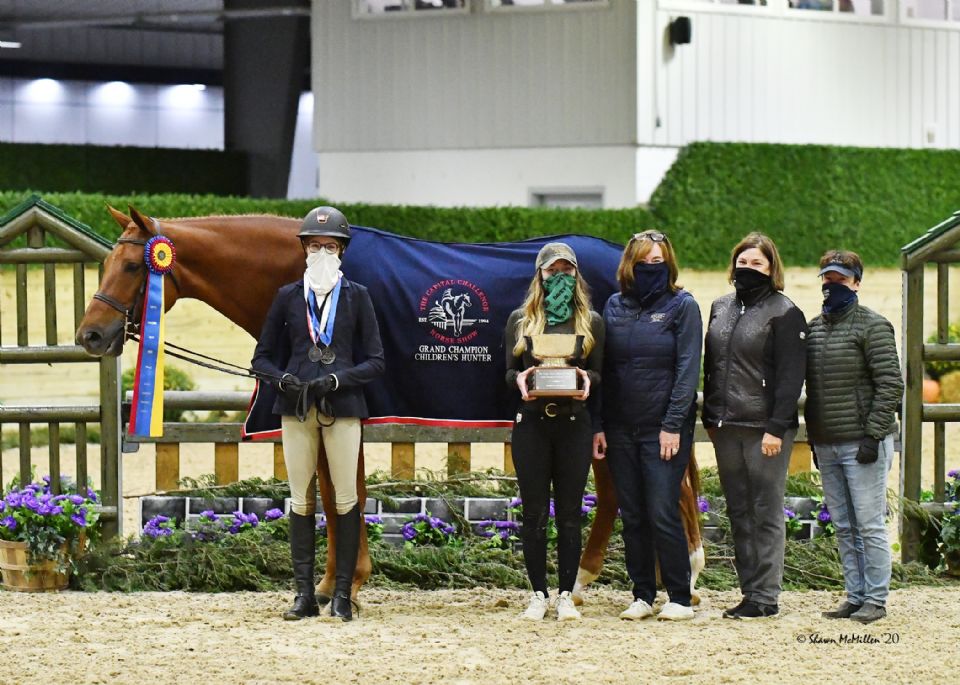 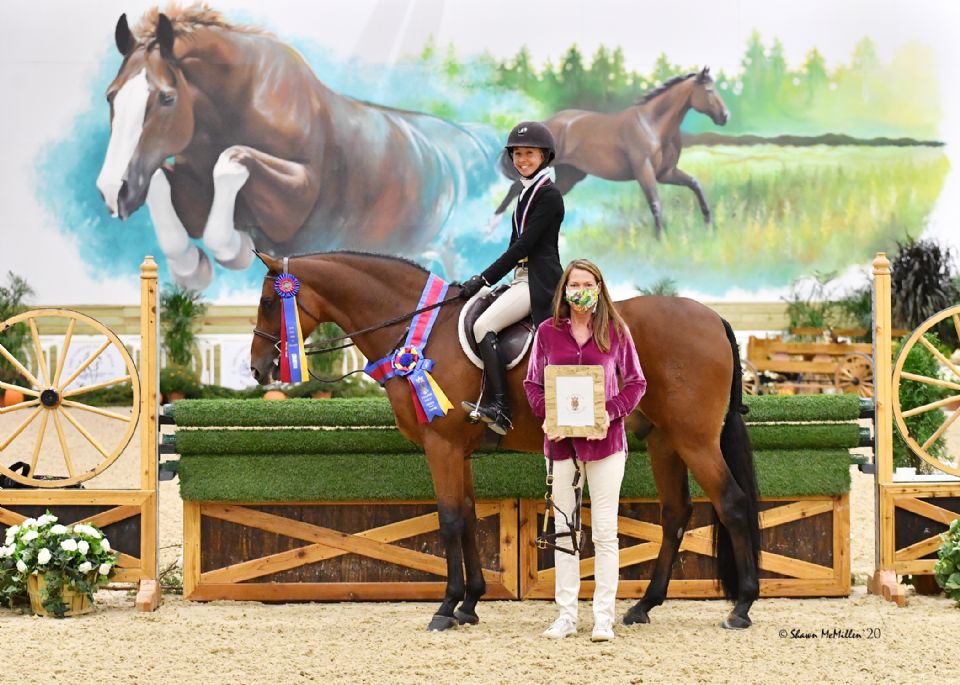 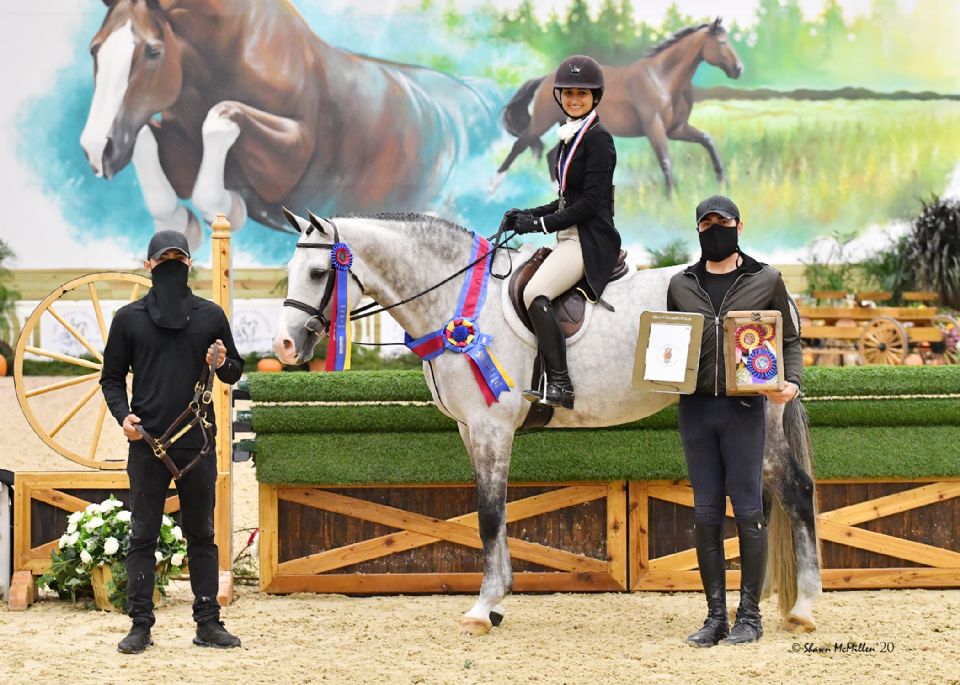 On their way to the overall championship win, Mitchell and her own Chevito first clinched the Large Junior Hunter 3’6”, 16-17 division championship, sponsored by Beacon Hill Show Stables. The duo picked up two wins and a third-place finish over fences, as well a second place under saddle to earn the most points of any Junior Hunter 3’6” competitor at this year’s show.

“I’m so excited! This horse has never let me down ever,” said Mitchell of Chevito, the 11-year-old Holsteiner gelding that she has had since early 2019. “He really performed. He gave me his all this week, and I’m so happy with how it went.

“You can tell when you go in the ring that he wants to win just as much as you do,” continued Mitchell. “To ride him is so nice. He’s so smooth. He has a beautiful jump, but it’s not too hard; it’s just right. Everything about him is just so nice.”

For the Overall Grand Junior Hunter Championship, sponsored by Shadow Ridge, Mitchell was presented with the Spontaneous Perpetual Trophy, donated by the Listrani Family.

Mitchell also received the Best Junior Rider Award, sponsored by Karen Healey, and the overall Leading Junior Hunter 3’6” Rider Award, for which she was presented with a beautiful STX Tackbox, generously donated by STX Vans.

“I looked at the tack trunk at the beginning of the show, and I was like, ‘That’d be so nice to win that; I wish I could win that,’” said Mitchell of her winning prize. “I never actually thought I would. I’m so excited! It’s so cool.”

Mitchell has trained with Val Renihan of Findlay’s Ridge LLC for the past two years, and this year also marks the young rider’s second year competing at Capital Challenge.

“I’m so grateful to Val for finding Chevito,” said Mitchell. “He’s a once-in-a-lifetime horse, and training with her has been amazing. I’ve really improved a lot. She works so hard to make us as prepared as we can be when we go to show. With him, for me a lot of what we work on is just relaxing right before the jump so that he can give the best jump possible and keeping a nice rhythm all the way through, the same rhythm.”

Finishing behind Mitchell and Chevito as the reserve champions in the Large Junior Hunter 3’6”, 16-17 division were Ellie Ferrigno of Newtown, CT, and Mercy Me, owned by Donald Stewart.

The Small Junior Hunter 3’6”, 15 & Under division championship, sponsored by New England Farm, was also awarded on Sunday, going home with Lignelli and Miller’s Cove, owned by Balmoral. The reserve championship went to Henry Healy of Cincinnati, OH, and Reston, owned by Susan Moriconi.

The Best EMO Junior 3’6” Trip of the Show, sponsored by the EMO Agency, went to Lignelli and High Society with a score of 90.5.

Sterling Malnik of Ocean Ridge, FL, and her own Coronation earned the Grand Junior Hunter 3’3” Championship before also topping the $2,500 WCHR Junior 3’3” Challenge, sponsored by Over the Hill Farm.

“It means a lot to me,” said Malnik of receiving the WCHR class win and the grand champion award, sponsored by Ocean Echo. “It feels like almost a dream come true. I felt very confident going in the ring with [Coronation]. He just really was amazing.”

Malnik was paired with Coronation in January of this year after purchasing the gelding the same day that she tried him.

“The moment that we saw him, we knew there was something special about him,” said Malnik of the 11-year-old Holsteiner gelding. “He’s such a smart horse, and he has a big, big heart out in the ring.”

On their way to the overall Grand Junior Hunter 3’3” Championship, Malnik and Coronation earned the Junior Hunter 3’3”, 14 & Under division championship, sponsored by Hesslink * Williams.  The pair finished with two division wins, topping the under saddle and the stake, as well as earning third and eighth place over fences.

“I really liked my handy because I thought [Coronation] was really slick,” said Malnik, who trains with Bill Schaub of Over the Hill Farm. “I try to back him up a little bit; he jumps better from a little bit more of a gappy distance. I gently took feel on my reins, so he settled back completely. Then he just popped his knees up.”

This year marks Malnik’s second year competing at Capital Challenge, and she credits Coronation with helping give her the confidence to excel at shows such as this one.

“When I go in with confidence, I’m very determined, and I try to make it happen,” concluded Malnik.

The Junior Hunter 3’3” EMO Trip of the Show, sponsored by the EMO Agency, went to Camille LeBlond’s Category, ridden by Blythe Goguen of Lexington, KY, on a score of 90. Goguen also earned the reserve championship in the Junior Hunter 3’3”, 14 & Under division, taking home a first over fences and third in the stake.

Wrapping up the Junior Hunter 3’3”, 15-17 division, sponsored by Katie Kappler LLC, it was Sydney Walls who earned the championship with Kingston Lane, owned by Roberts Stables, LLC. Isabella David of Holmdel, NJ, took reserve with her own Cornucopia.

“It’s really exciting,” Sutherland said of her win at her very first Capital Challenge. “I was going into this weekend just hoping to come back with a ribbon. I’ve only been riding for four years, so I never even imagined this would be possible.”

The pair picked up two blue ribbons in the over fences, as well as a second in the under saddle to finish as champions in the Children’s Hunters, 15-17.

“I think that overall our strength was that we had a really consistent pace,” Sutherland said. “We weren’t going too fast, and he’s a naturally big-strided horse, so we made it down the lines easily. He really tried his best and was jumping everything the best he could.”

Sutherland was also awarded the Best Children’s Hunter Rider Award, sponsored by Wild Sky Farm & The Nelson Family, and she was chosen as the Children’s Hunter recipient of the Stewart-Warner Cup, given in memory of Laurie Gilbert Stewart & Mary Warner Brown by Donald E. Stewart, Jr. & Louise Serio.

The Children’s Hunter 14 & Under Championship, sponsored by Mr. and Mrs. Gary Duffy and Little Brook Farms, Inc., went to Ava Berman of New Freedom, PA, and her own Skorekeeper, with reserve going to Elizabeth Simpson of Parker, CO, with her own Caso 2.

The win in the $1,500 WCHR Children’s Challenge went to Rose Campbell of Cochranville, PA, riding her own Tallyman.