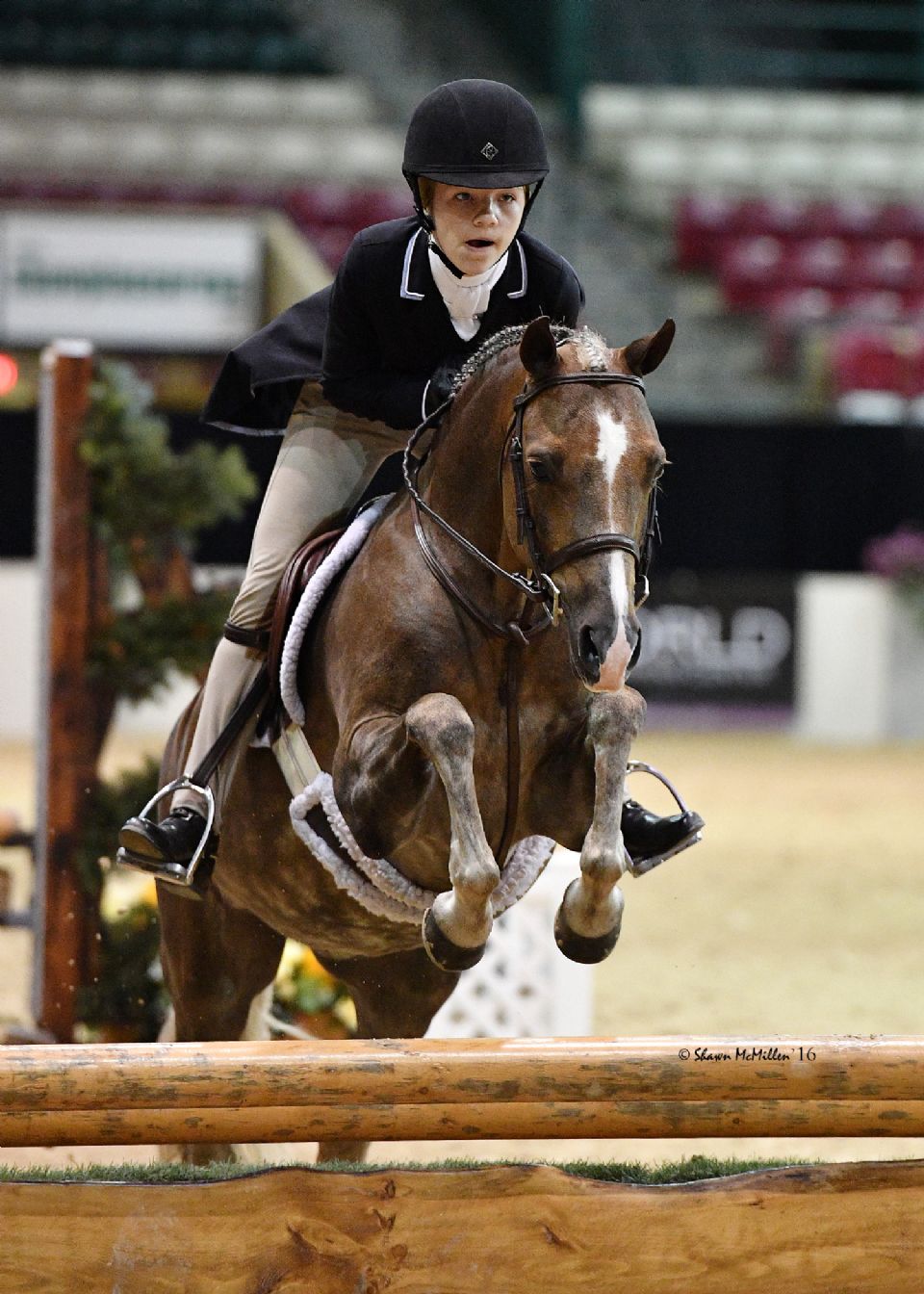 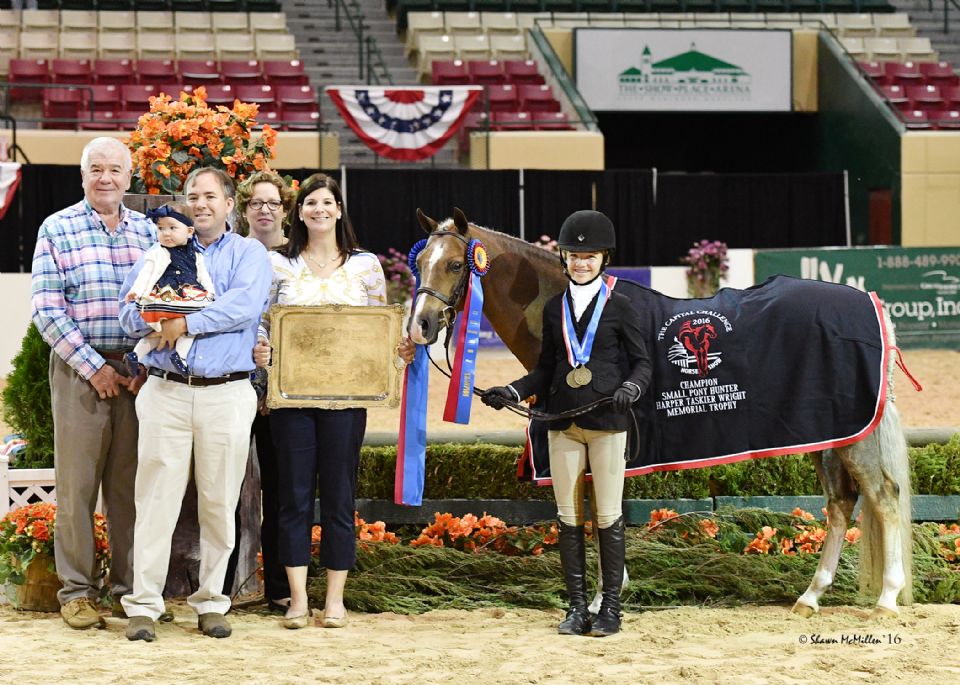 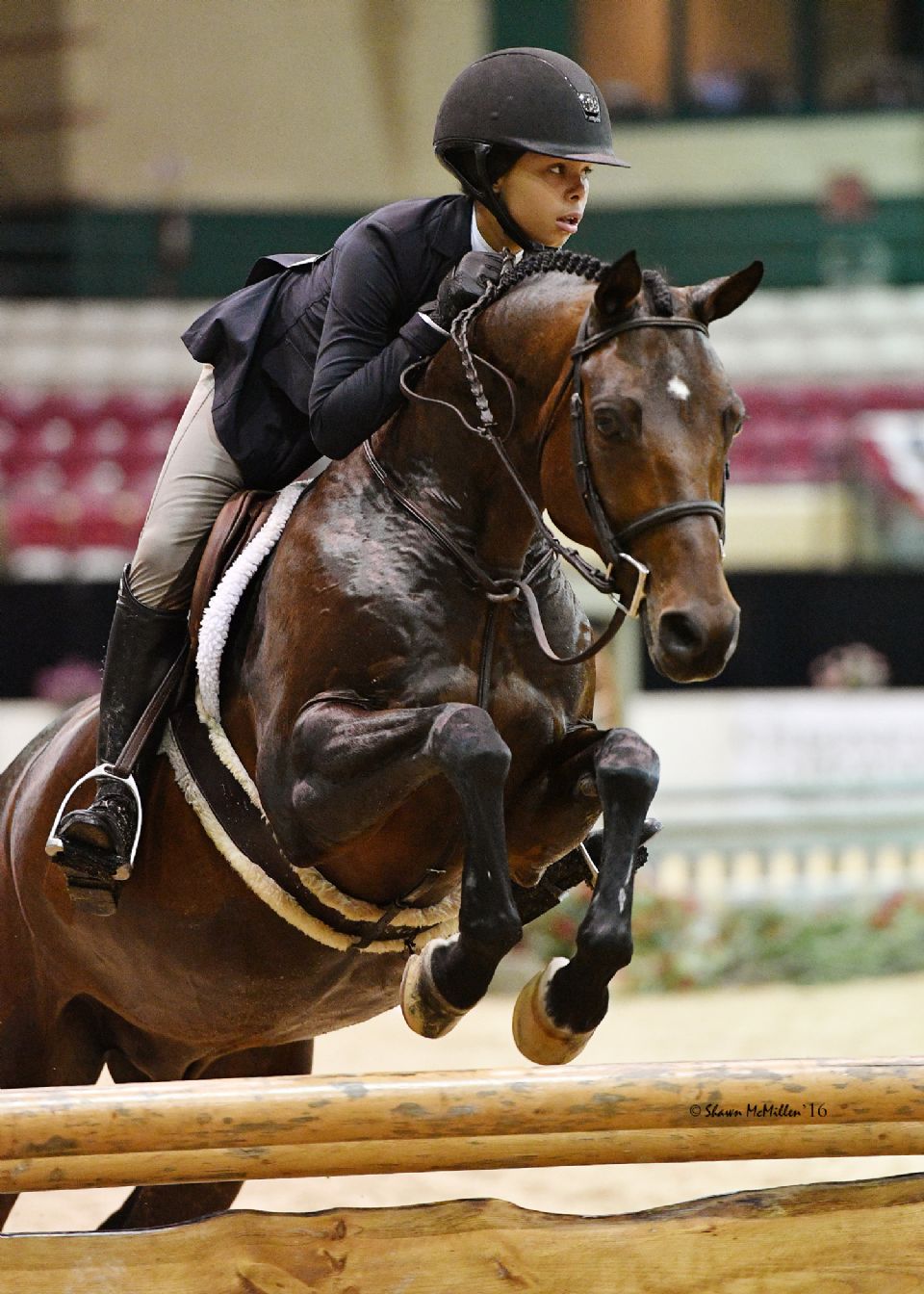 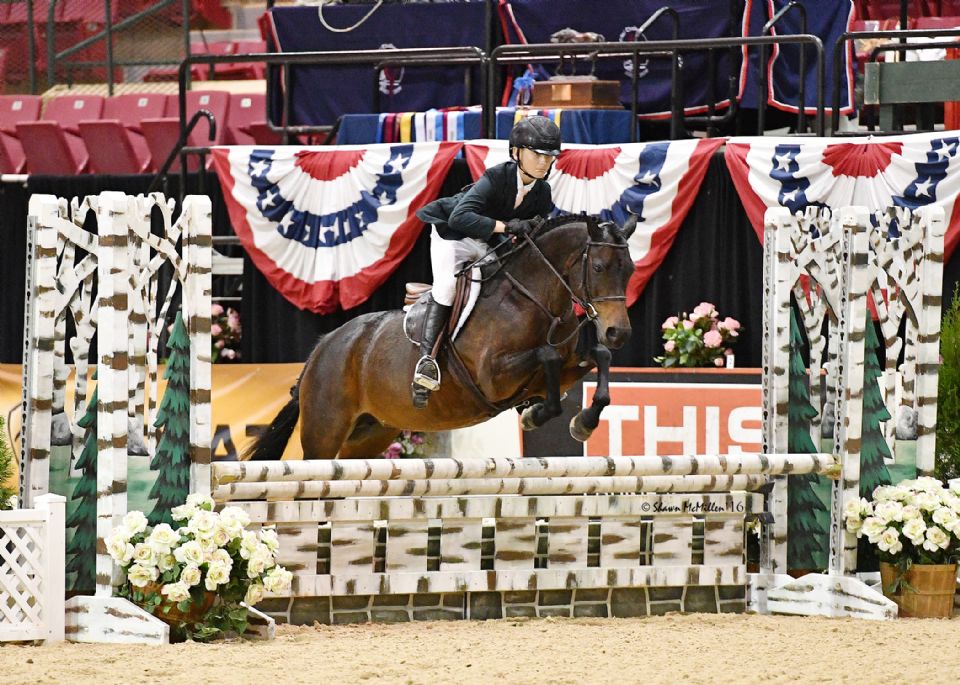 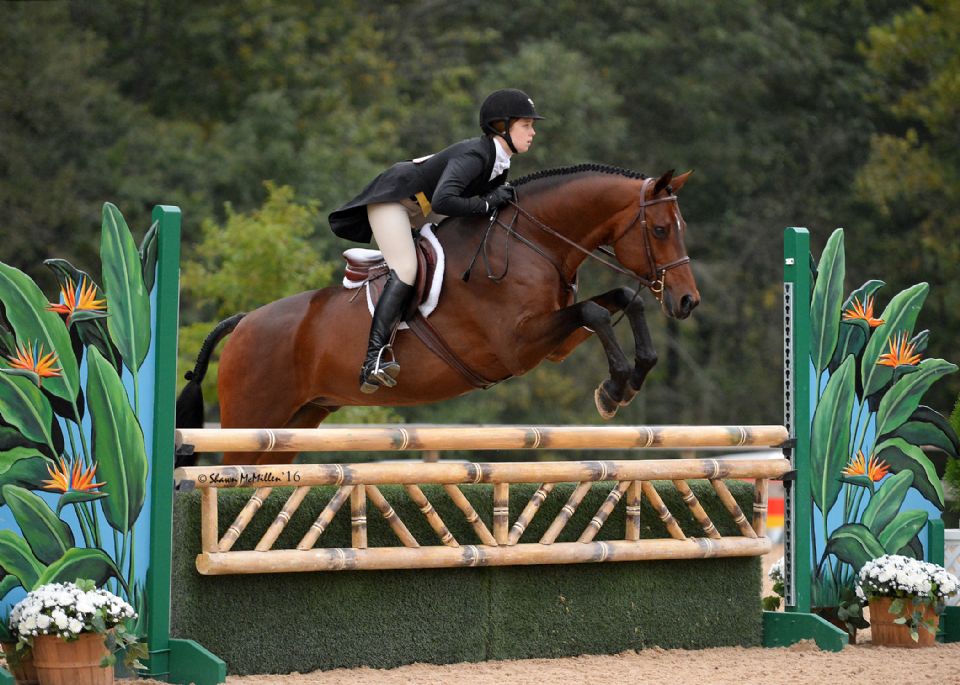 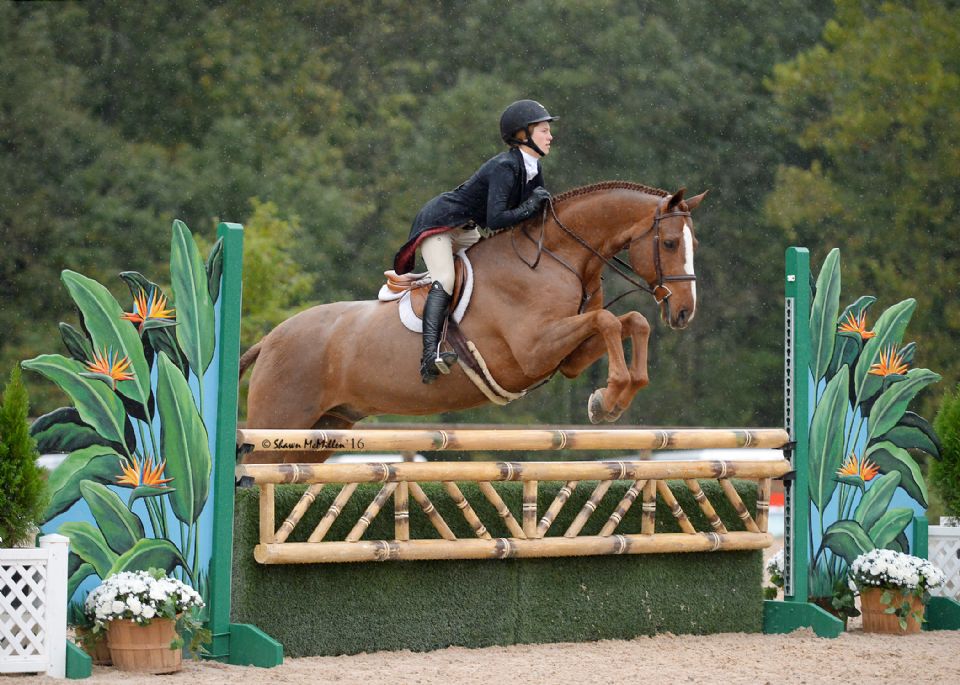 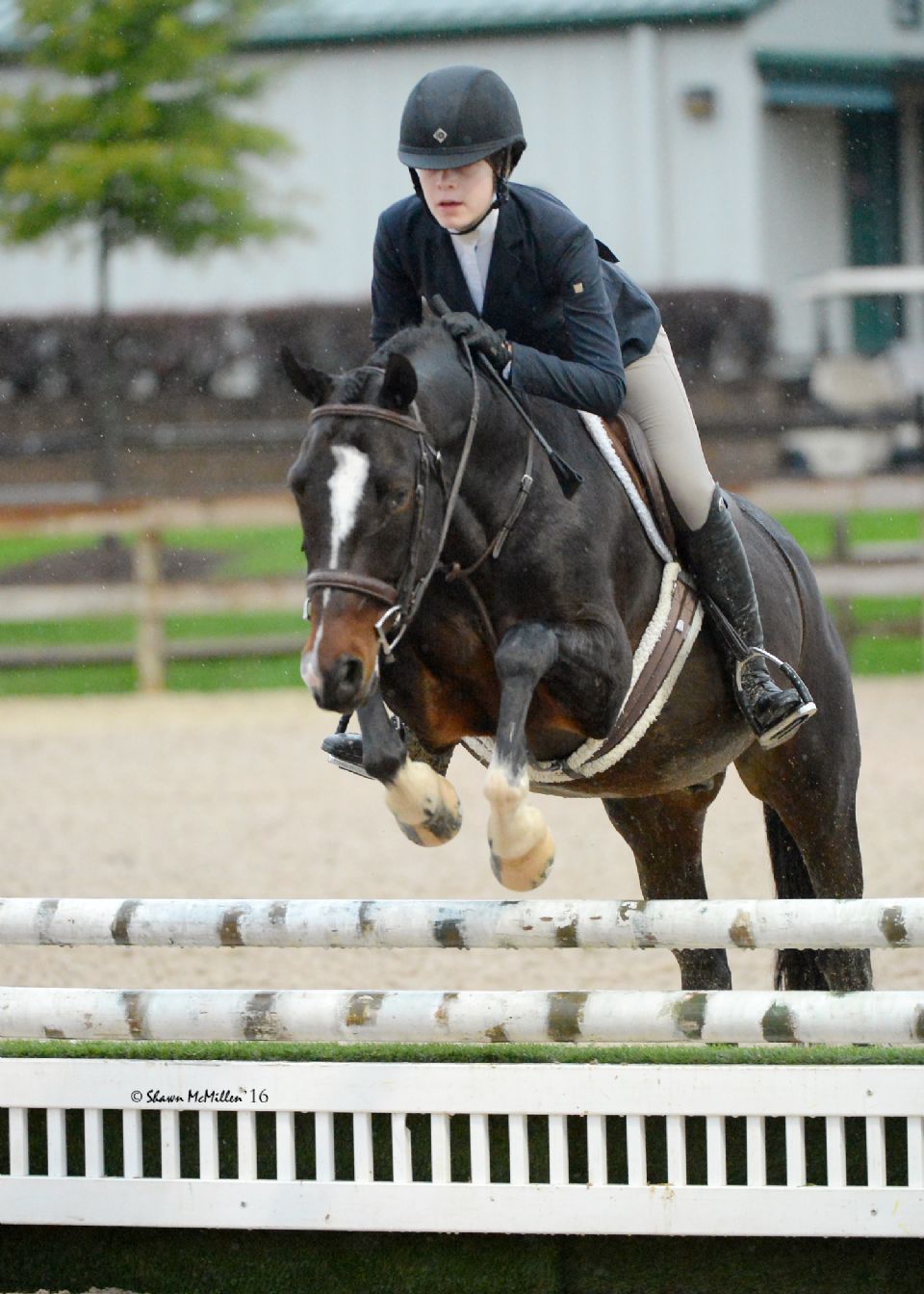 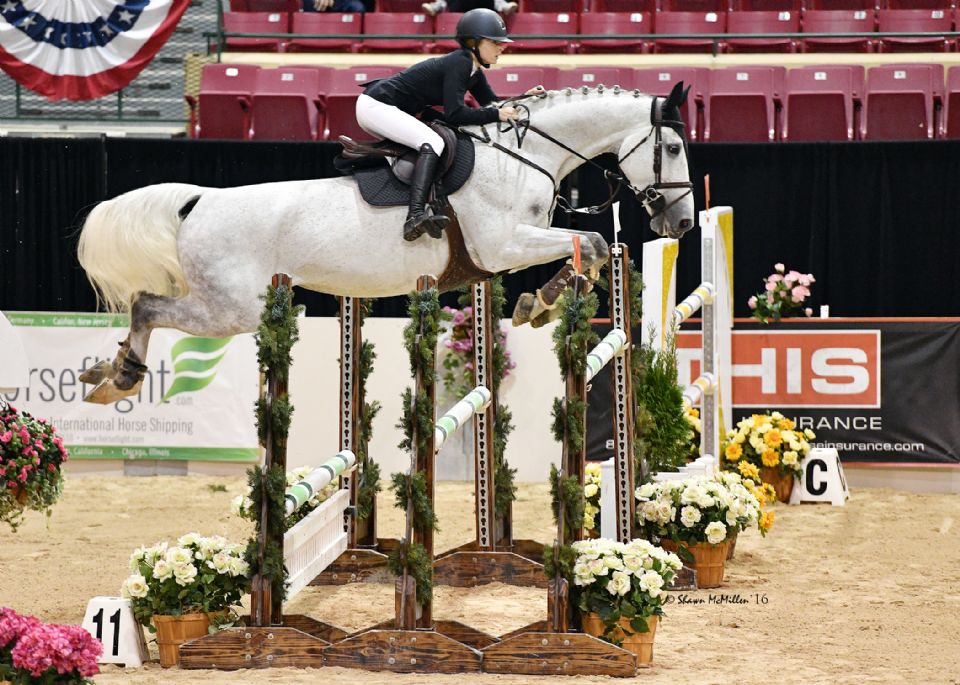 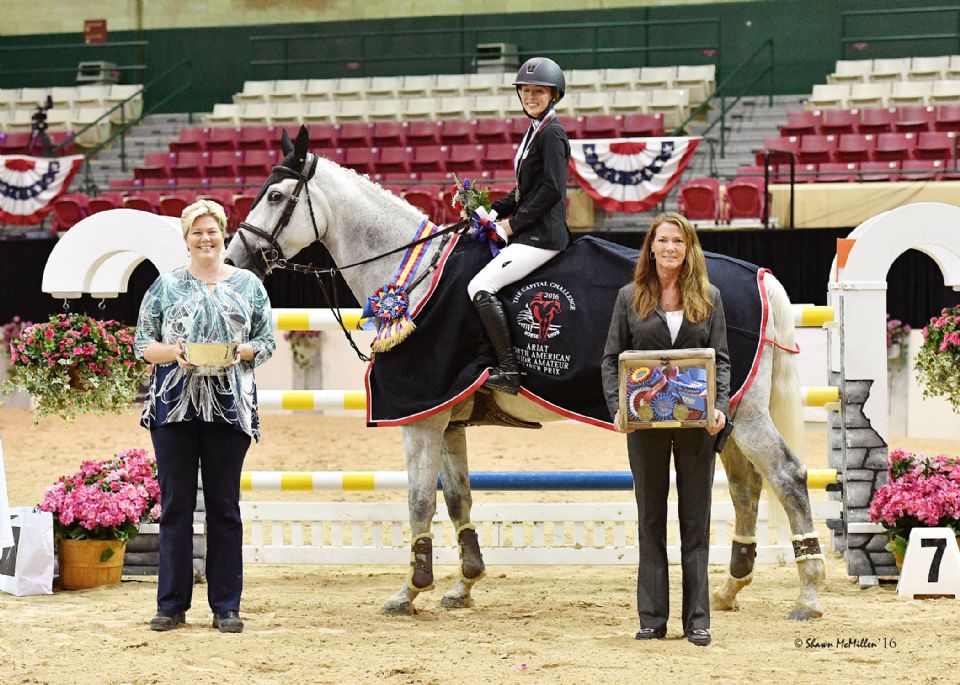 Thirteen-year-old Sophie Gochman of Palm Beach, FL, stepped into the winner’s circle for top honors for the second year in a row. She rode Bit of Love, a 10-year-old Welsh Pony Cross gelding by English Lad, to the Small Pony Hunter championship, sponsored by Mike and Alexandra Borissoff Wright, with two firsts, two seconds, and a fourth. Alexa Lignelli and IParty were the reserve champions. They won the under saddle and were second, third, and fifth over fences.

Last year, Gochman won the top prize on Love Me Tender, and Bit of Love was reserve champion in the Smalls. She believes that it is the time they have spent together that has resulted in the upgrade in prizes for 2016.

“I think our bond has grown bigger,” she explained. “I’ve been riding him for about two years, so I know all of his quirks. I know what rhythm I’m supposed to ride him on, and he knows how I ride too. It’s the bond that’s improved us.”

Gochman said that Bit of Love is “a bit of a diva.” She laughed, “He’s very cute (and) very tiny. He knows he’s very pretty. He thinks that everyone has treats for him. He at first seems a little bit feisty, but he really just wants to snuggle and get food.”

She enjoys showing at Capital Challenge because they “highlight the hunters,” and “it really makes them special.”

She said of winning the Grand and Best Rider titles for the second year, “It’s an amazing experience, especially since this is planning to be my last year on the ponies. It’s really nice to have my last Capital Challenge on the ponies, for me to be Grand Champion and Best Child Rider. It means a lot to me and makes it special.”

The champion in the Large Pony Hunters was Timeless, ridden by 12-year-old Erica Felder of Durham, NC, for owner Victoria Haynes. They won two over fences classes and placed second in the under saddle. The reserve championship went to Small Soldier, ridden by Augusta Iwasaki and owned by Iwasaki & Reilly, who won the under saddle and was second in two over fences classes.

Champion in the Medium Pony Hunters, sponsored by Rosemont Farm, was Highlands Heaven Sent, ridden by Luke Jensen for Bill Schaub. They placed first and second over fences. Reserve champion in the division was Blue Chip, ridden by Caroline Passarelli and owned by Heritage Farm, Inc. They jumped to first, third, and fourth over fences.

Luke Jensen traveled to the winner’s circle for two more awards. The EMO Trip of the Show for Ponies also went to Jensen and Highlands Heaven Sent for their score of 88. Jensen was awarded the Stewart Warner Cup for pony riders, given in memory of Laurie Gilbert Stewart & Mary Warner Brown by Donald E. Stewart, Jr. and Louise W. Serio. It is awarded to up-and-coming junior riders, who, in the opinion of the panel of judges, exhibit the best hunter style and show potential as a young hunter rider.

In the outdoor ring, three more champions were pinned. Topping the Small Junior Hunter 16-17 division, sponsored by Heritage Farm, was Boss, ridden by Katherine Dash for Laura Wasserman. Boss was the Grand Hunter Champion earlier in the week with John French. They won two over fences classes and the under saddle. The reserve championship stayed in the family as Laura Wasserman’s Fine Design took the tricolor with Hunter Siebel. Fine Design was second and third over fences and sixth in the under saddle.

Hunter Siebel returned to the winner’s circle in the Large Junior Hunter 16-17 division, sponsored by Beacon Hill Show Stables and Stonehenge Stables. She rode Pure Abundance, owned by Mountain Home Stables, to first and second over fences and second in the under saddle ribbons. Brett Burlington and Due West, owned by Popish Farms LLC, were the reserve champions. They placed first, third, and sixth over fences and were fifth in the under saddle.

Pomodoro and Hensley Humphries finished as champions in the Children’s Hunter Pony division, sponsored by the Rizvi Family. They were first over fences and sixth in the under saddle. The reserve champions were In The Game and Emma Sameth, who rode for Caroline Tinsley. They won an over fences class.

The winner of the Junior World Champion Hunter Under Saddle class, sponsored by Sweet Oak Farm, was Rockette, ridden by Sophie Gochman for Ramble On Farm.

Sandra Zimmerli Finds the Way to Win with Zaza

Victory in the $10,000 North American Junior/Amateur-Owner Jumper Challenge Cup Final Round, sponsored by Johnson Horse Transportation, went to Sandra Zimmerli and Zaza. They were the fastest double clear out of four in the jump-off, in a time of 32.172 seconds. Second place in the class went to Lauren Fischer on Offenbach du Granit, who stopped the timers in 34.638 seconds. Haley Schaufeld and Harley 86 were third with a time of 33.131 seconds with four faults in the jump-off.

Sandra Zimmerli (18) of Fairfax Station, VA, first sat on Zaza, a 12-year-old Holsteiner mare by Casco owned by River Farm Sporthorses, four days ago, but the chance meeting led to a first-time win for Zimmerli at Capital Challenge. Zaza is available for lease, and owner Haley Schaufeld asked Zimmerli if she could show the mare here.

“She's an amazing horse,” Zimmerli said. “She's quite forward - a lot more forward than my horse. She'll really take you to the jump. You just have to wait; you don't want to gun at anything. I love her so much. She’s really adjustable, and you feel like you can win any class, honestly. For tonight I had no doubt I would be clear with her. She just gave an amazing feeling.”

Zimmerli, who normally trains with Conor O’Regan, competed at Capital Challenge last year with her own horse. “I like the show a lot,” she said. “I think it's a great start before you go to Harrisburg and Washington. Since the classes are 1.35m and 1.40m, it's a good build up, and it's confidence for horse and rider. I've always dreamed of winning at an indoor show so this is awesome.”

For her win in the final round, Zimmerli was presented with the Remy Martin Perpetual Trophy, donated by Rolling Acres and Melanie Wright. She was also the overall winner of the North American Junior/Amateur Jumper Challenge Cup and was awarded the Ariat Congressional Cup. The Best Junior Jumper Rider Award, sponsored by South Haven Farm, was given to Zimmerli, while Lacey Gilbertson won the Best Amateur Jumper Rider Award.