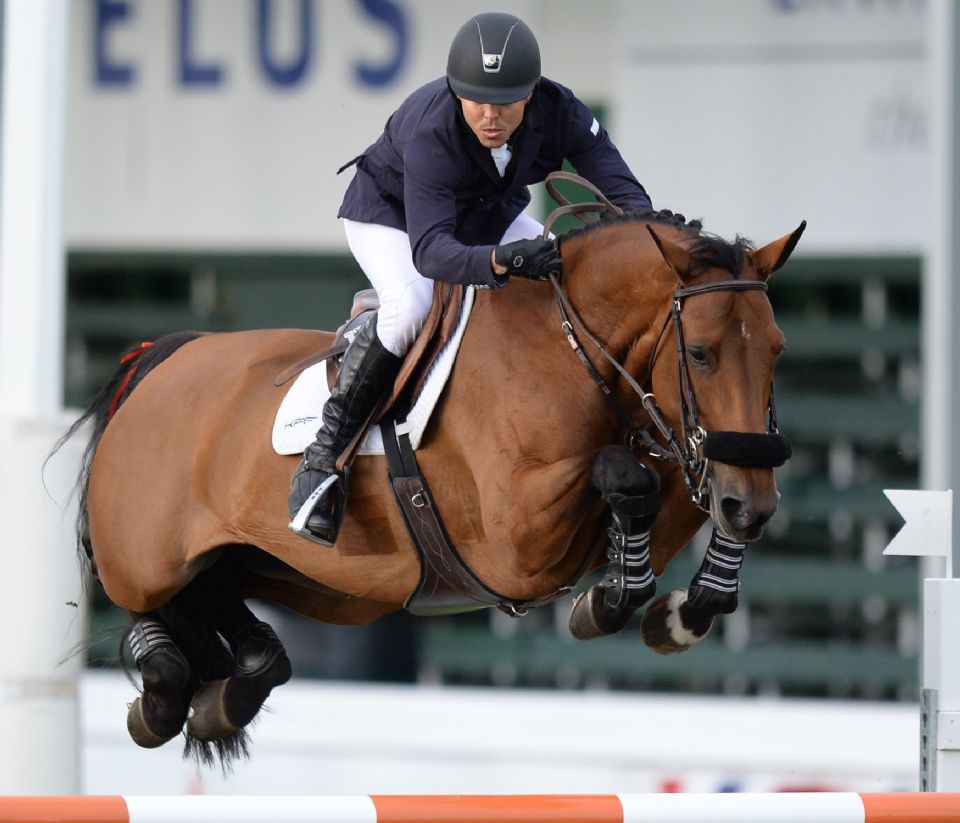 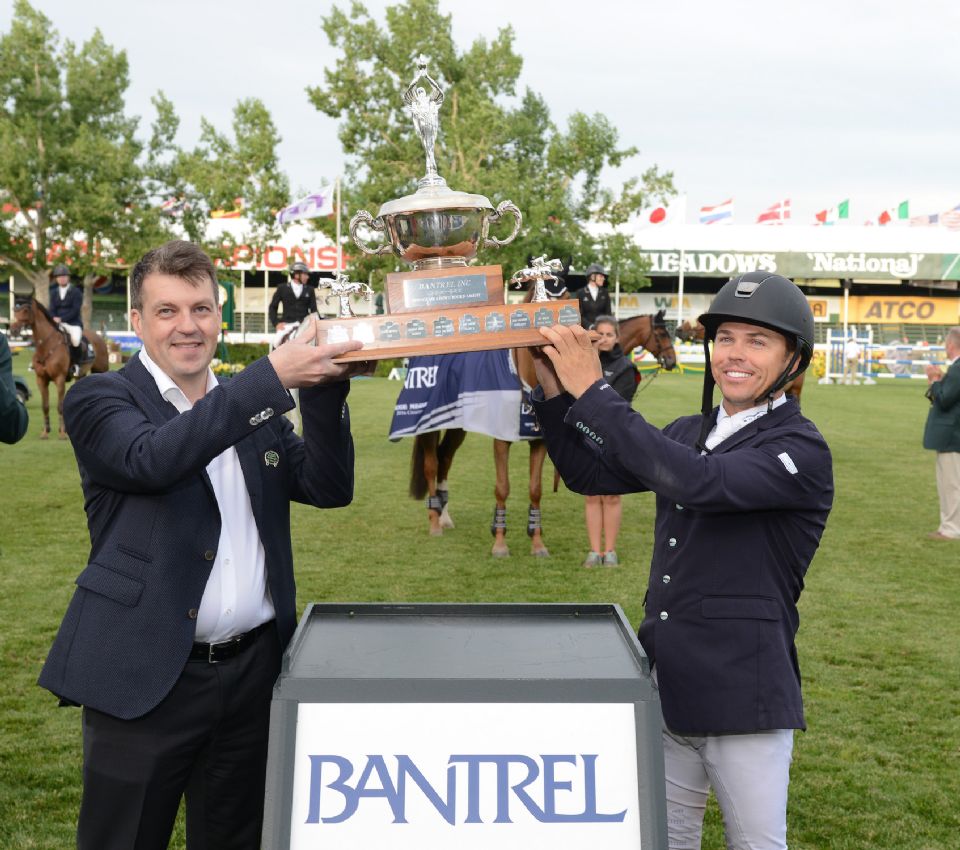 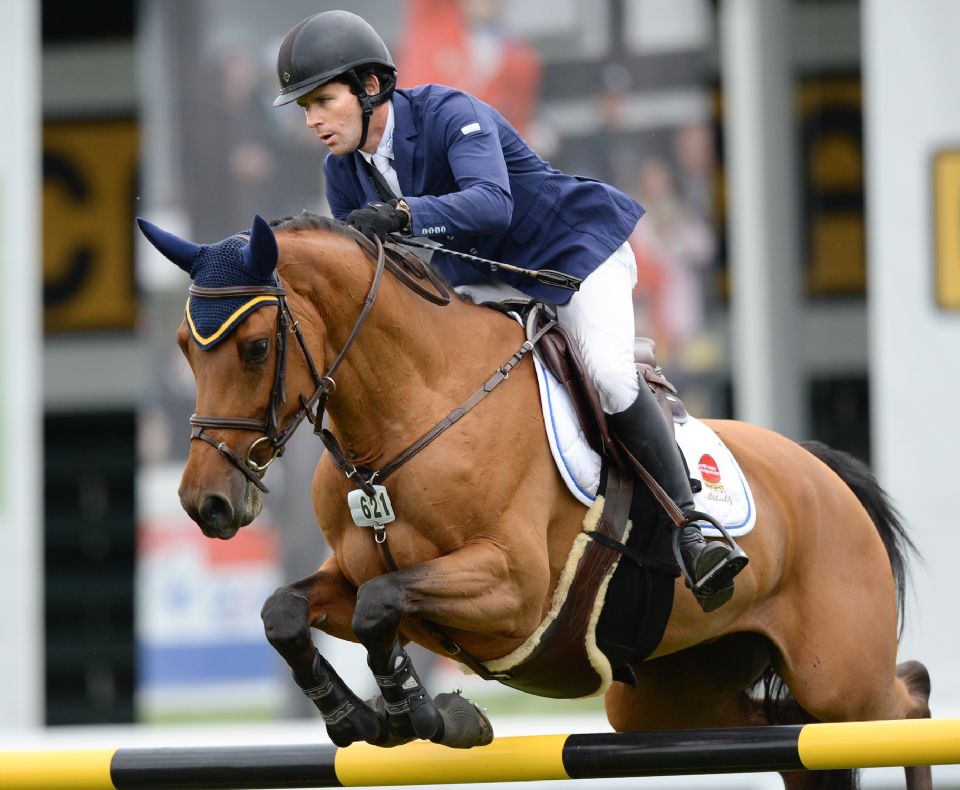 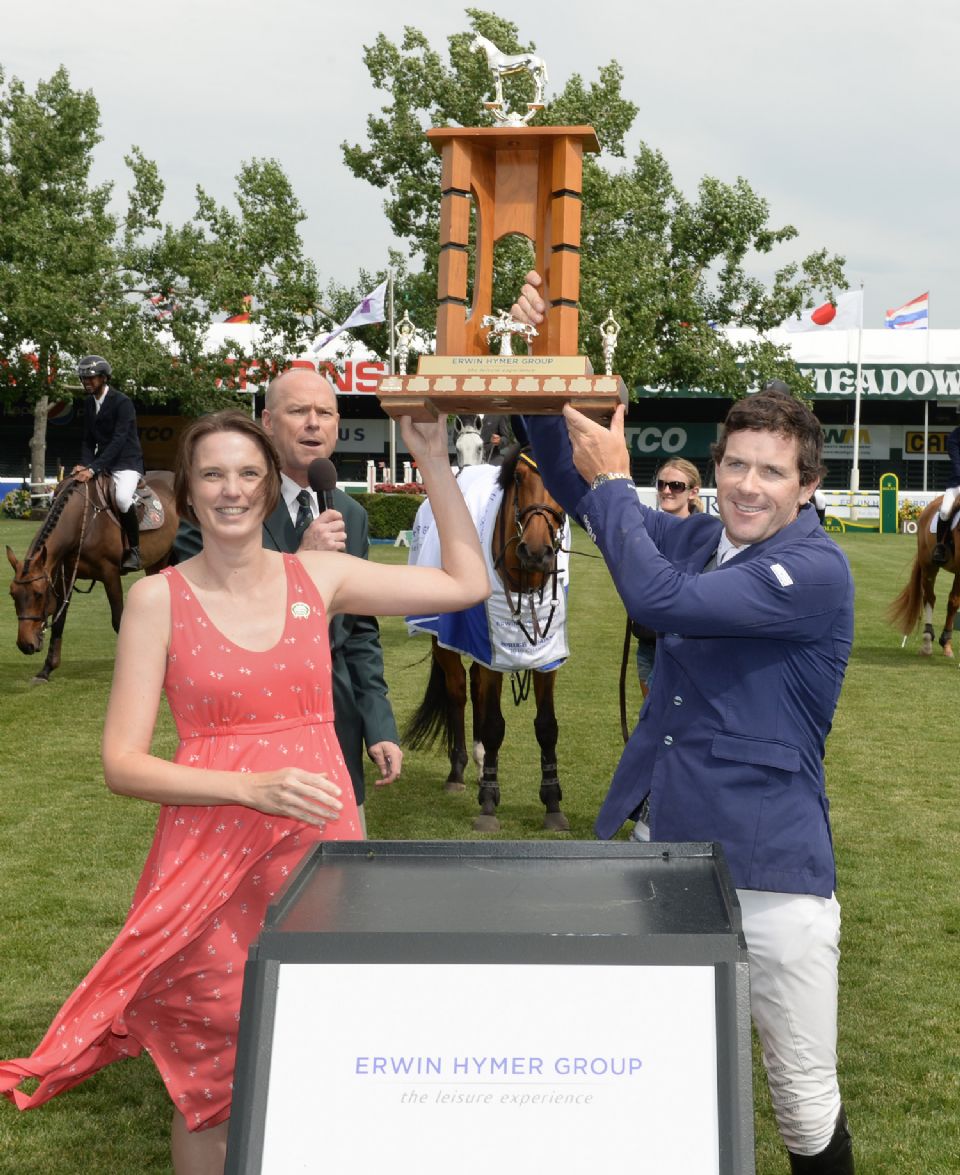 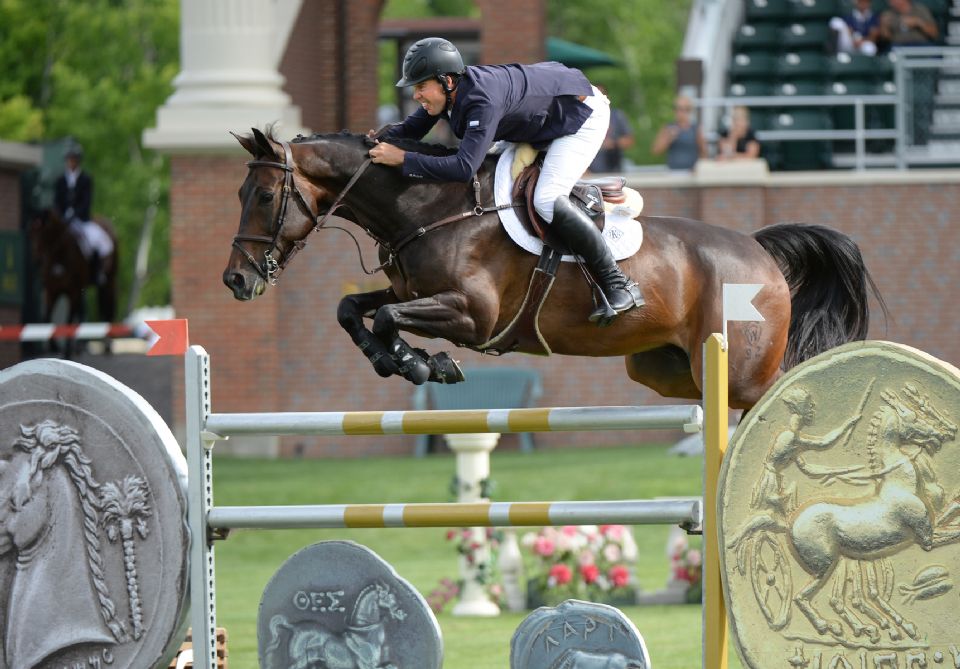 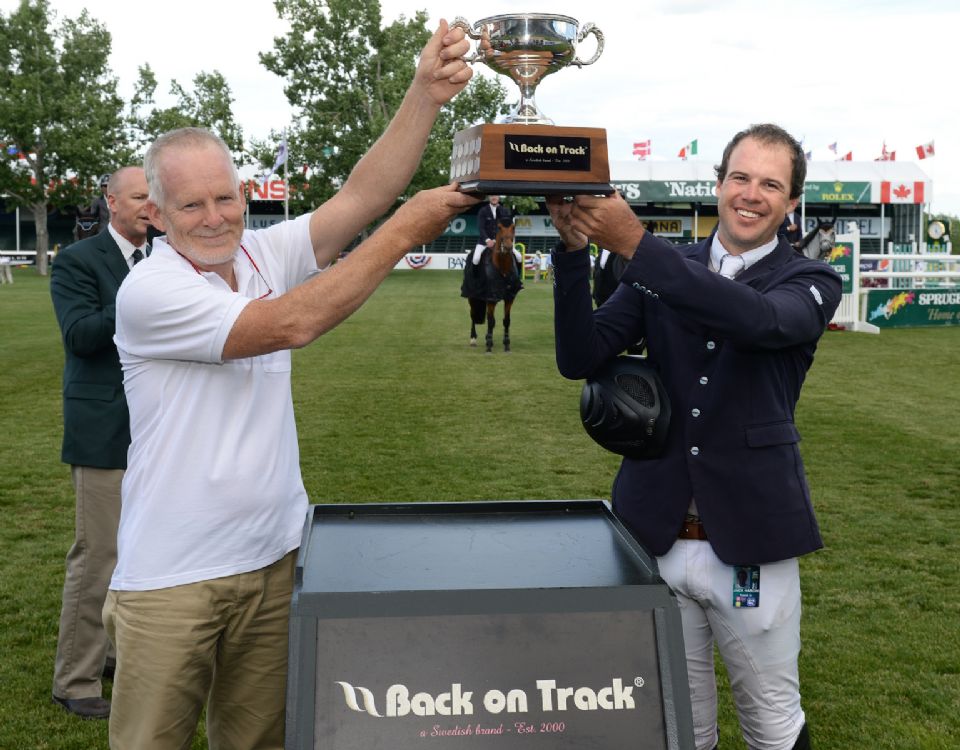 Jack Hardin Towell raises his trophy with Tim McLeod, Advisor to the CEO, Back on Track.
Photo by Spruce Meadows Media Services

The Spruce Meadows Summer Series kicked off competition on Wednesday, June 8, with some of the best show jumpers in the world riding for top honors in the ‘National’, presented by Rolex. Kent Farrington (USA) won the highlight competition of the day, the Bantrel Cup 1.55m, with Gazelle. Conor Swail (IRL) and Cita were the fastest to capture the Erwin Hymer Group Cup 1.50m, while Jack Hardin Towell (USA) and Lucifer V won the Back on Track Cup 1.50m. The CSI 5* tournament continues through Sunday, June 12.

Highlights of the week’s competition include the $500,000 RBC Grand Prix, presented by Rolex, on Saturday, June 11, and the $175,000 CNOOC Nexen Cup Derby on Sunday, June 12. The course designer in the International Ring for the ‘National’ Tournament, presented by Rolex, is Guilherme Jorge of Brazil, who has been tapped to design for the 2016 Olympic Games in Rio de Janeiro.

Five of 29 starters in the Bantrel Cup 1.55m found the clear track to the jump-off, with pathfinder Eric Lamaze (CAN) and Fine Lady 5 taking the shortened course first. Their blazing time of 39.95 seconds would have been good for the win, but a rail down left them in fourth place.

Next in were Farrington and Gazelle, who were quick with less risk to go to the top of the leaderboard, clear in 42.18 seconds.

“I know Eric well, and I know that horse very well,” Farrington said. “I knew that was going to be the speed of the class, so I wanted to be sure to watch him go so I knew what I had to do. When he had a rail down, I thought I would go more measured than I had planned, but put enough pressure where the others had to go. He was really going all out there, and it would have been hard to beat if he hadn’t had that rail.”

Antonio Chedraui (MEX) and La Bamba were also clear in 46.83 seconds, which placed them third. Tiffany Foster (CAN) and Victor landed in fifth place with a time of 43.01 seconds and four faults.

Last to go, Yann Candele (CAN) and Showgirl slotted into second place with a strong time of 44.06 seconds despite a slip on course.

Candele said, “She’s in aluminum shoes. It makes the foot slippery even with caulks. Even with that, I saw the time. Even if I made both turns, it would be close, but I don’t think it would make the win.”

Gazelle, a 10-year-old Belgian Warmblood mare by Kashmir Van Shuttershof x Indoctro owned by Farrington and Robin Parsky, was Farrington’s mount for the 2015 Pan American Games in Toronto where they won the team bronze medal. Farrington noted that she is learning to be a good grand prix horse, and the plan for her time at Spruce Meadows is to gain mileage in bigger competitions.

All three riders commended Spruce Meadows on their improvements since last year. Candele noted, “The facility looks great, and as usual there has been some upgrading. It’s going to be great sport.”

Farrington added, “I love riding on grass. It’s one of my favorite parts of Spruce Meadows. The horses jump well on grass, and it’s better for them.”

Chedraui complimented, “I really love the place. I’ve been able to show many places in the world, and it’s pretty hard to find a place like this. Not only the footing, the stables, the warm-up rings that every year get better and better, but also the people and the ambience that you produce here. I think it’s really the best of the best.”

There were 38 entries in the first competition of the year on the field of the International Ring in the Erwin Hymer Group Cup 1.50m. It was held as one round for speed, and the fastest of the day was Ireland’s Conor Swail on Cita, a 10-year-old Holsteiner mare (Casall x Pik Romero) owned by Susan and Ariel Grange. Swail and Cita scorched the field by putting in a time of 65.46 seconds with no faults.

Five seconds behind was Canada’s Olympic gold medalist Eric Lamaze on Melody des Hayettes Z, owned by Artisan Farms LLC. They posted a clear round in a time of 70.45 seconds. Third place went to Antonio Chedraui (MEX) on Corcega La Silla in 73.72 seconds. Nayel Nassar (EGY) and Acita placed fourth in 75.33 seconds, while Antonio Maurer (MEX) on Galileo de Laubry was fifth in 75.90 seconds. There were seven clear rounds.

Swail and Cita were first paired last August, and he took his time with the “unbelievably careful” mare. This spring they won in Palgrave and Langley before topping the first competition at Spruce Meadows.

“She’s been amazing,” Swail said. “To go straight into that ring and jump 1.50m, and to do it the way she did it…I mean, she won by five seconds. I did a couple of turns that no one else did, and that’s basically I think where most of the time came from. I did an inside turn there, and when I did it and I saw the angle that I was at, I thought it was an awful, bad idea on my behalf. She was incredible to jump it.”

Swail plans to attempt his first derby at Spruce Meadows on Sunday in the CNOOC Nexen Cup Derby with Cita, and it will be her first derby as well. He feels confident though that her carefulness and energy will carry them well through the challenging competition.

“We’ve trained all the stuff at home, and she’s like, ‘No problem, no problem.’ There’s so much quality (that) when I’m jumping fence 24, I’m not going to run out of engine, that’s for sure. I like doing derbies but unless I’m in it to win it, I don’t want to go in it. The few years I’ve been here, I’ve never had anything suitable. I’ve practiced on her a few times at home, and I feel she’s very good at it and I think she has a good chance on Sunday, even though it’s her first go and mine.”

Another 38 entries went to post for the Back on Track Cup 1.50m speed, and 14 were clear to lead the results. The fastest of those was Jack Hardin Towell (USA) on Jennifer Gates’s Lucifer V, who stopped the timers in 60.86 seconds for victory.

Eric Lamaze had to settle for another second place ribbon today, this time with Artisan Farms LLC’s Rosana du Park. They finished the course in 61.47 seconds. Fellow Canadian Vanessa Mannix and Dooley’s Deluxe were third in 67.13 seconds. Olympic gold medalist Leslie Howard of the United States was fourth with Utah in 68.14 seconds, while Ian Millar (CAN) and Teddy du Bosquetiau were fifth with a time of 68.81 seconds.

Towell brought Lucifer V, a 10-year-old Westphalian gelding (Lord Pezi x Grandeur) to Spruce Meadows last year with some success. He has grown into one of Towell’s top grand prix horses, performing well at CSI 5* events. After a month’s break following the winter season, Towell decided to step Lucifer V down this week while his second mount, New York, does the grand prix.

“There’s nothing like being over-horse-powered in a class!” he laughed. “I thought I would give it a little bit of a go. He jumped quite well, and he feels good. He always jumps well here. It was nice to step him down and go in there for both our confidence, together.”

With age comes wisdom, and Towell feels lucky that both of his top horses are maturing and growing.

He said, “It’s amazing how much they’ve grown in a year’s time. This class last year, Lucifer went in. I probably would have been close to winning, and then he saw something, spooked, and reared. It’s nice that both of my horses are 10 years old now; they’re a little older and more experienced. I feel like they’re coming along well.”