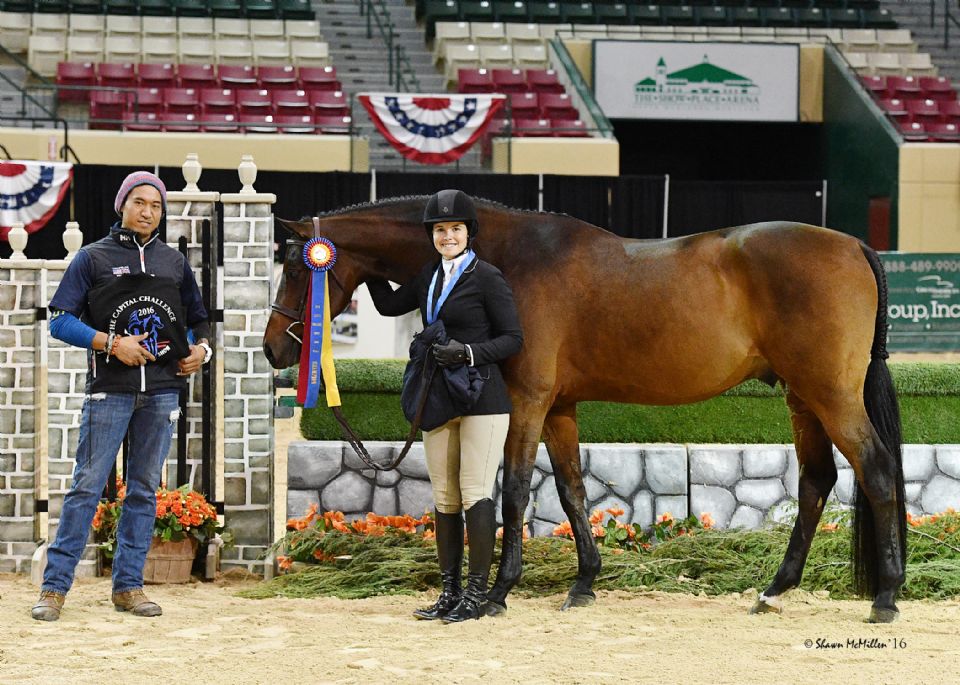 Stephanie Danhakl rode Quest to the championship in the Amateur-Owner 18-35 3'3.
Photo by Shawn McMillen Photography 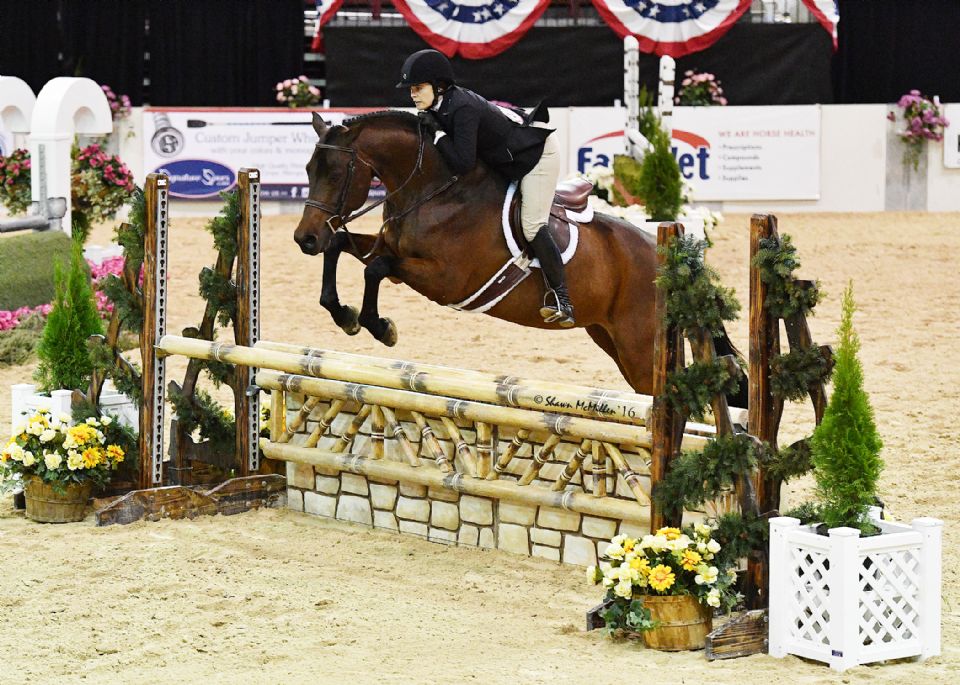 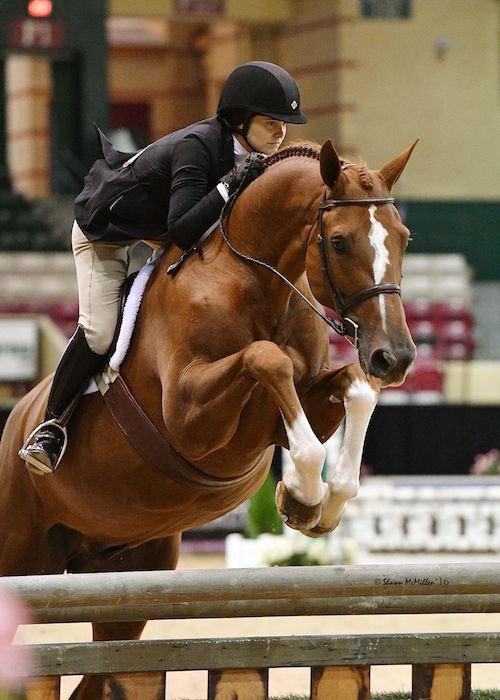 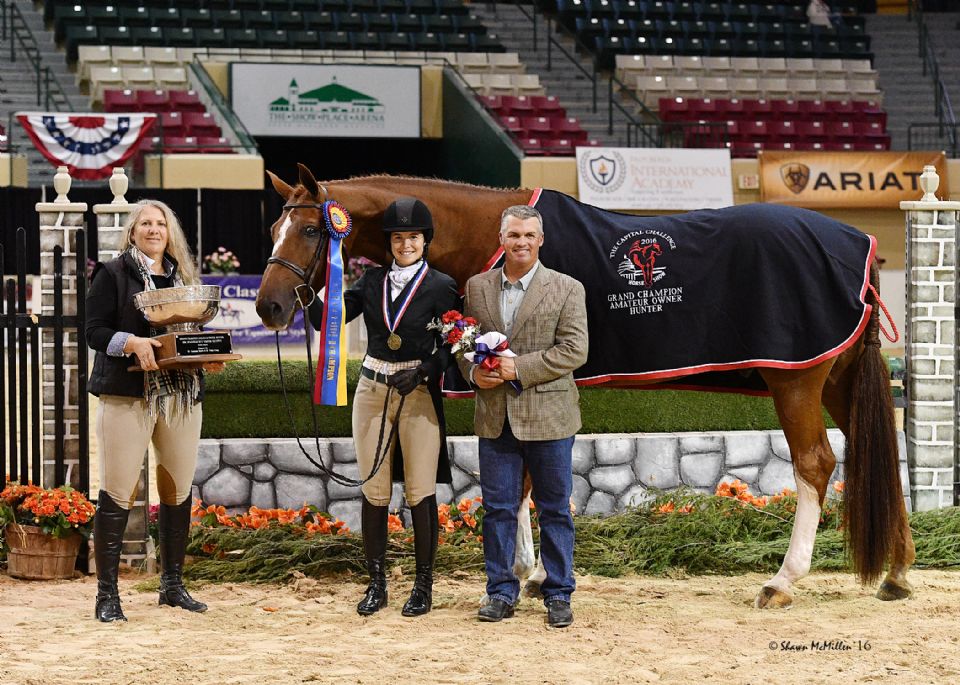 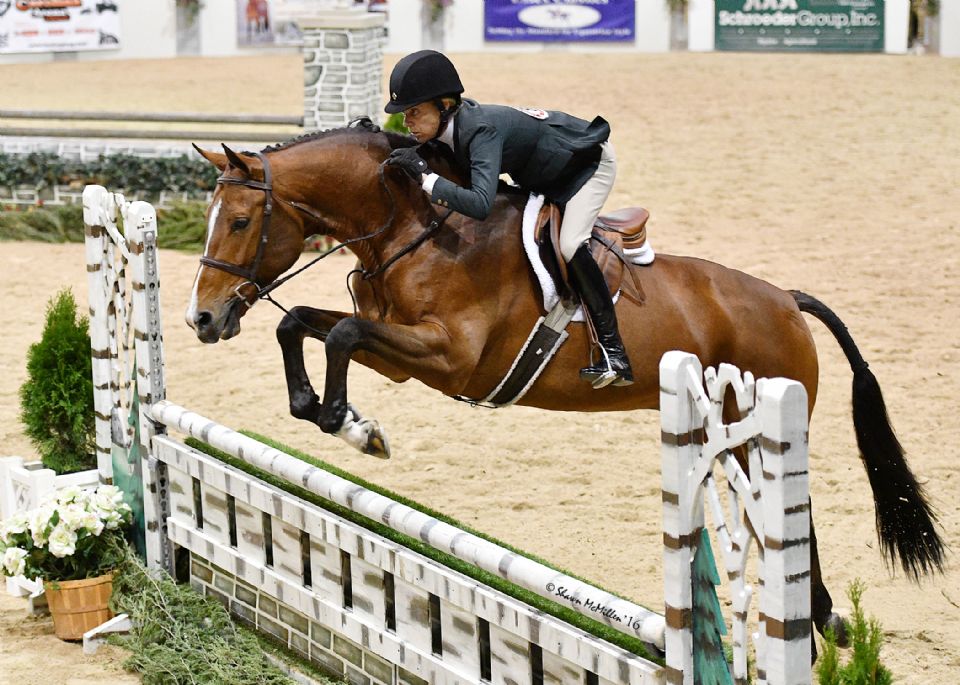 Jane Gaston and Because.
Photo by Shawn McMillen Photography 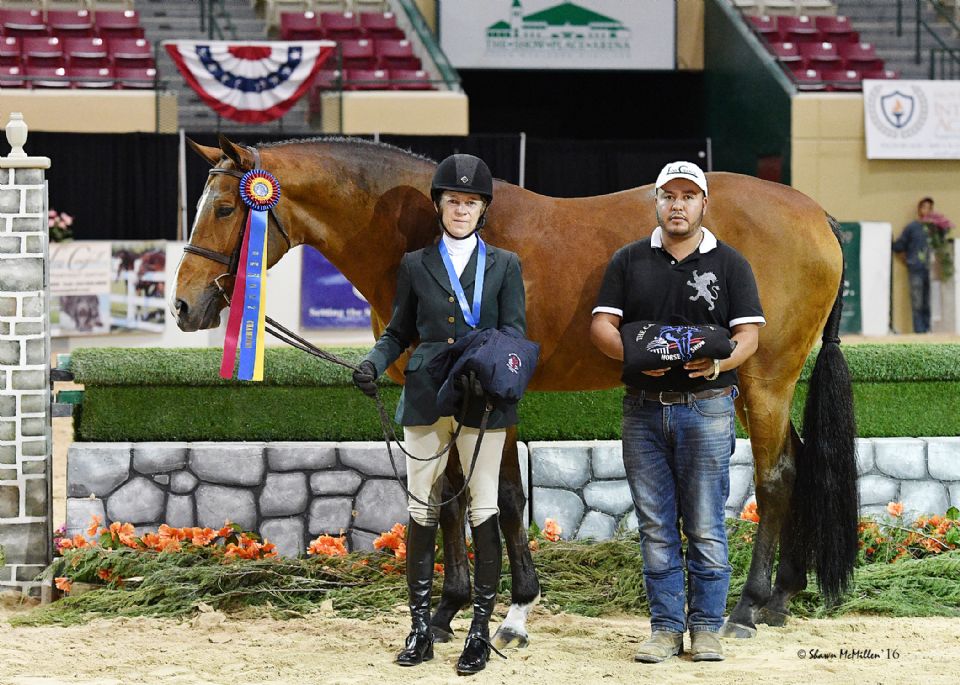 The championship in the Amateur-Owner 36 & Over 3’6” Hunters went to Jane Gaston and Because.
Photo by Shawn McMillen Photography 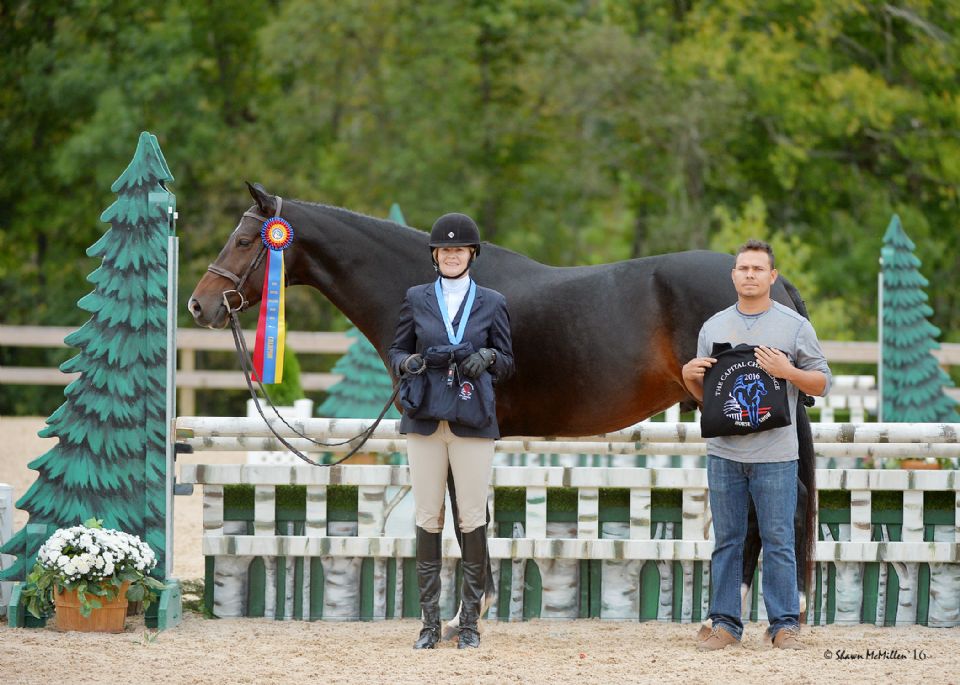 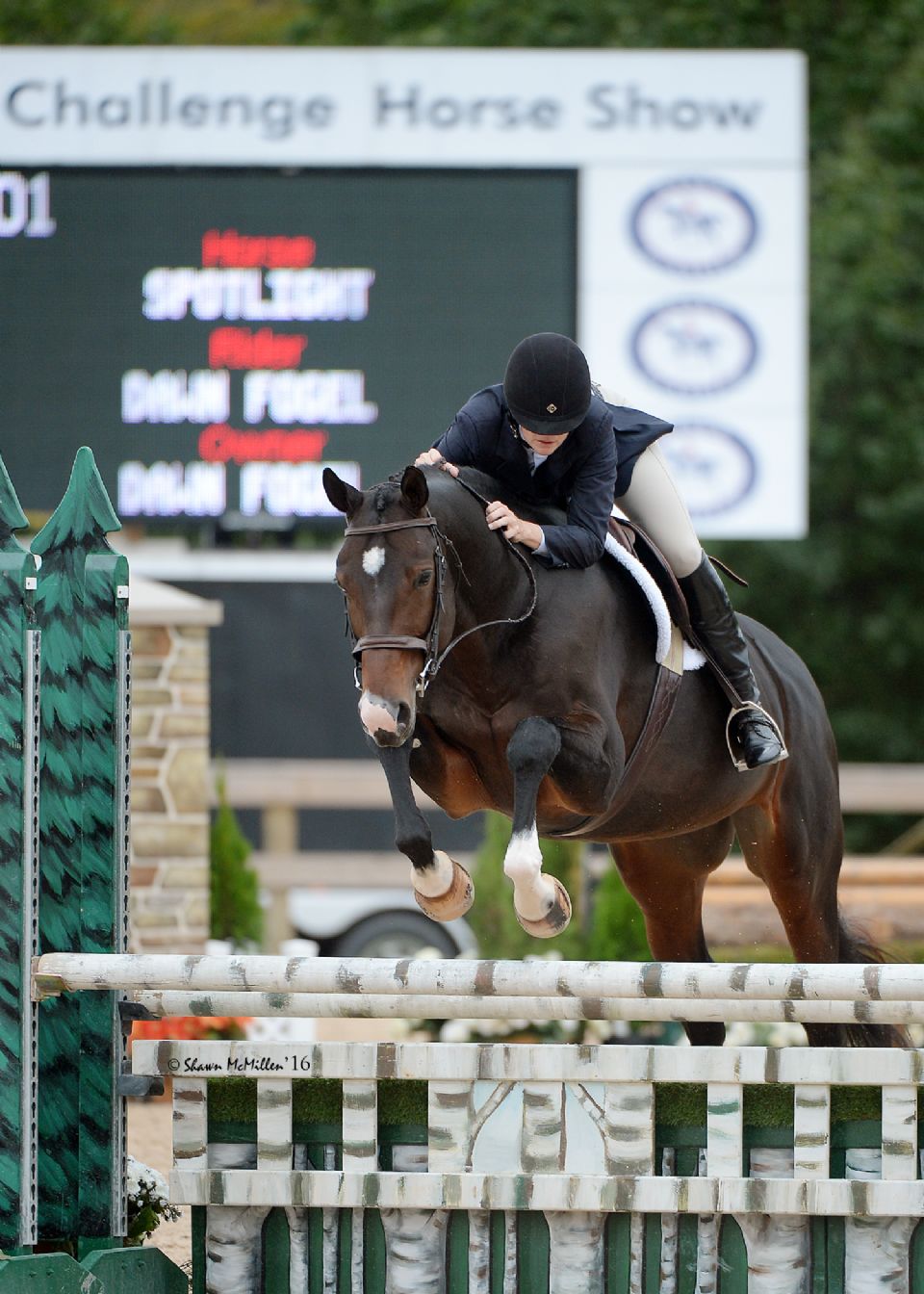 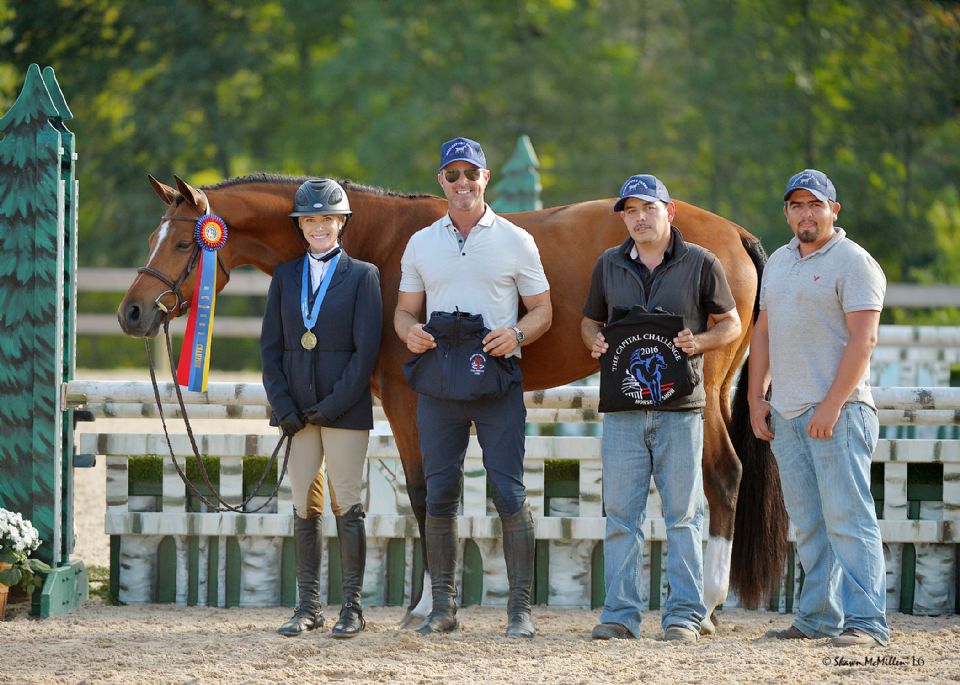 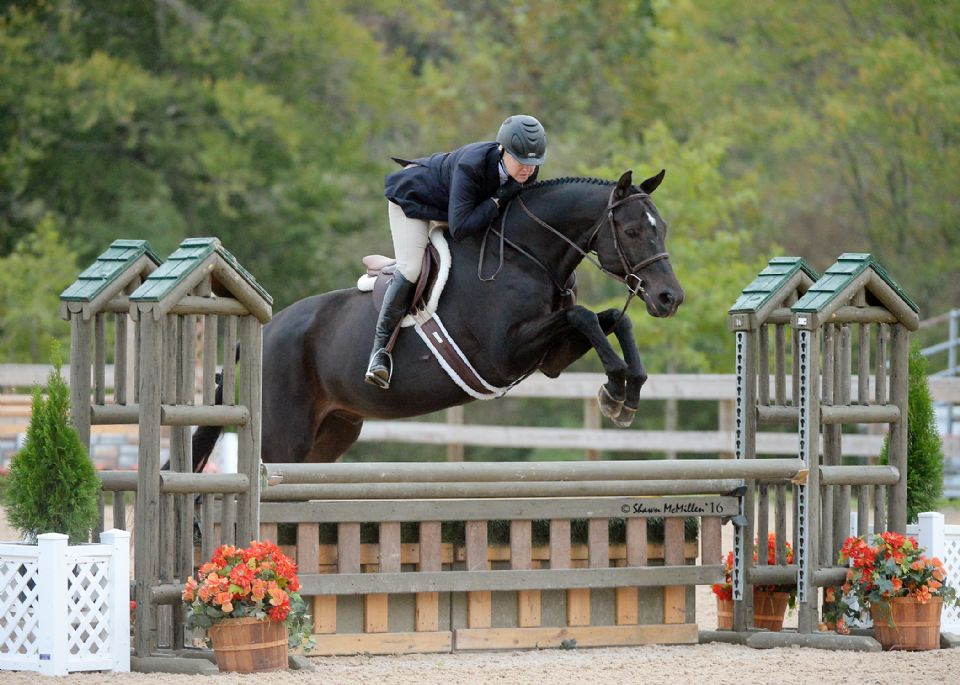 The Adult Amateur 51 and Over Hunter championship went to Lisa Cox and Castleton.
Photo by Shawn McMillen Photography 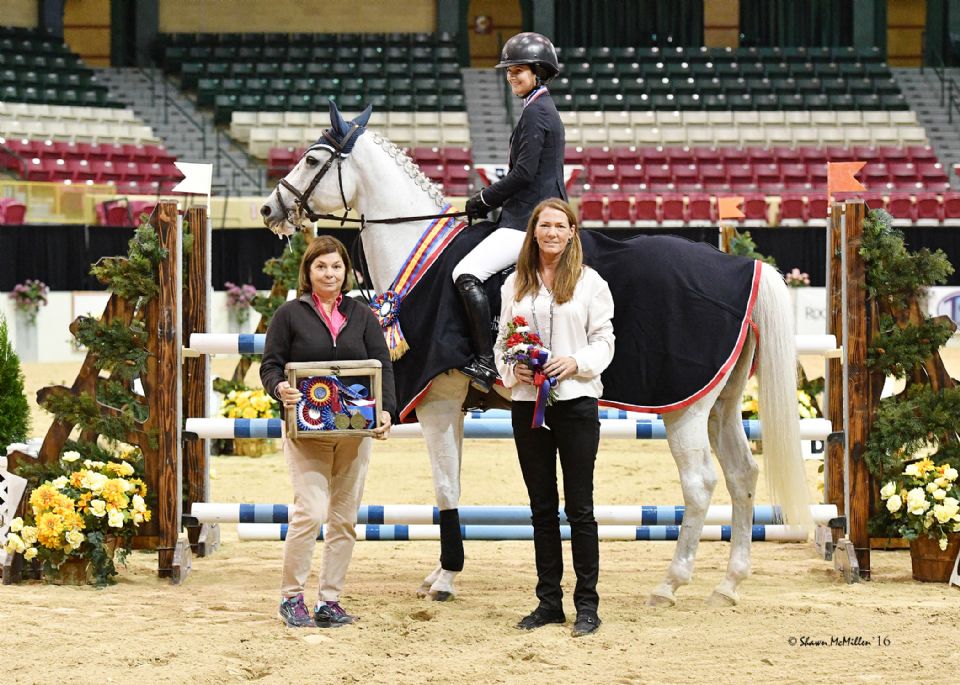 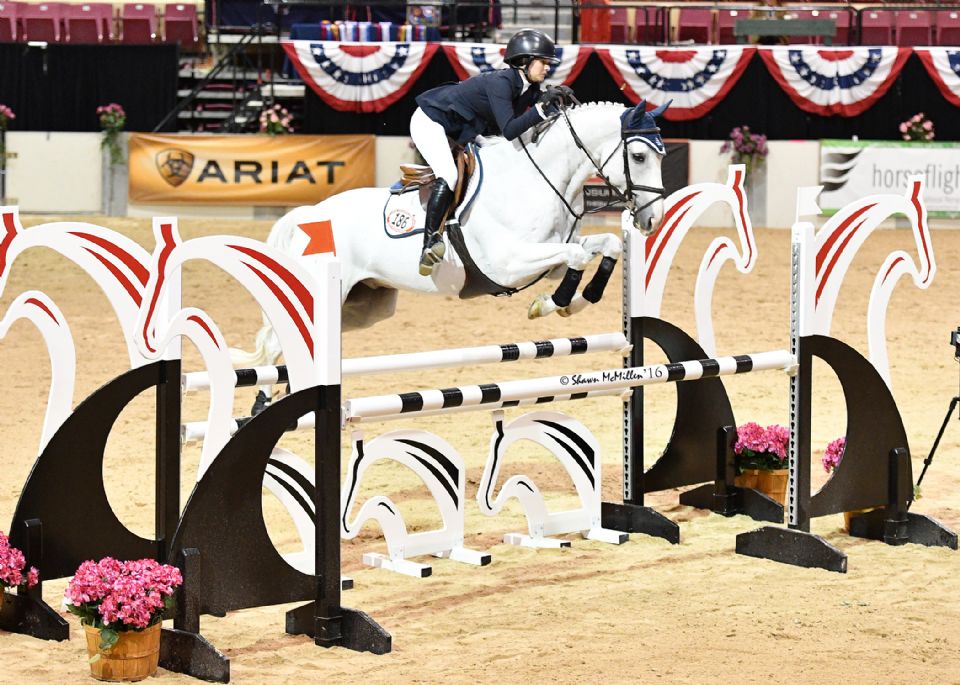 Stephanie Danhakl, of Pacific Palisades, CA, swept the Grand Amateur-Owner Hunter Championship and all four of the Amateur-Owner 18-35 Hunter championships and reserve championships. Dawn Fogel and Spotlight won the Grand Adult Amateur Hunter Championship. During the evening session, Lindsey Tomeu and Bonapart were the fastest in a large jump-off field to win the $10,000 Children’s/Adult Jumper Challenge. The Capital Challenge Horse Show continues through Sunday, October 9. Every class of the show is live streamed and available to watch online at tv.coth.com or www.capitalchallenge.org.

Danhakl’s impressive domination of the day’s Amateur-Owner Hunter championships began with the division win in the Amateur-Owner 18-35 3’3” Hunter division, sponsored by Serenity Farm and Endeavor Farm. Danhakl rode her nine-year-old Warmblood gelding, Quest (by Verdi), to two firsts and a second over fences before taking the championship. Danhakl earned the reserve championship aboard Enough Said with two seconds and a first over fences and a fourth under saddle.

“Quest loves this horse show,” Danhakl said of the gelding that she purchased from Scott Stewart three years ago. “He was great all week. He loves it here, so it's great to be here. I really love riding in this indoor ring. I think it suits my horses. I was really happy with every round, and my horses were great here.”

“Golden Rule has a special place in my heart,” Danhakl said. “I really feel like he takes care of me. Anything could go wrong, and he has my back. He would do anything for me. That’s why I really love him.”

The reserve championship in the Amateur-Owner 18-35 3’6” Hunters went to Danhakl and her seven-year-old Hanoverian stallion First Light (by Monte Bellini).

“First Light is one of my newer ones,” Danhakl said. “I just started showing him in the 3'6" this year, and he's beaten Golden Rule a couple of times. It was nice to see Golden Rule win today. All of my horses are always neck and neck. It depends on the judges and how I ride, but I'm very lucky to have all of them.”

While Danhakl’s performance on Thursday was particularly impressive, she is no stranger to great success at the Capital Challenge Horse Show, as she similarly swept both of Grand Amateur-Owner Hunter Championships in 2014, and the show continues to be a favorite for the accomplished rider.

“It's really nice to show in such competitive divisions with so many people,” Danhakl said. “This show attracts riders from all over the country. It really feels special to be here and have a division of 35 people. They really make a big deal of the hunters here so it's also fun to watch and fun to see the hunters in the spotlight.”

The championship in the Amateur-Owner 36 & Over 3’6” Hunters, sponsored by Mr. & Mrs. Ernest Oare, went to Jane Gaston of The Plains, VA, and Because, a nine-year-old Dutch Warmblood stallion. The pair claimed two blue ribbons over fences on their way to the championship. The reserve champion award went to John Ingram and Airport 48.

“It’s exciting,” Gaston said. “It’s been a few years since I’ve had a horse in the 3’6” that was competitive to do this. Because was never a hunter before this year. He obviously likes this hunter job. I think for a horse to come out of the jumpers and to do what he’s done in his first year of being a hunter is awesome.”

Gaston also earned the EMO Best Amateur-Owner 3’6” Trip of the Show with an 88.5.

The Adult Amateur Hunter Grand Championship, sponsored by Steve Martines, went to Dawn Fogel of Louisville, KY, and Spotlight, a six-year-old Hanoverian gelding. The duo topped both of the over fences classes and finished fourth in the under saddle of the Adult Amateur 36-50 Hunter division. The reserve champions were Paddington and Tonia Cook Looker, who rode for Lexie Looker.

For the championship, Fogel was presented with the Equus Entries Challenge Trophy, donated by Equus Entries and Sue and Ralph Caggiano, and the Best Adult Amateur Rider Award, sponsored by Phoebe Weseley and River Run Farm, LLC. Fogel and Spotlight also received the Best EMO Adult Amateur Trip of the Show, presented by the EMO Agency, when they scored an 89.

“I was really excited,” Fogel said. “He’s never shown here, and he’s a young horse. I was thrilled with the way that he coped with the surroundings. Some horses can get undone when they walk in this ring. There’s a lot going on. The jumps here are more impressive than what we see throughout the year. He dealt with all of that really well.”

Fogel continued, “He goes with a very soft feel, which is the way that I like to ride. He has his head out and down just naturally. You don’t have to ask him for his head. He just has it there. Then it’s just a light feel to the jumps.”

Fogel has seen great success in the Adult Amateur Hunter and Amateur-Owner Hunter divisions throughout the country, including at the Capital Challenge where she’s been competing since 1995.

“It’s a special show,” Fogel said. “It’s always a thrill to be here. I would say it’s my favorite show to come to every year because of the incredible quality of horses and riders. I enjoy just watching here because things are being done at such a high level.”

Taking the championship in the Adult Amateur 18-35 Hunters, sponsored by Lainie Wimberly and Brigadoon Show Stables, Inc. were Jamee Crawford and Entourage. Crawford and the six-year-old Oldenburg gelding, owned by Legado Farm LLC, finished first and sixth over fences and sixth on the flat. The reserve championship went to Samantha Sommers and Macallan, owned by Amber Ayyad.

In the Adult Amateur 51 and Over Hunters, the championship went to Lisa Cox and Castleton, a seven-year-old Hanoverian gelding owned by The Barracks. The pair finished first and third over fences. James Anderson and Houdini, owned by Patricia Raynes, took the reserve championship with a first and seventh over fences.

Lindsey Tomeu of Wellington, FL, piloted her 15-year-old Belgian Warmblood gelding Bonapart to victory in the $10,000 Children’s/Adult Jumper Challenge. From an original starting list of 62 entries and a fast jump-off field of 22 horses, it was Tomeu who set the winning time at 28.690 seconds. Finishing in second place were Sophie Gochman and Wirina with a time of 30.856 seconds. Rounding out the top three in the class were Emma Seving and Easy Money, who finished in 30.868 seconds.

In their three-year partnership, Tomeu and Bonapart have earned major victories at horse shows throughout the country, including the Pennsylvania National Horse Show and the Devon Horse Show. The pair also currently leads the Washington International Horse Show Adult Jumper standings.

“He is my horse of a lifetime,” Tomeu said. “He is perfect. He has all sorts of funny little quirks, but that’s what makes him amazing. He hates tractors – really hates them. He gets cold very easily. He just has all of these little quirks. I don’t think I could ever replace him. Every single moment I have with him, I feel so lucky.”

Ken Krome set the track for the class that saw a tight time allowed in the first round and a wide range of results from the riders contesting it. Tomeu first navigated the course aboard her other mount, Chandial-Star, but after accumulating three time faults, came back quick and clear with Bonapart.

“I thought it was tricky. The time was definitely a factor,” Tomeu said. “With Bonapart, I just trust him. I zip around. My only concerns really were jump 12 and the double combination on the rail because he shifts right really hard off the rail. Those were my biggest worries, but he was excellent tonight.”

Tomeu has ridden with Sweet Oak Farm and the trainers there, including Ali and Shane Sweetnam and Michael DelFiandra, for her entire riding career, and it was her support team that gave her some final advice as she returned for the jump-off.

“In the jump-off, they said, ‘You have to go for it. If it happens, it happens; if it doesn’t, it doesn’t’,” Tomeu said. “I don’t think I could have gone faster. Everything just showed up perfectly. I’m very lucky that that happened.”

The Capital Challenge Horse Show continues on Friday with the start of the junior and pony hunters, as well as the WCHR Adult Amateur Challenge, the Ariat National Adult Medal Finals, and the North American Junior/Amateur-Owner Jumper Challenge Cup Round 1. The evening session of competition includes one of the highlights of the week, the WCHR Professional Finals, scheduled to begin at 7 p.m.