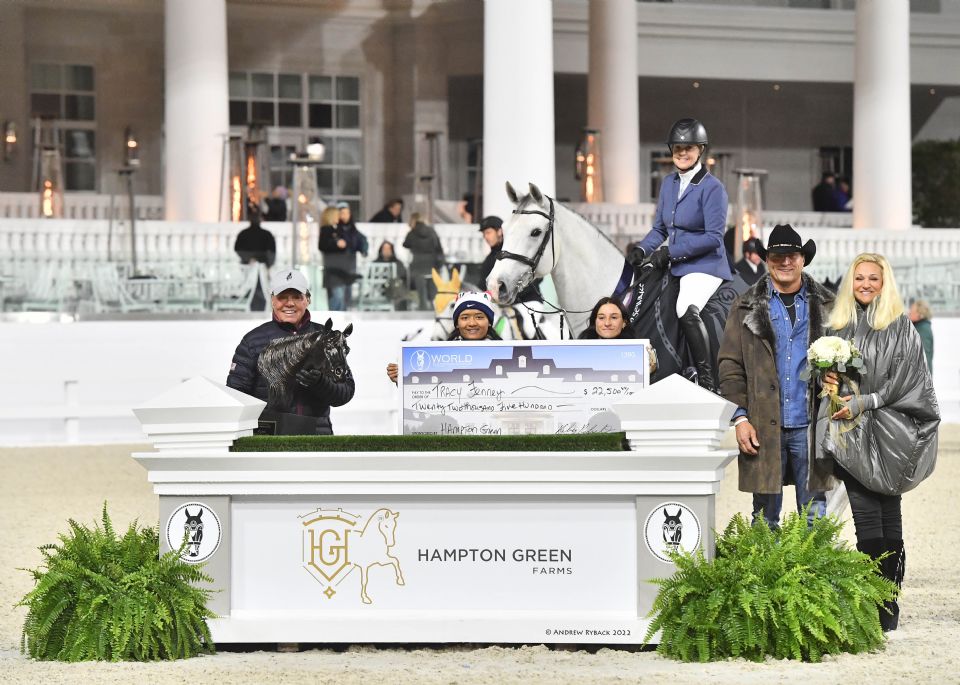 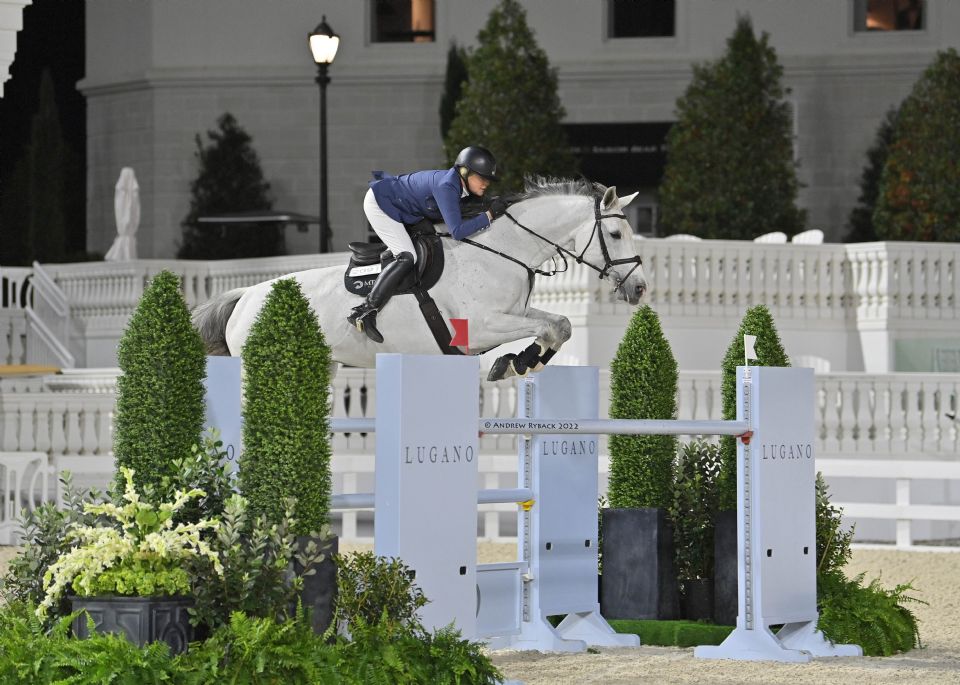 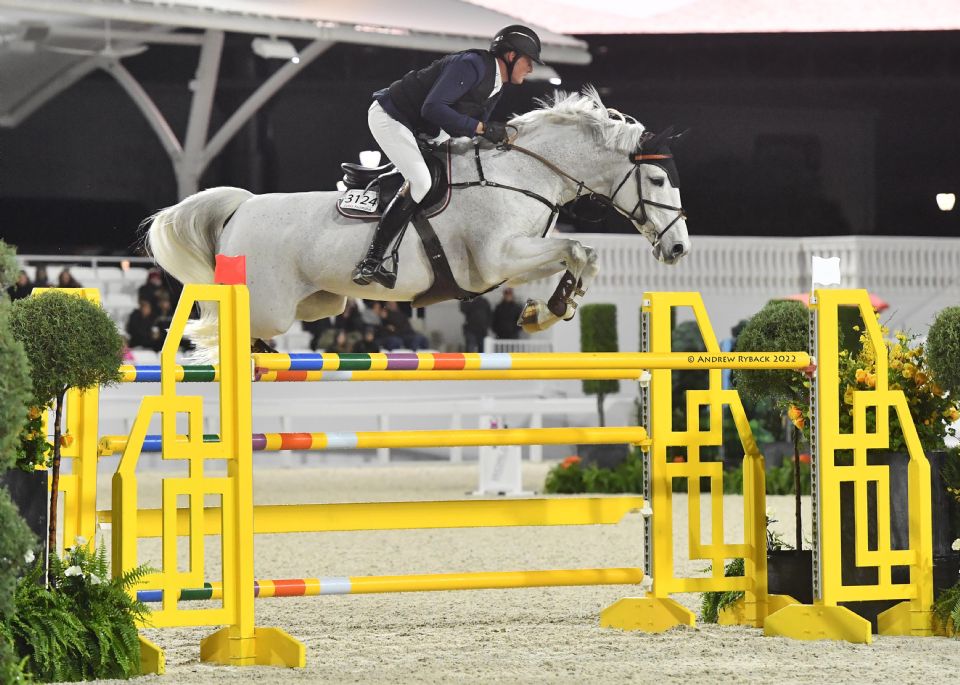 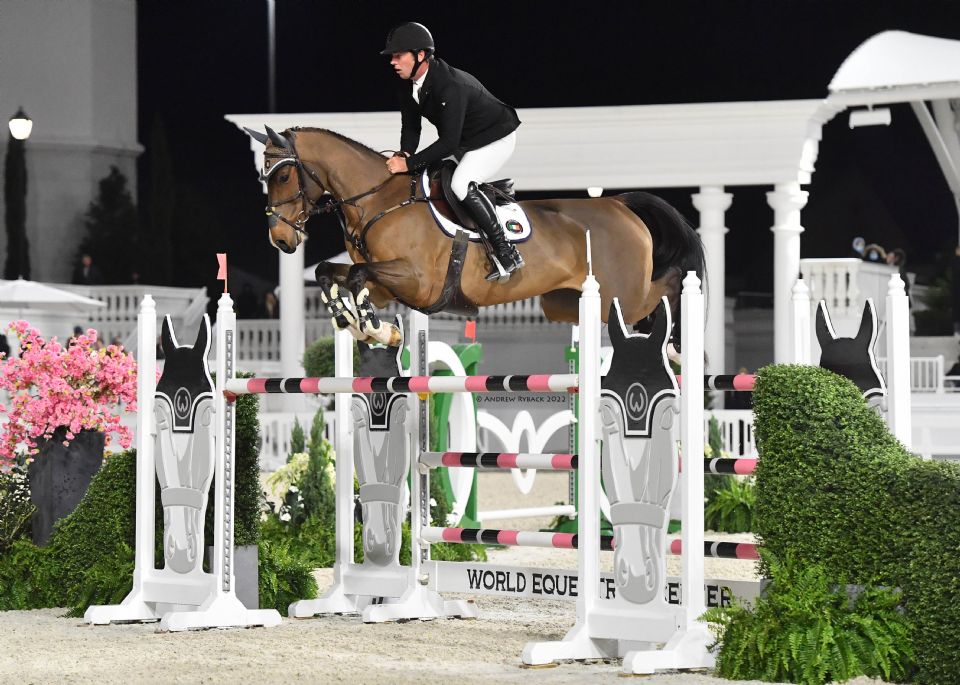 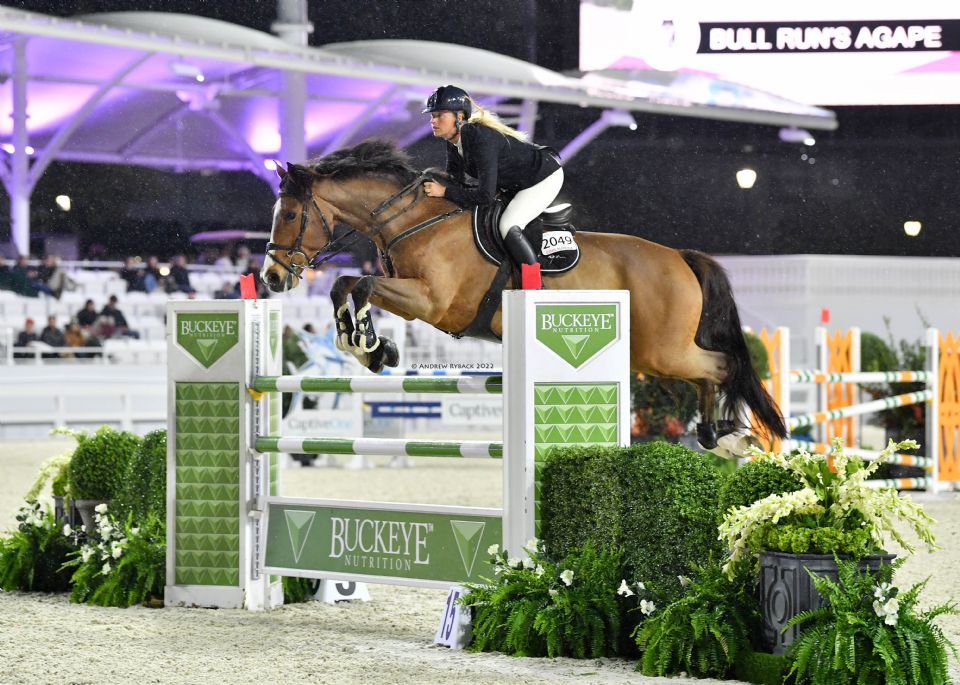 Kristen Vanderveen and Bull Run's Agape took the win in the $10,000 Buckeye Nutrition Futures Prix under the lights.
Photo by Andrew Ryback Photography

Tracy Fenney (USA) and MTM Apple, owned by MTM Farm, could not be caught in the $75,000 Hampton Green Farm Grand Prix on Saturday, January 22, at World Equestrian Center – Ocala during the Winter Spectacular III show in Ocala, FL. Thirty-six horse-and-rider combinations contested the technical course designed by Anderson Lima (BRA) and 12 of those riders continued on to the jump-off. Fenney and the 11-year-old Dutch Warmblood mare delivered a second fault-free round with a quick time of 48.021 seconds to earn the blue ribbon.

“I watched Rowan Willis go on [Wellington Grey Goose], and he was incredibly fast,” said Fenney of watching her competitors in the jump-off. “I knew if he left all the jumps up, he would be impossible to beat. Luckily for me, he had the last one down. I also knew Aaron [Vale] was right behind me and he’s won so many Grands Prix, I knew I was going to have to go pretty darn fast. I did what I had to do, and Apple kicked into high gear.”

Peter Petschenig (AUT) and Brooke Peterson’s Ennebel Van Get Posthuijs were not far behind Fenney and earned second place with a time of 49.189 seconds. Tom Foley (IRL) piloted his own Idalgo to a third-place finish after stopping the clock at 50.384 seconds.

Kristen Vanderveen and her own Bull Run’s Agape took top honors in the $10,000 Buckeye Nutrition Futures Prix held under the lights on Friday, January 21, during the Winter Spectacular III show at World Equestrian Center – Ocala. Vanderveen and the 10-year-old Holsteiner gelding went all out in the jump-off and stopped the timers at 39.974 seconds to take the victory by a three-second lead.
“I am so excited that World Equestrian Center decided to host this class under the lights,” explained Vanderveen. “I think it is fantastic for young horses and upcoming riders. If you had a hiccup in the grand prix last week, this was a good reset to give your horse confidence.”