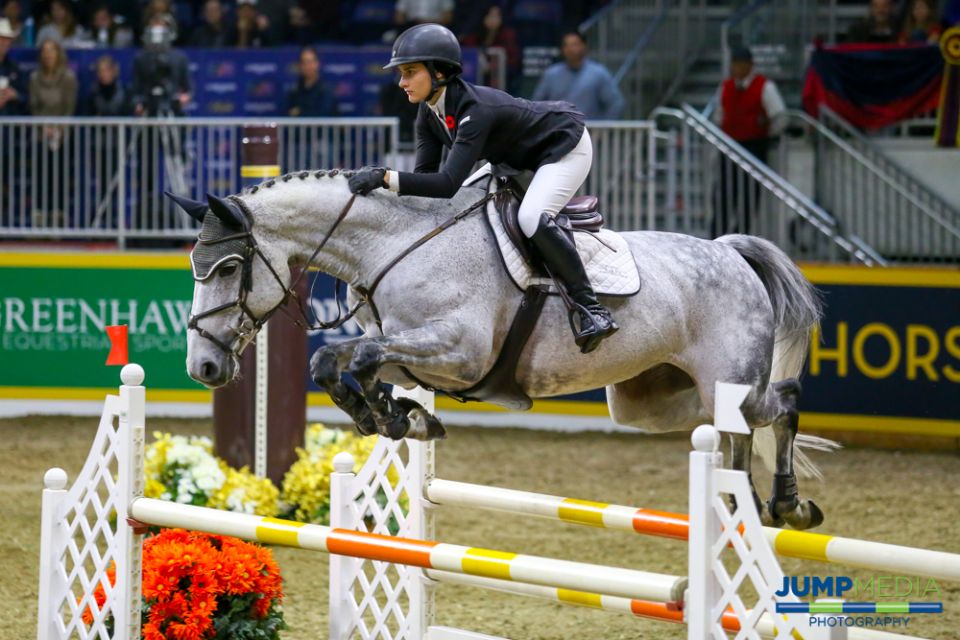 Veronica Bot of Burlington, ON, won the $10,000 McKee-Powell Equine Services Junior/Amateur Jumper Royal Stake on Sunday, November 6 at the Royal Horse Show in Toronto, ON.
Photo by Jump Media 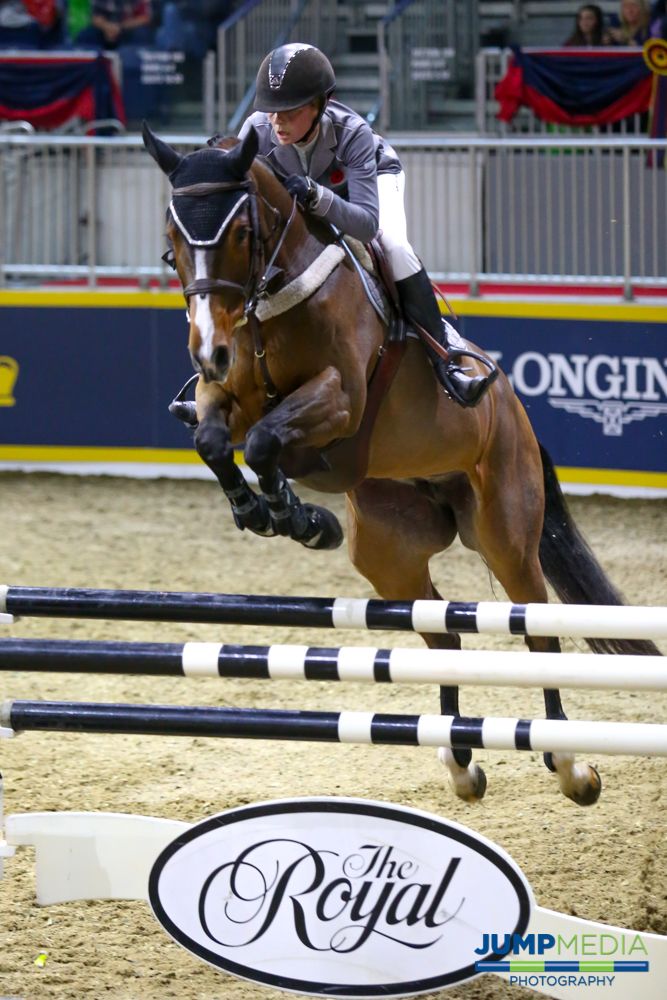 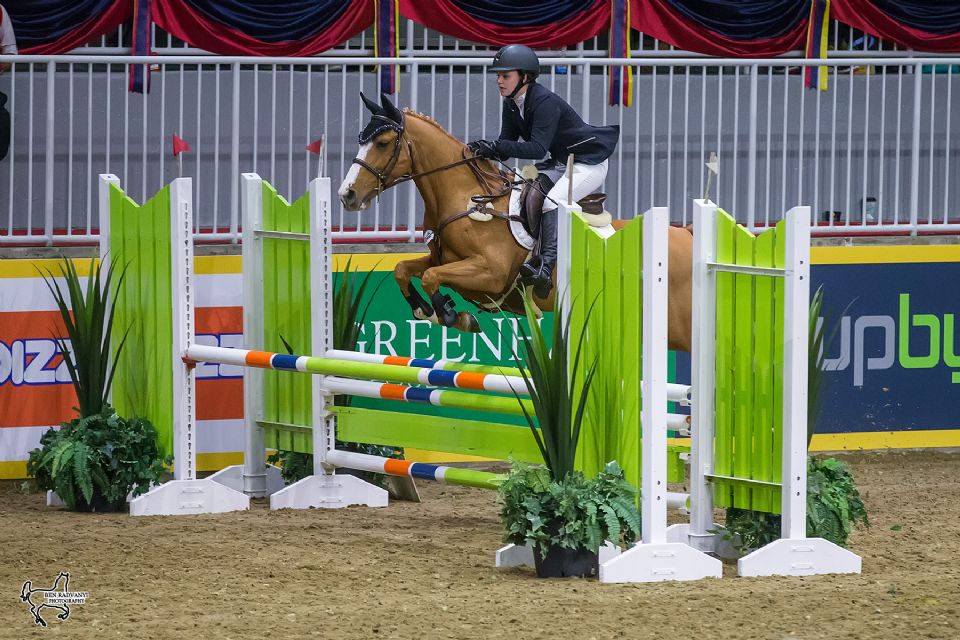 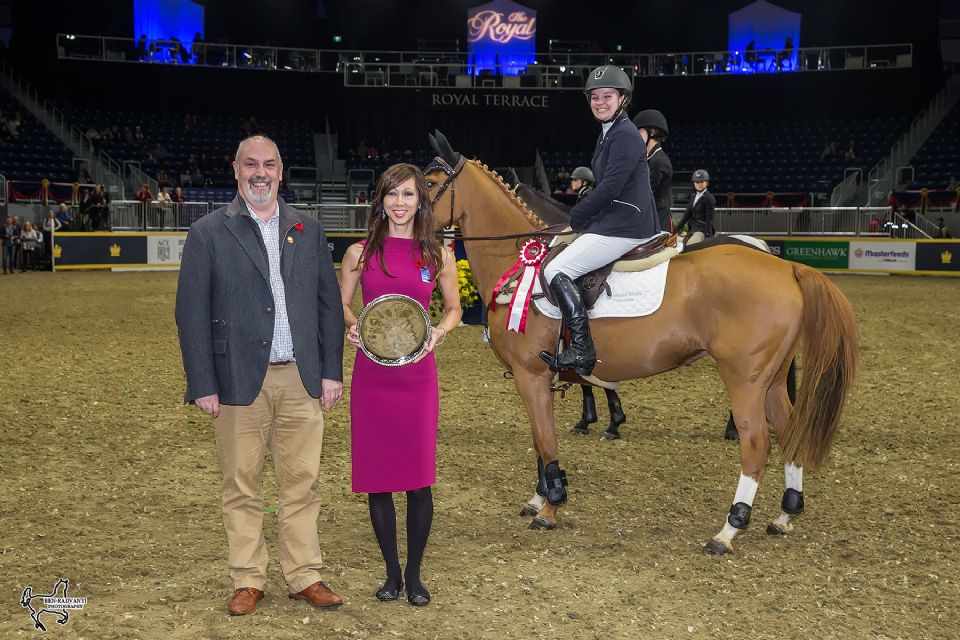 Laura Robertson and Bloomsbury are presented as winners of the $5,000 Royal Pony Jumper Final by sponsor William Tilford of Marbill Hill Farm, and Martine Stibrany of the Royal Agricultural Winter Fair.
Photo by Ben Radvanyi Photography

Veronica Bot of Burlington, ON, earned a victory in the $10,000 McKee-Pownall Equine Services Junior/Amateur Jumper Royal Stake on Sunday, November 6 at the Royal Horse Show, held as part of the 94th Royal Agricultural Winter Fair, which runs through November 13 in Toronto, ON.

Bot claimed the Canadian Equestrian Team Challenge Trophy for the win riding Quidam’s Caprice M, a grey Oldenburg mare owned by AEI Corp. Bot and her mount posted the only clear round in a five-horse jump-off to best an original order of 19 horses from five different Canadian provinces over tracks built by course designer Bernardo Cabral of Portugal.

“It really surprised me that we qualified, so I am really excited,” said Bot, 20, who trains with Chris Delia of Burlington, ON. “I had some issues with this horse at the start of the season, so the fact that we could put it together in the last class and win is the most exciting thing ever.”

Bot was the only rider to jump clear over the short course, and she posted the fastest time in 36.06 seconds. Carolyn Catton of Toronto, ON, finished second riding her own Scandalous after a four-fault jump-off round in 38.19 seconds. Jennifer Buchan of Toronto, ON, and her own Qrishna van de Smiss Z, also picked up four faults to finish third in 38.44 seconds, while Jeff Brandmaier of Guelph, ON, pulled two rails in 39.86 seconds to take fourth riding Caliana for Knightwood Stables. Christine Carlsen of North York, ON, rounded out the top five on Cardoso, owned by Valhalla Equestrian, with eight faults in 41.53 seconds.

Brandmaier’s top-five finish on Sunday helped him and Caliana secure the division championship after second and third-place ribbons earlier in the week, while Susan Horn of Bolton, ON, was named reserve champion after collecting first and fourth-place ribbons on Friday and Saturday.

Bot partnered with Quidam’s Caprice M less than a year ago, and the mount introduced her to a new kind of ride.

“She's a very sensitive, hot mare, and I wasn't used to riding that kind of horse,” said Bot, who also won the junior/amateur jumper final in 2014 with her own Calato's Charles. “It took me awhile to figure out how to ride her and how to use my body effectively on her. To finally figure it out has been such a rewarding experience, and it really showed today when we won the class.”

Bot splits her time between riding and studying medical physics at McMaster University in Hamilton, ON, but she makes competing at the Royal Horse Show a priority.

“It's a huge sentimental experience,” said Bot who hopes to move Quidam’s Caprice M up to the FEI division in 2017. “The first time that I came was two years ago, and to win this class both times is really exciting.”

Pony riders and their pint-sized partners also highlighted jumper action on Sunday with hometown girl Laura Robertson of Toronto, ON, racing to win the $5,000 Royal Pony Jumper Final riding Bloomsbury. The victory marked Robertson’s second win in a row in the Royal Pony Jumper Final, presented by William Tilford and Marion Cunningham of Marbill Hill Farm in Bradford, ON.

Robertson, 17, secured her repeat win with new mount Bloomsbury, an 11-year-old chestnut mare owned by Katie Bowering. Despite a partnership that only began earlier this year, the pair topped a two-horse jump-off duel. Although they had a rail down, Robertson and Bloomsbury stopped the clock in 28.02 seconds to ultimately win after Grace Munro of Wolfville, NS, and her own Ever So Clever picked up eight faults in 25.79 seconds. Coupled with her second-place finish, Munro won the other two classes in the division to be named champion in the pony jumper division, while Kilby Brunner Deforest of Hillsburgh, ON, and Beaverwood's Cinnamon, owned by Kirsten Brunner, claimed reserve.

Emily Burton of St. Thomas, ON, rode her own Montreux to third after a rail in the first round kept them from the jump-off. Ella Marquis of Caledon, ON, piloted Foxy Cleopatra, owned by Mark Marquis, to a four-fault round for fourth, and Kaitlin Davis of Georgetown, ON, took fifth aboard her own Bold Ambition, also with four faults.

“This is the second year I’ve done pony jumpers and my first full season on a completely new pony to the jumper scene,” said Robertson who leased Bloomsbury under the direction of trainer Domonique Maida of King City, ON. “She was a backyard pony, and her owner called my coach saying she had a pony she wanted to find someone for. We tried her and took her the same day.”

“She’s sassy and definitely has a personality, but she is the sweetest pony and is a lot of fun,” continued Robertson, 17.

As she moves on from the pony ranks, Robertson who is in grade 12 at Richview Collegiate Institute in Toronto, ON, already has her sights set on returning to The Royal Horse Show in 2017, saying, “I have come to The Royal every year since before I can remember, and I remember looking out at that ring, seeing all these amazing riders, and saying that one day I would be out there. To be here is a pretty incredible feeling and a great experience.”

Jumper competition returns to the Royal Horse Show when the international division kicks off on Tuesday, November 8, welcoming the best horses and riders in the world. The $130,500 Longines FEI World Cup™ Jumping Toronto on Wednesday evening, November 9, highlights international show jumping competition and is a qualifying event for the 2017 Longines FEI World Cup™ Jumping Final in Omaha, Nebraska, next spring.

Rio Olympic champions Nick Skelton and Big Star of Great Britain headline the list of international entries, which also includes Kent Farrington and McLain Ward, who were both members of the U.S. Olympic silver medal team in Rio, as well as 2016 Olympic bronze medalists for Canada, Tiffany Foster of North Vancouver, BC, and Amy Millar of Perth, ON.