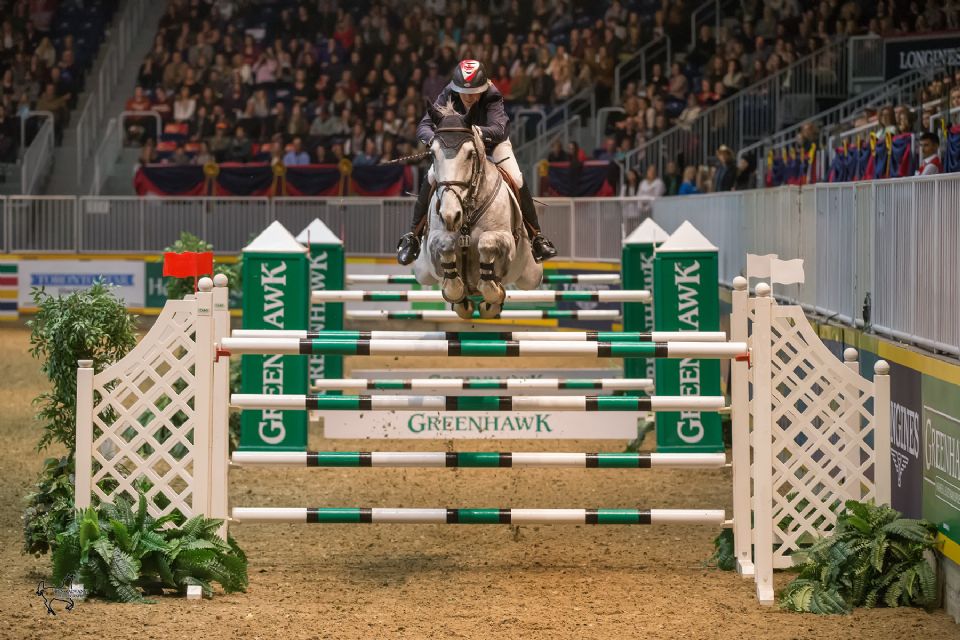 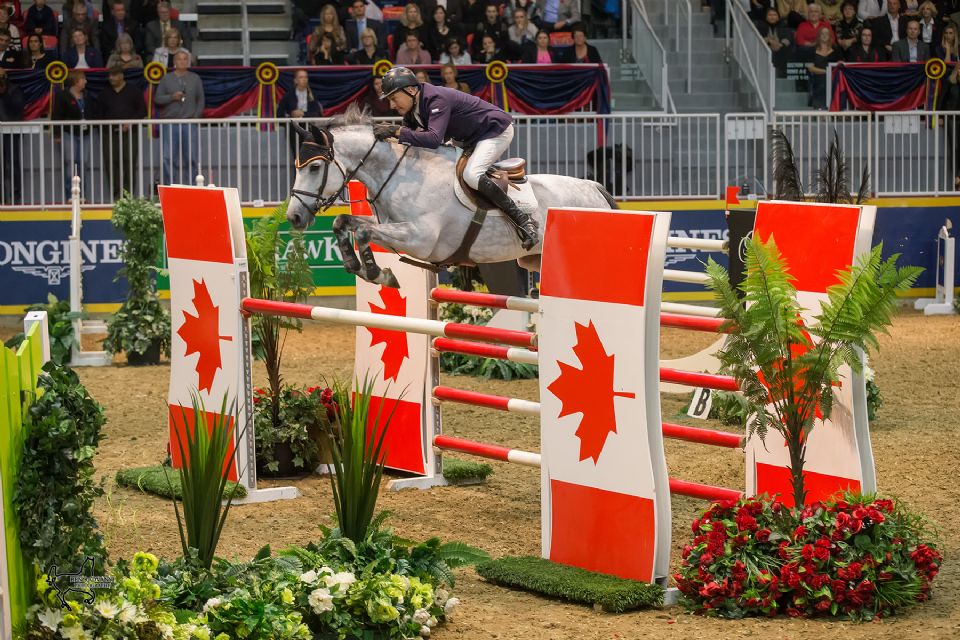 Jill Henselwood of Oxford Mills, ON, claimed the $100,000 Greenhawk Canadian Show Jumping Championship on Saturday night, November 7, at the Royal Horse Show®, held as part of the The Royal Agricultural Winter Fair in downtown Toronto, ON.

Riding Farfelu du Printemps, Henselwood entered the second and final phase of competition in the $100,000 Greenhawk Canadian Show Jumping Championship on Saturday evening with a perfect score of zero, having won Friday night’s opening round. The pair stayed consistent, jumping another clear round before facing off against the top six in a final jump-off. Despite having a rail down early on course, Henselwood held on the lead to win the 2015 Greenhawk Canadian Show Jumping Championship title.

“As soon as we started to jump and he could sense from me that it was serious he gave good efforts,” said Henselwood of the ten-year-old Belgian Warmblood gelding (Action Breaker x Darco) owned by John Madigan. “For this horse to get this title really means something in his resume, and starts to identify him as a top horse for Canada.”

Farfelu’s rail fell at the third fence in the final round, leaving on room for further error.

“I thought we were going to jump it, but made a mistake,” Henselwood said of her downed rail. “After that, I think Farfelu jumped everything else with a margin of another foot. I could feel the effort that he made; he didn’t want to make another mistake. He’s that kind of horse.”

Another Canadian Olympian, Lisa Carlsen, 50, of Okotoks, AB, produced strong performances to finish third with 5.66 penalties aboard Worlds Judgement for owners WJ Partners. Susan Horn of Bolton, ON, and Kingsland Farm’s Lillyfee placed fourth on 6.15 penalties, while Erynn Ballard of Tottenham, ON, and Bart C posted 6.93 penalties to placed fifth for owner Jaybird Farm. Keean White of Rockwood, ON, rounded out the top six aboard For Freedom Z, owned by Angelstone Partners, with 14.11 penalties.

Based on their results in the Canadian Championships, Henselwood and Cone secured the final two positions available in The Royal’s international show jumping division, which begins on Tuesday, November 10. They will join pre-qualified riders Carlsen, Ballard, Ian Millar of Perth, ON, Vanessa Mannix of Calgary, AB, Jonathon Millar of Perth, ON, and Chris Sorensen of Caledon East, ON, in representing the Canadian flag.

“She will try every time,” said Lapierre, 36, who has been riding Cescha M for the past three years. “Even when I make a mistake, she’s there, and if she makes a mistake, she knows I’ll be there. We’re a good team.”

Lapierre set a goal to pilot Cescha M in the National Talent Squad Championships following a successful summer, explaining, “She’s a young horse, and they need mileage in the ring before doing the big classes. This is a good class for young riders, and also for riders like me trying to produce young horses.”

“I won this 15 years ago with Diaka de Semilly and I knew talent ran in the family,” she said. “Both horses have what it takes to win, and that’s all because of their breeding.”

Another Quebec athlete, Billie Derouet of Bromont, took home the Reserve Championship in the Jump Canada National Talent Squad Championships aboard her own Bonaparte VP Wisebecq. Derouet placed second to Lapierre in Friday’s opening round of competition before taking third place in Round Two on Saturday.