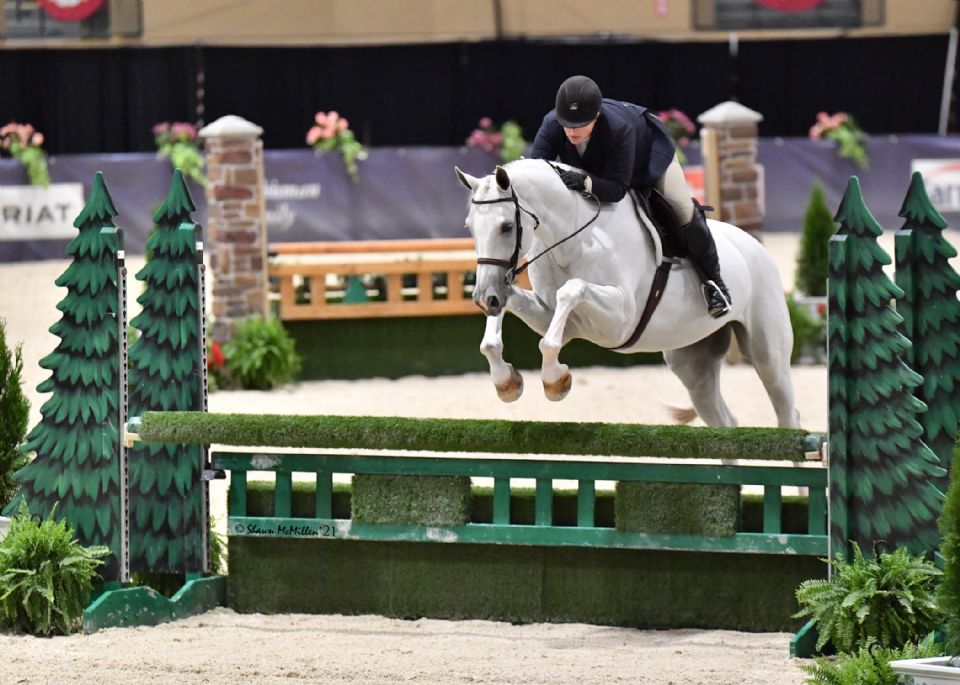 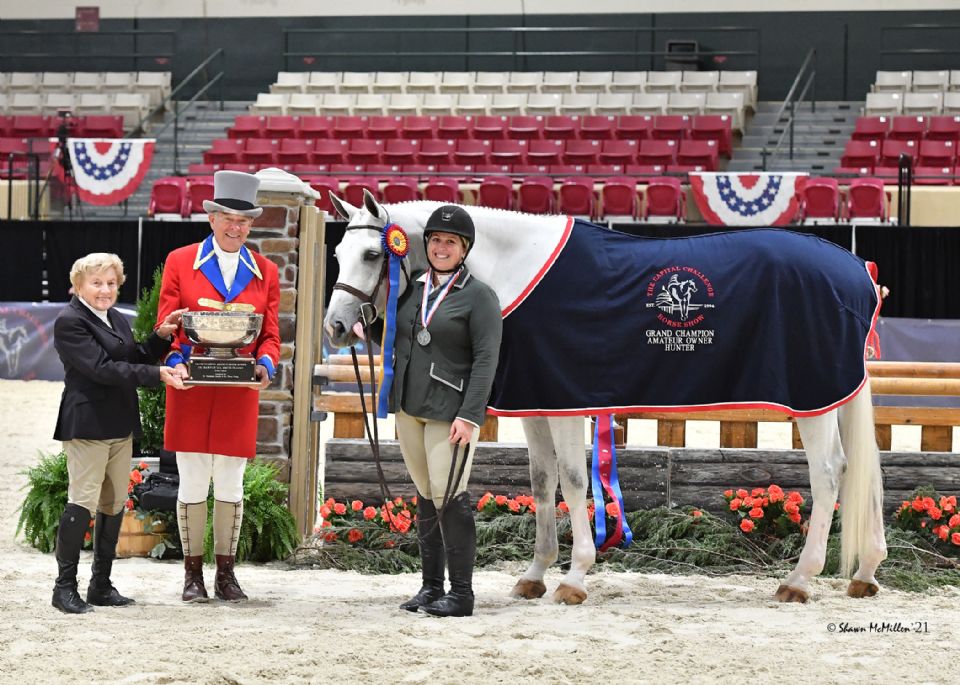 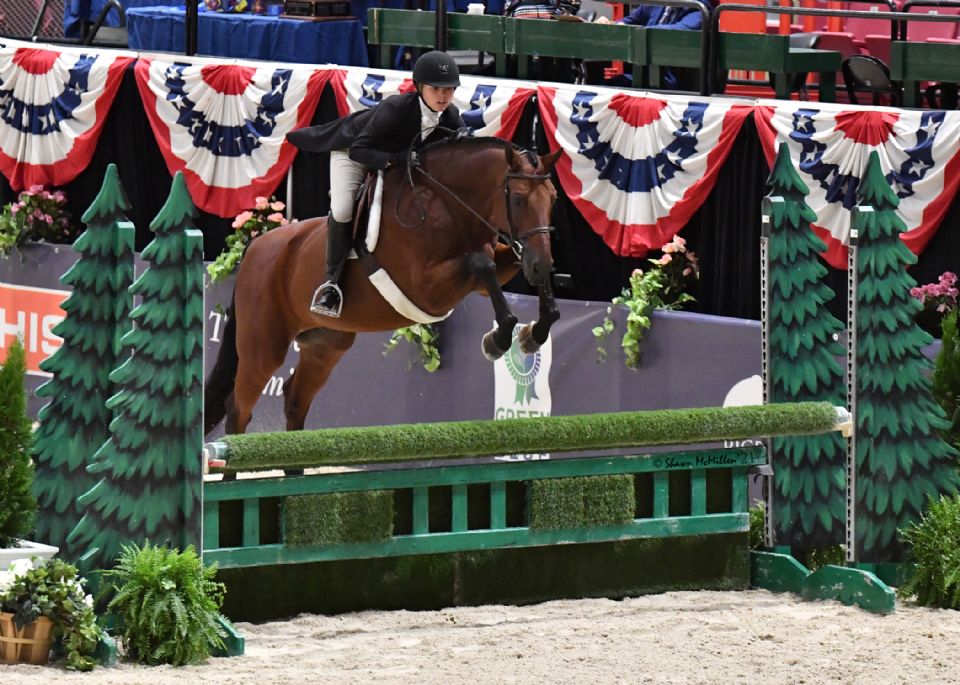 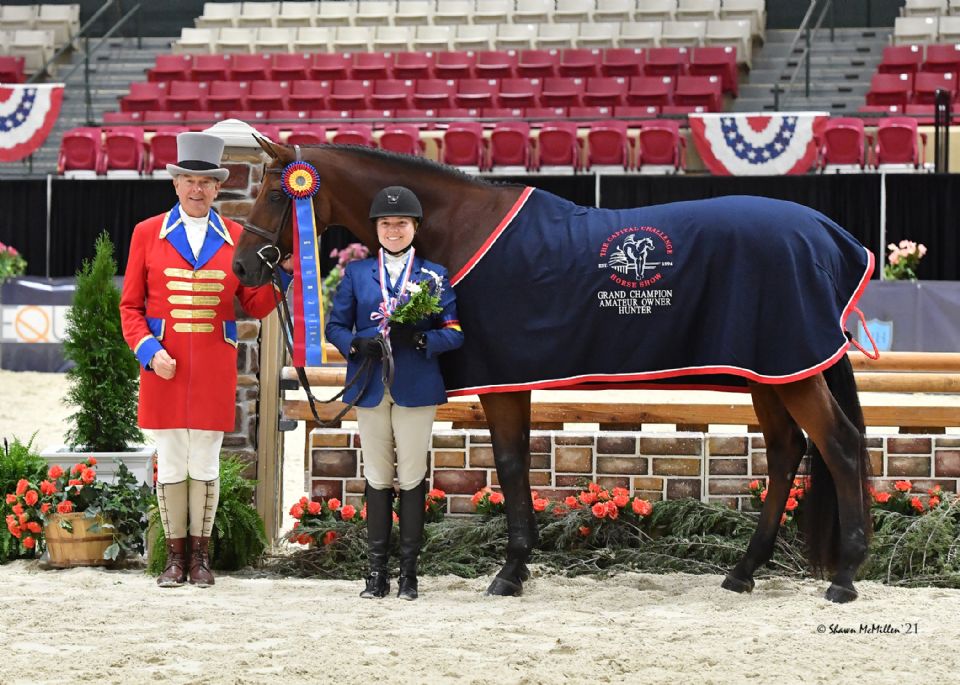 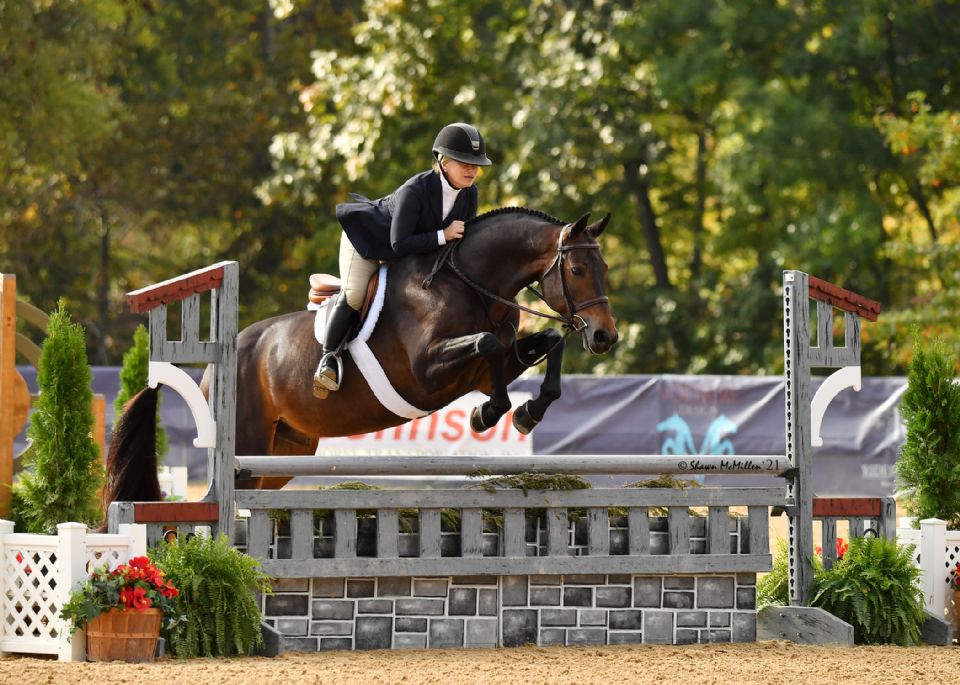 Per Se and Laura Karet.
Photo by Shawn McMillen Photography 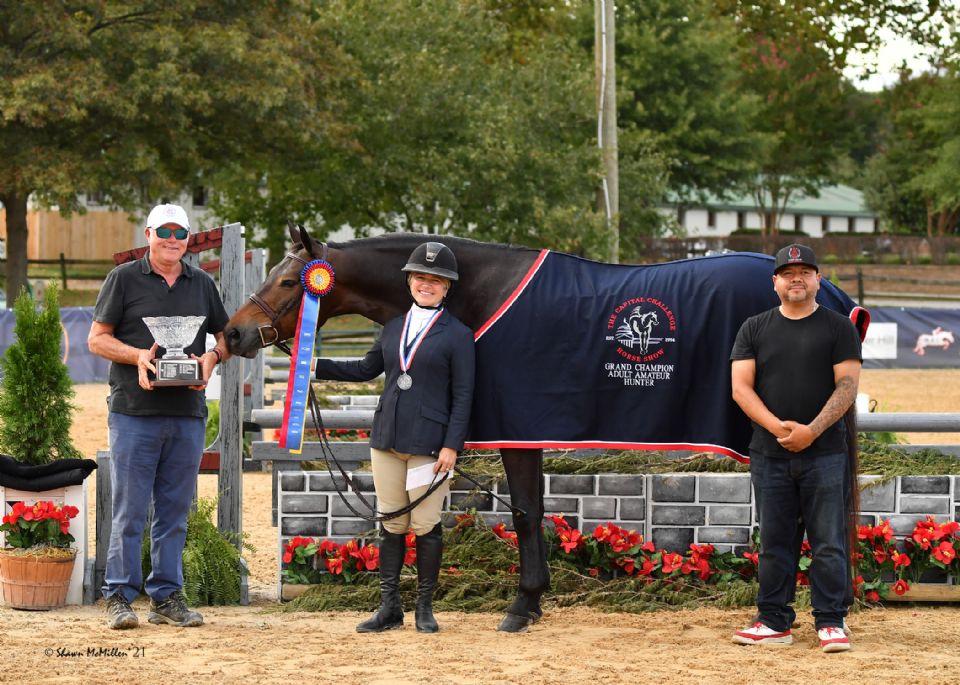 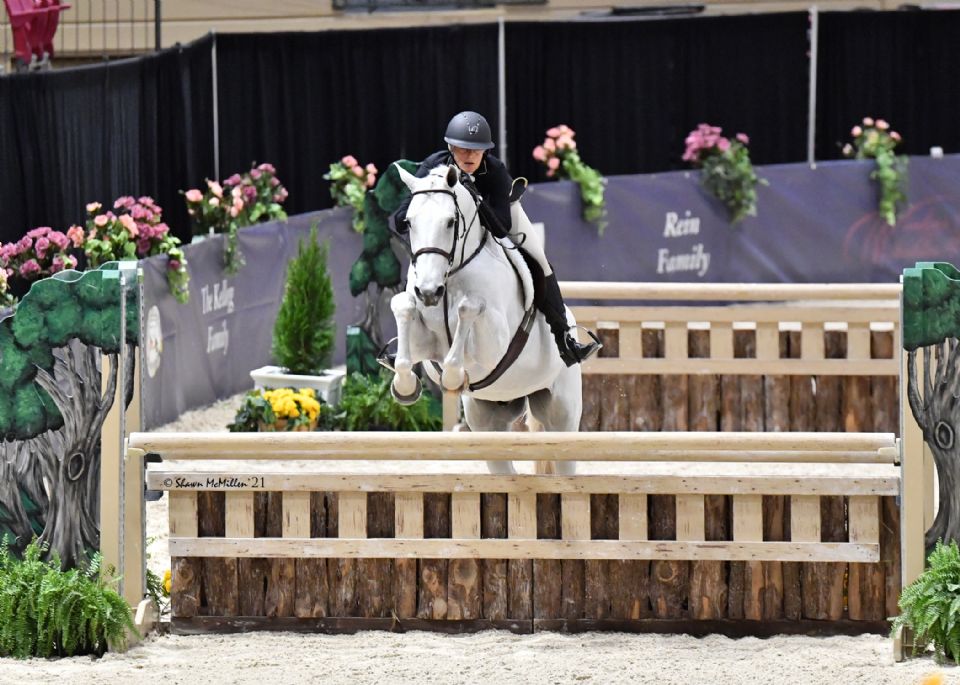 The champion in the Amateur-Owner 3’6” 36 & Over division, presented by Mr. and Mrs. Ernest M. Oare was Galactic, ridden and owned by Tonya Johnston.
Photo by Shawn McMillen Photography 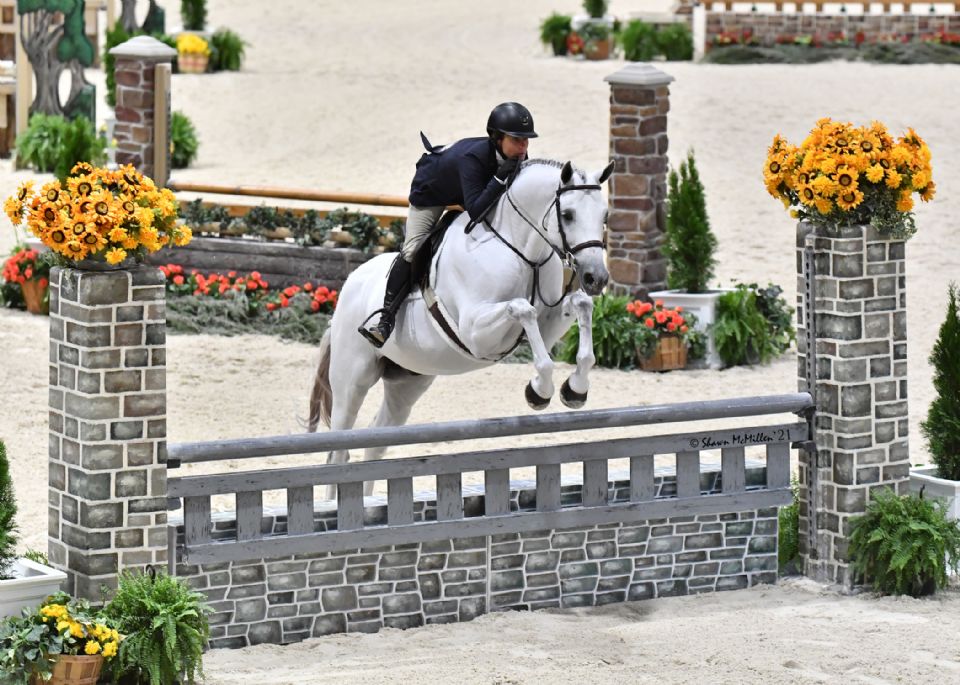 The Amateur-Owner Hunter 3’3 36 & Over champions were Lee Kellogg Sadrian and Blink.
Photo by Shawn McMillen Photography 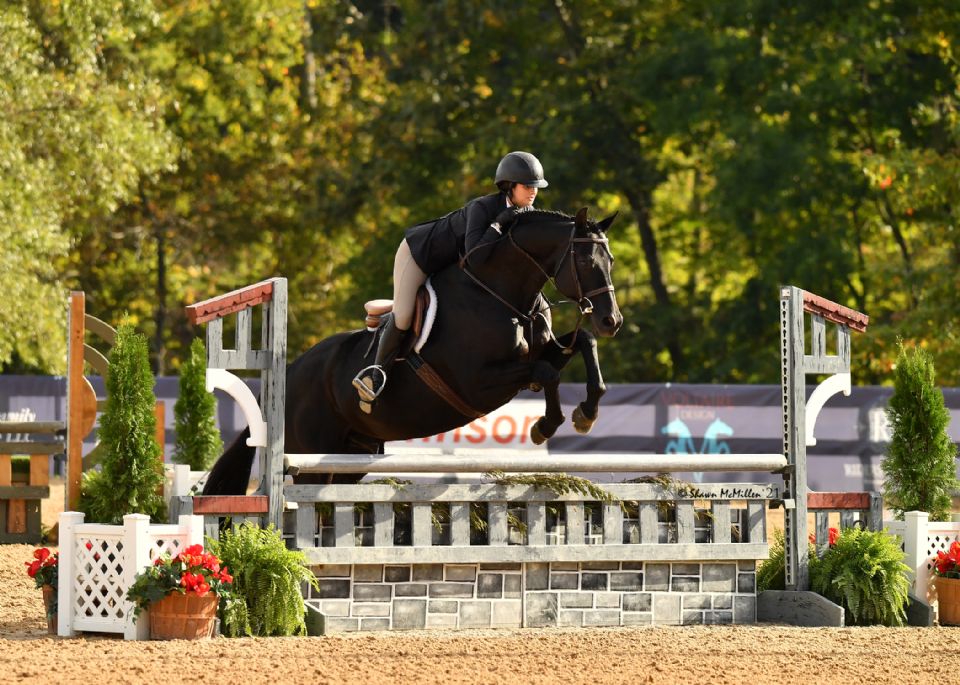 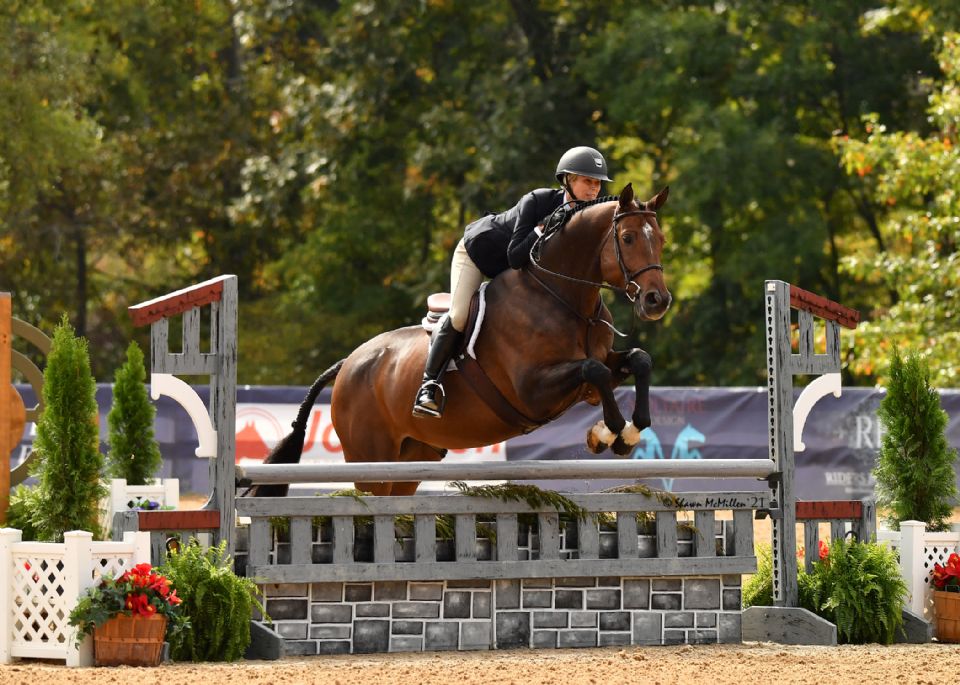 Laurie Barna and her own Cinestar won the championship in the Adult Amateur 36-49 division.
Photo by Shawn McMillen Photography

It was another full day of competition at the 2021 Capital Challenge Horse Show on Thursday, October 7, at Prince George’s Equestrian Center in Upper Marlboro, Maryland. Three Grand Champions were crowned as well, with Callie Seaman and Silver Lining winning the Amateur-Owner 3’6” honor, Martha Ingram and Airport 48 taking the Amateur-Owner 3'3" title, and Laura Karet with Per Se capturing the Adult Amateur victory.

With three firsts and a third place in the Amateur-Owner Hunter 3’6” 18-35 division, presented by The Hallman Family & MerryLegs South LLC, Callie Seaman of New York, NY, and her own Silver Lining easily won the division championship and also took home the Grand Amateur-Owner Hunter 3’6” Champion honor, presented by Finally Farm. They were presented with the Dr. Harold M.S. Smith Trophy, donated by Dr. Suzanne Smith & Dr. Peter Craig. Kaitlin Porath and her own Breaux were reserve champions in the division.

Seaman has had Silver Lining for three years. She renamed him after purchasing him because he turned out to be the silver lining in a bad situation. Seaman had severely broken her leg, and the talented grey horse was her motivation to heal and be stronger. The pair showed in the 3’3” division in 2020 and made the move up in 2021.

The seven-year-old Westphalian gelding by Los Angeles is “going on 30,” said Seaman. “You rarely ever see any greenness in him. He really loves his job and does it. He is reliable and always going to do his job.”

This is Seaman’s first grand championship at Capital Challenge, and she was proud to have accomplished that feat on a young horse that is newer to her.

“I think everyone sees Capital Challenge as the hunter spotlight show,” she remarked. “It’s the most exciting horse show for me for the hunters every year. It really is like the culmination of the hard work that you have done. To win here is really exciting and shows that you have come a long way and you’re doing something right. Winning here is always really, really special.”

In addition to her division and grand champion titles, Seaman was named the Best Amateur-Owner 3’6” Rider, presented by Mr. and Mrs. Ernest M. Oare, and awarded the So Many Ways Challenge Trophy, donated by Karen Kramer.

The champion in the Amateur-Owner 3’6” 36 & Over division, presented by Mr. and Mrs. Ernest M. Oare was Galactic, ridden and owned by Tonya Johnston. Dorli Burke and her own Charming were reserve champions. Johnston and Galactic also earned the EMO Amateur Owner 3’6” Trip of the Show with their high score of 87.

Taking the Grand Amateur-Owner 3’3” Champion title, presented by Missy Luczak-Smith was Martha Ingram of Nashville, TN, on Airport 48. They placed first, second, third, and third in the 18-35 division for the championship, while Catherine Cowie and her own Traveller, also winners of the $2,500 WCHR Amateur-Owner 3’3” Challenge, presented by Milestone LLC/Havens Schatt, were reserve champions.

The veteran Airport 48, an 18-year-old Holsteiner gelding, has been with the Ingram family for more than six years, but she only started riding him in 2018, when they competed in and won the North American Adult Equitation Championships.

“He is a really, really special horse for not just me but for my family,” said Ingram. “My dad showed him in the amateur hunters very well and did the derbies when he was a little bit younger. He’s just a superstar. To be able to now do him in the hunters is amazing.”

Ingram said that his looks and his attitude contribute to a winning combination. “He is beautiful, and he has the will to win,” she said. “He is always wanting to please, and he is so pretty going around the ring. He has a great stride on him, a great jump, and a great expression. He is so versatile.”

Ingram isn’t new to the Grand Champion winner’s circle, having captured the same title in 2019 with Fonteyn. “This horse show is so special in the way they do everything, so it’s always fun to be champion here,” she said.

The Amateur-Owner Hunter 3’3” 36 & Over champions were Lee Kellogg Sadrian and Blink, while Margot Peroni and Jordan ended up as reserve champions. Sadrian and Blink also collected the EMO Amateur Owner 3’3” Trip of the Show award with their high score of 90. Ellen Toon and Gabriel won the $5,000 WCHR Amateur-Owner 3’6” Challenge, presented by Robinson Ridge.

Karet Keeps It In Context With Grand Win on Per Se

Laura Karet of Pittsburgh, PA, rode Per Se, a seven-year-old Brandenburg gelding (Sandro’s Adel) owned by Glade Run Farm LLC, to the championship in the Adult Amateur Hunter 50 & Over division, presented by Ocean Echo and their ribbons of first in the stake class, second in the under saddle, and third in the over fences class earned them the Grand Adult Amateur Hunter Champion victory, presented by Steve Martines. The reserve champion in the 50 & Over division was Hollywood Park, ridden and owned by Lynn Walsh. Karet and Per Se shared the EMO Adult Hunter Trip of the Show with Meghan Rohrbaugh Bear on Waverly, as both received a score of 90.

This is Karet’s first time winning a grand hunter championship, and it is also their first year showing together at Capital Challenge.

“He’s come a long way this year,” said Karet. “This is a really nice way to cap off the year. I was so proud of him this weekend because he was so brave and straightforward. This was his first time doing anything like this. He got into this rhythm, went off, and did his thing!”

Karet was excited to return to Capital Challenge in Maryland after taking a year off. “We come here every year and we really missed it last year. It feels so good to be back. I love seeing all my friends here from all across the country. My daughter Alexa also rides so it’s a really special place to be able to show with her. It’s a really wonderful show, they really do it right.”

The championship in the 18-35 division, presented by Lainie Wimberley & Brigadoon Show Stables, Inc. went to Lindsey Tomeu and Nightfall, owned by Popish Farms LLC, while Ashley DeWoolfson and her own Cinderella were the reserve champion. Laurie Barna and her own Cinestar won the championship in the 36-49 division. The reserve champion was Waverly, ridden by Meghan Rohrbaugh Bear and owned by R&R Hunter Horses LLC.

Competition continues on Friday, October 8, with the start of the junior and pony hunters, the WCHR Adult Amateur Challenge, the Ariat National Adult Medal Finals, and the WCHR Pro Finals, presented by the Rein Family.