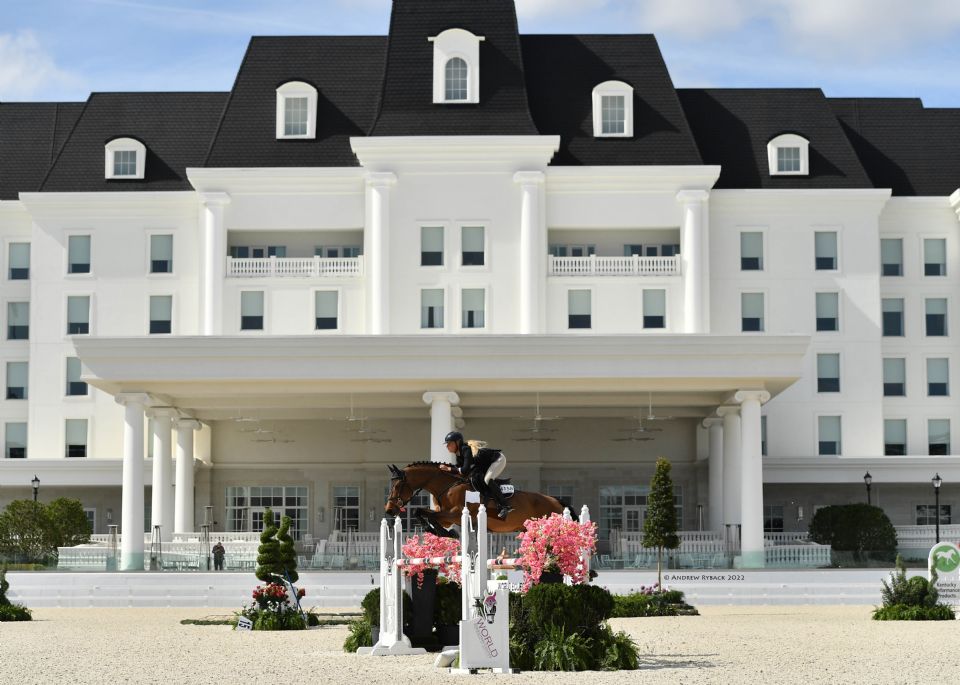 National and international show jumping classes will be held in the Grand Arena at WEC – Ocala.
Photo by Andrew Ryback Photography

Top course designers lay the tracks for the 2022 USEF Summer Series at World Equestrian Center – Ocala, which features nine weeks of US Equestrian Premier Hunter/Level 6 Jumper competition. The nine-week series will take place from June 15-August 14 and will showcase two weeks of CSI3* international competition during Weeks III and IV on June 21-26 and June 28-July 3.

Andy Christiansen, a Fédération Equestre Internationale (FEI) Level 3 course designer, will set the opening tracks for the 2022 USEF Summer Series. Christiansen is an accomplished hunter designer who recently received his license as a FEI course designer. In that short time, Christiansen has received high praise for his tracks from many top riders.

Renowned FEI Level 4 course designer, Guilherme Jorge of Brazil, will design during the CSI3* Week III. Jorge is a gifted designer, having created tracks for some of the largest championships across the globe including the 2005 and 2007 FEI World Cup™ Finals, the 2007 Pan American Games in Brazil, numerous CSI5* events at Spruce Meadows in Calgary, Canada and the Winter Equestrian Festival in Wellington, Florida, and the much-praised tracks at the Olympic Games in Rio de Janeiro, Brazil, in 2016.

The CSI3* course designer for Week IV, Alan Wade of Ireland, will build the international competition tracks. Wade is an accomplished designer that is respected by riders. He has built for some of the most prestigious championships and competitions such as the 2017 FEI Jumping World Cup™ Final in Omaha, Nebraska; the 2018 FEI World Equestrian Games™ (WEG) in Tryon, North Carolina; and the Palm Beach Masters CSI4*-W featuring the Longines FEI Jumping World Cup™ in Wellington, Florida, as well as the Longines FEI Jumping Nations Cup™ in Wellington, Florida.

Joey Rycroft of Canada will set the tracks during Week VI of the 2022 USEF Summer Series. Rycroft, an FEI Level 3 designer, is an emerging talent having assisted at the FEI World Equestrian Games™ and Winter Equestrian Festival and was a designer at the 2022 WEC – Ocala winter circuit.

Peter Grant, an internationally-recognized FEI Level 3 course designer, will build the courses for Week VII. Grant is well-known for being a part of the build team at Spruce Meadows in Calgary, Canada, since 2004, where he has designed at many CSI5* tournaments. In 2021, Grant assisted in the design at the Olympic Games in Tokyo, Japan.

Ana Catalina “Catsy” Cruz of Mexico, a North America favorite, will return to World Equestrian Center – Ocala to create tracks during Week VIII. Cruz is an accomplished FEI Level 3 designer that has made numerous appearances at top venues on the continent.

Doug Russell will take over the course building duties during Week IX of the 2022 USEF Summer Series. Russell, a top national show jumper and trainer himself, has a lengthy list of course designing accomplishments across the country. He designed at Saratoga in New York for nine years and has built courses at some of the most historic horse shows in the U.S., including the Devon Horse Show in Devon, Pennsylvania. Russell has been a USEF-licensed course designer since 1991 and recently received his FEI course designer license.

The 2022 USEF Summer Series wraps up with courses by Manuel Esparza, an FEI Level 3 course designer. Esparza has assisted with the courses at five Olympic Games including Atlanta, Georgia, in 1996; Sydney, Australia, in 2000; Athens, Greece, in 2004; Beijing, China, in 2008; and Rio De Janeiro, Brazil, in 2016.