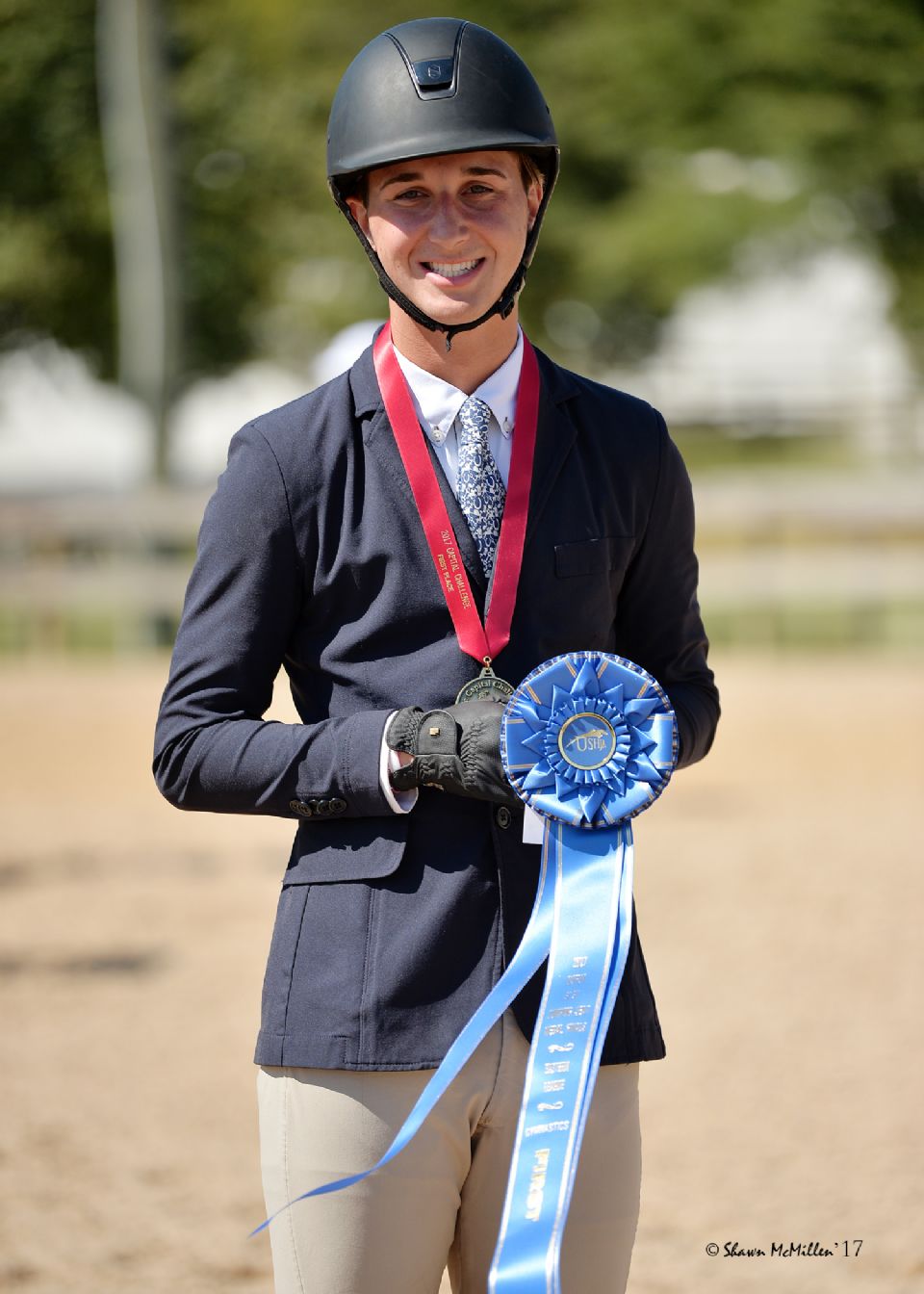 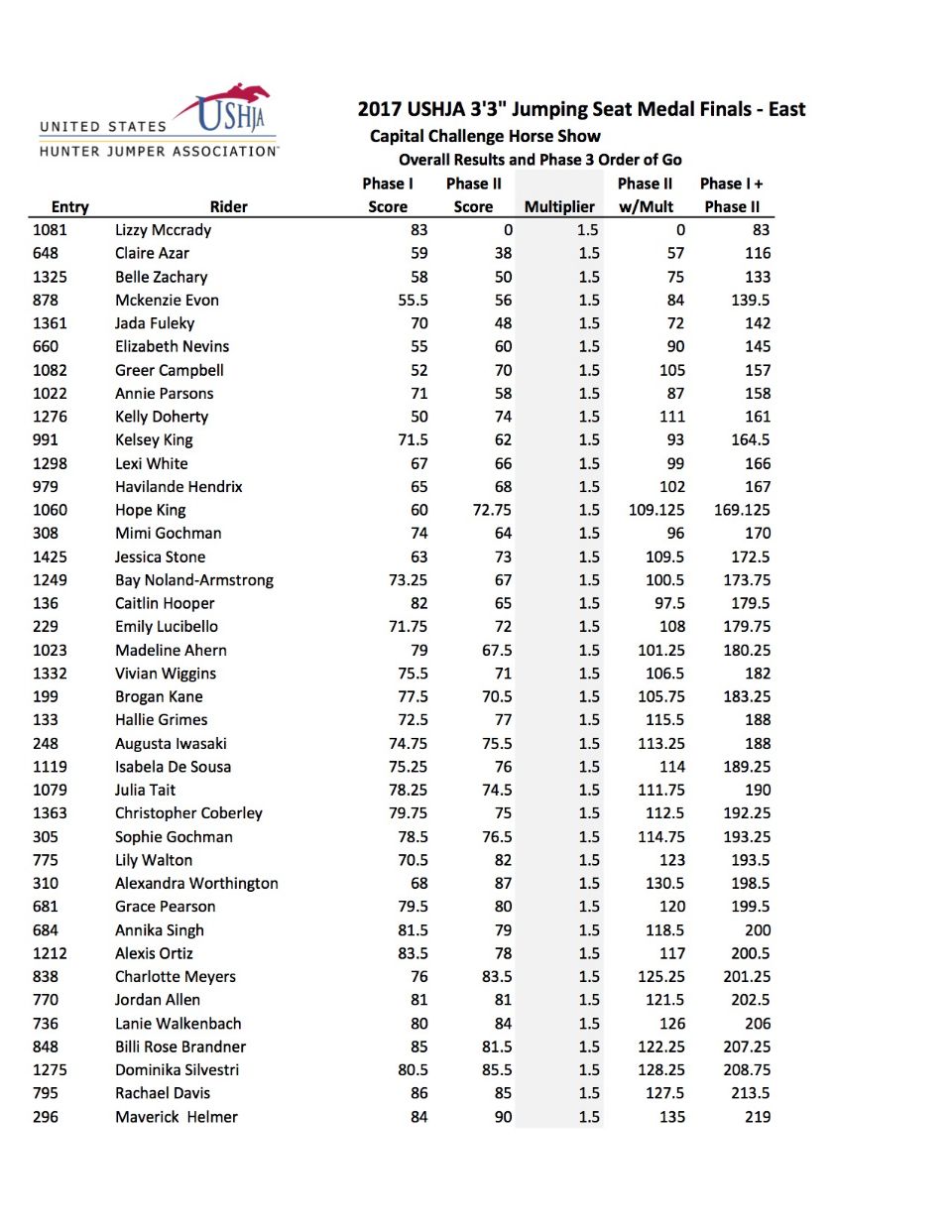 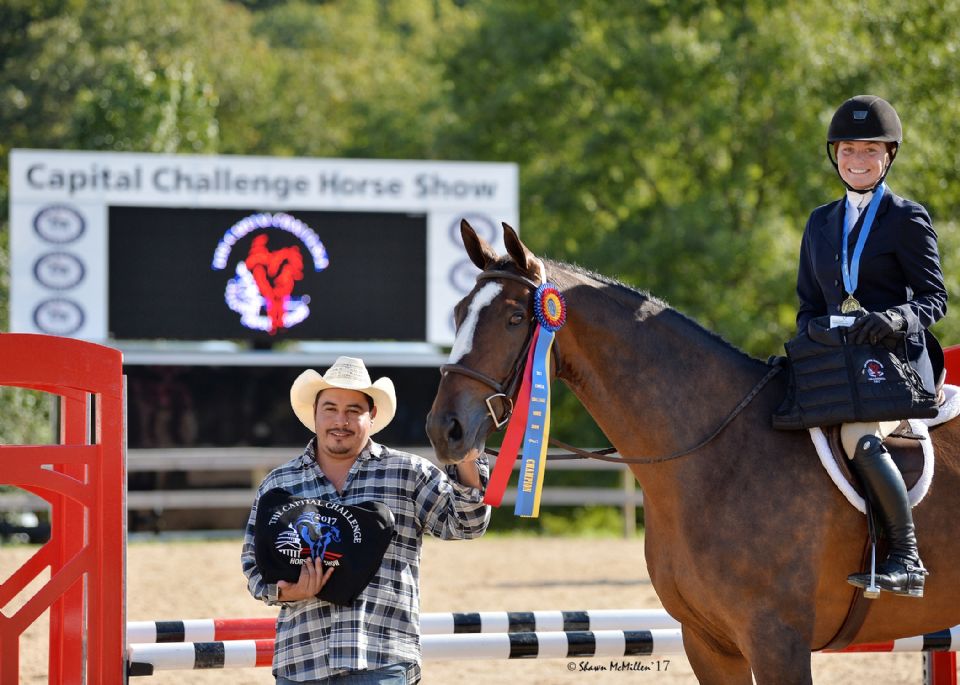 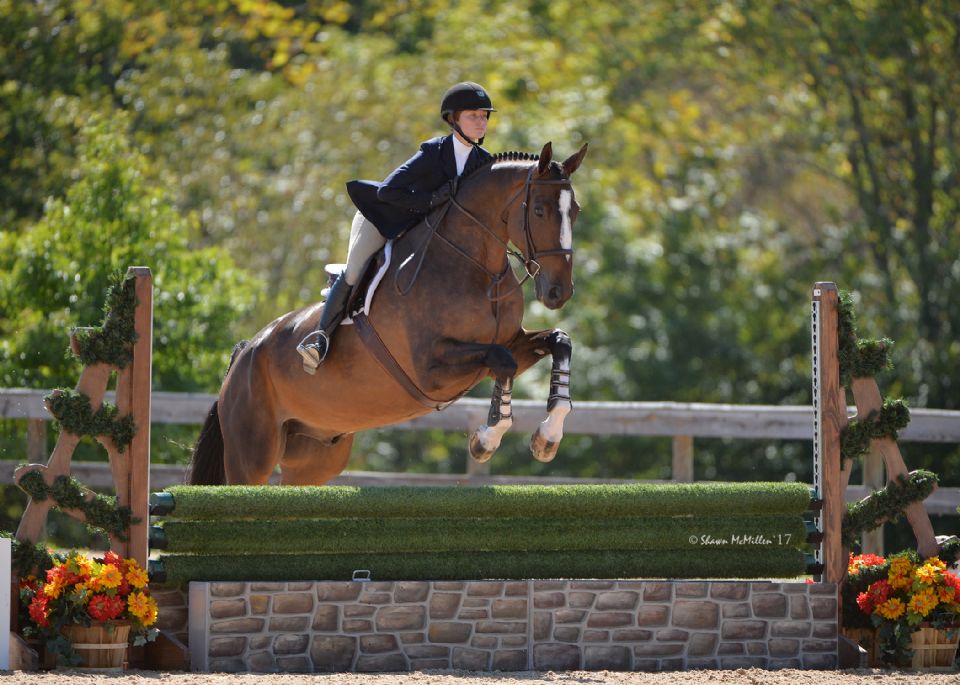 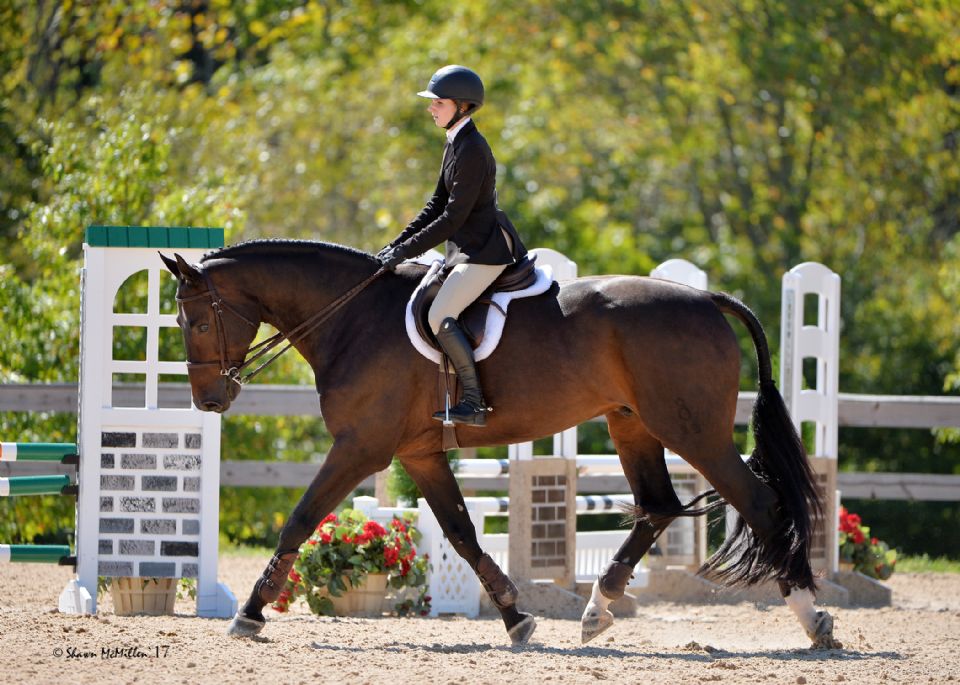 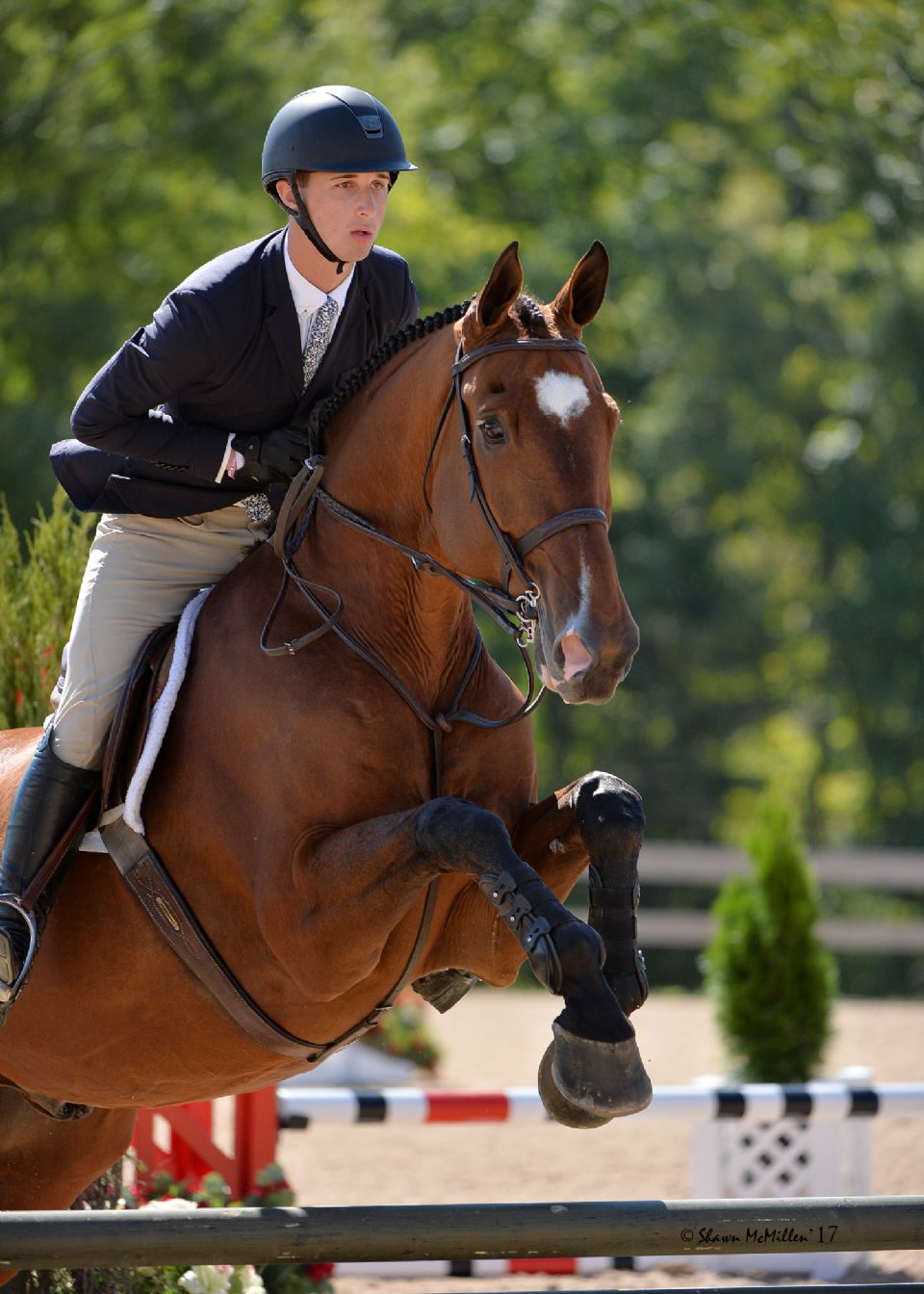 The 2017 Capital Challenge Horse Show kicked off on Friday, September 29, at the Prince George’s Equestrian Center in Upper Marlboro, MD, with the start of Equitation Weekend, presented by Bigeq.com.

After placing third in the Flat Phase of the USHJA 3’3” Jumper Seat Medal Final – East, Maverick Helmer moved up to capture the blue ribbon in the Gymnastics Phase over Alexandra Worthington and Dominika Silvestri.

"He's a horse that we bought in early December, and we've had him all year,” said Helmer of Canterbury. “This is our finals debut. We were third coming in (after the flat) and kind of improved our score with the gymnastics.

“I really enjoyed the flow of the course,” Helmer added. “I thought it was really comfortable to just ride. Of course, it's set at the 3'3" height, so it's not too intimidating. I thought the bending lines to the one-stride to the bending lines in both directions were really interesting. You had to kind of use different techniques for each line to accomplish what you wanted. The bounces were really nicely placed, so those were my favorite things throughout the course.”

Although Helmer has shown at Capital Challenge on three prior occasions, those shows were “not this successful,” he joked.

His goal this fall is to do well and continue improving. “I hope to have a successful indoors season, as many of us do,” he said. “I qualified for Medal Finals and Maclay Finals, and I had ASPCA Regionals last week. I think just being happy with my rounds and overall just enjoying it is my plan."

Rachael Davis, 17, impressed the judges during the Flat Phase of the inaugural USHJA 3’3” Jumping Seat Medal Final–East. Her position and solid performances, particularly in the lengthening of stride and counter canter, resulted in a score of 86, one point ahead of second-placed Billi Rose Brandner and two points in front of Helmer, who was third.

Davis, of Seattle, Washington, is a freshman at Baylor University in Texas, and she took a short break from her studies and competing on Baylor’s National Collegiate Equestrian team to show at Capital Challenge during Equitation Weekend.

“I figured since it was the first time they were holding the class, I wanted to do it,” said Davis, who is also competing in the age group equitation and the Palm Beach International Academy North American Equitation Championships. “I’m riding on the Baylor team, so my coach said it would be great if I went in and competed again, and this win was great for Baylor.”

Davis is partnered with Acido 7, a horse she is leasing for the fall season from Elizabeth Bailey. “This is my third or fourth show on him, and he’s really nice,” said Davis, who stands second to Helmer going into tomorrow’s Jumping Phase.

Davis enjoyed the format of today’s Flat Phase. “It went really well. I did the USEF Show Jumping Talent Search Finals last year, so this wasn’t quite as hard. I think it’s great for people that are moving up and haven’t quite started riding at that level because they do a lot of the sitting trot and lengthening and shortening strides, which is everything they do at Talent Search.”

Davis and all of the riders contesting the USHJA 3’3” Jumping Seat Medal Final will return for the third and final phase, the Jumping Phase, Saturday evening beginning at 7 p.m.

Foster, 21, earned the division championship aboard Carlsberg, an eight-year-old Warmblood gelding that Foster purchased at the beginning of the year with the intent of competing him in the jumpers.

“I did him in both the High and Low Junior/Amateur Jumpers in Pensacola, Florida. He was amazing at it, but we were always a little slow,” said Foster, who trains with her mother, Patty Foster, out of Rolling Acres Farm. “All of us thought that he would make a great equitation horse, so he has been my project all year.”

Growing up less than an hour away from the Prince George’s Equestrian Center, Foster has been attending the Capital Challenge Horse Show from a very young age, first competing at the show in the leadline division.

“I’ve been coming here since I was born, and I’ve always loved coming here,” said Foster, who currently attends and competes on the equestrian team for Auburn University in Auburn, Alabama. “The past couple years, I’ve been at school so I haven’t been able to, so I’m really glad to be back. I thought Concerto was great today. This is his first big finals; he hasn’t really been at a big horse show yet, so I thought he was a great guy to just walk in there and do as well as he did!”

Foster and Concerto will return to the ring at Capital Challenge on Friday, October 6, to contest the Ariat National Adult Medal Finals.

Competition at the Capital Challenge Horse Show continues on Saturday beginning at 7:30 a.m. with the age group equitation divisions and culminating for the day with the USHJA 3’3” Jumping Seat Medal Final beginning at 7 p.m. in the Show Place Arena.