If you have a chance, pay a visit to the corner of G and 6th Streets during the Washington International Horse Show (WIHS). There you’ll find Sandy Johnson, the official farrier of WIHS since 2010. Johnson is one of those many unsung heroes who work hard to make sure the show goes flawlessly without ever being in the spotlight.

Johnson makes WIHS a yearly stop on her busy calendar mainly because of the unique setting of the show. “I think that's what makes it so special,” she said. “There are no other shows like this, where you’re downtown in a city with the public walking by every day looking in amazement. They just cannot believe that there are horses downtown in middle of the city competing. That's what makes it so fun; it's a unique horse show and there are a unique set of challenges.”

The majority of Johnson’s business during the week of WIHS is removing shoes from horses and ponies for the under-saddle classes, then nailing them back on once their under-saddle class is over. She’s also available for tacking lost shoes back on or performing a complete shoeing on horses that need it. Friday and Saturday of the show are her busiest days. Johnson’s set-up on the sidewalk gets some attention from city dwellers passing by. “We do get a fair amount of traffic,” she said. “At night, the trailer is lit up like a Christmas tree, so we get a lot of people watching and taking photos.” 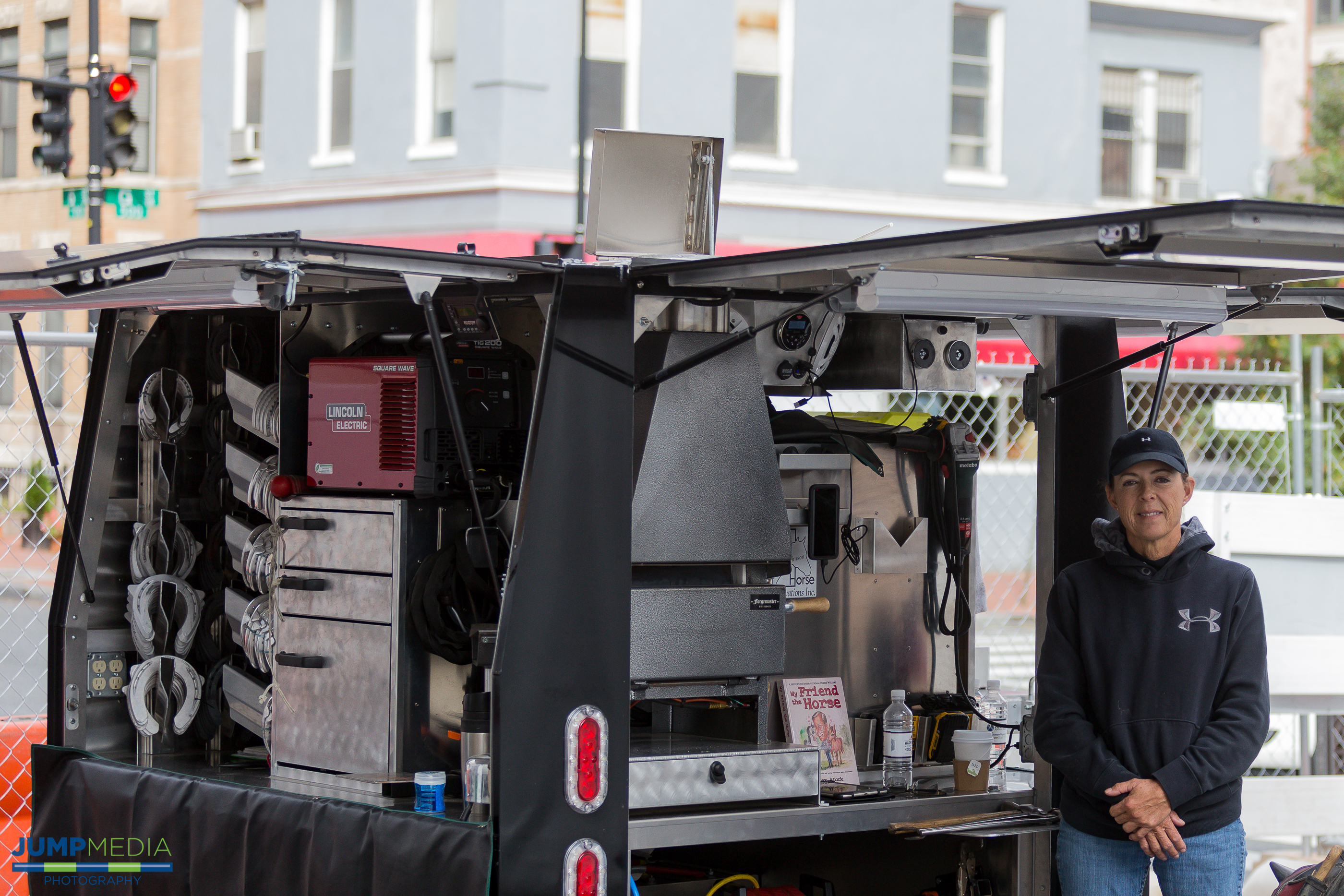 Farrier Sandy Johnson set up outside of the Capital One Arena. Photo by Jump Media

Johnson is one of the few female farriers in a business traditionally dominated by men. “I go to a lot of shows and I have very good clients, but I'll still get every now and then, 'Oh, I didn't know women did this.' At the very beginning when I started out, I think there was some resentment in the older male farriers; they didn't like that there was a woman on the circuit,” she said. “But as time went on and people realized I would be sticking around, it got easier. Now, I feel that I'm very much accepted as part of the East Coast farrier circuit.

Johnson uses her background as a rider and groom to help make a connection with the horses she works on. “I think it's very important to be a horseperson first and a farrier second,” she said. “I always make friends with the horses before I start working on them; I think that's so important. Even here, as busy as we get with the under-saddle, I'll always pet them first and say 'Hi.' And they'll be so much easier to work on.”

Johnson was born and raised in Ireland to a family immersed in horses. Her aunt, Mary McCann, bred the famous jumper stallion Cruising and her father, Alex Atock, is a former head of the FEI veterinary committee. Her brother, Martin Atock, is the managing director of Peden Bloodstock equine transportation. Johnson grew up riding, but in 1984 she met trainer George Morris, who hired her to return with him to the United States and work for him at his Hunterdon show stable.

Johnson worked at Hunterdon for a year and a half, during which time she met the farrier Joe Johnson and they married. Sandy moved from grooming to braiding for a time, then started working with Joe in the shoeing business. “I started the usual way—sweeping the floor and doing paperwork. And then I started to help out with things on the truck—learning how to use the drill press and the grinders,” Sandy said. “I learned how to weld and how to mount pads and how to fix quarter cracks. I didn't actually start shoeing horses until Joe had a hernia surgery about 15 years ago. When he couldn't work, I just slipped right into the role and took over. I had no problems. I had watched for so long, I knew what to do.”

Sandy and Joe worked together for 30 years, but last year Sandy struck out on her own after their divorce. She’s based in Wellington, FL, for the winter season and keeps an apartment in Batavia, Ohio, for during the summer months. She flies back and forth between the two locations and keeps a shoeing rig in both places. “Most of my Florida clients will spend the summers in Lexington, KY,” she said. “Then I also have a core group of clients in the Cincinnati and Columbus, Ohio areas. In the summer I travel to Kentucky, Lake Placid [NY], Traverse City, [MI] and then Wellington in the winter.”

This summer, she added a stop to her list—she was one of the official show jumping farriers at the FEI World Equestrian Games in Tryon, NC. “We got to work at the in-gate for the whole week,” she said. “I know a lot of the international riders because I've also assisted my brother with transport for Global Champions Tour events in Miami and Mexico City, helping load and unload the horses, and also with previous experience at World Cup Finals. It was a really fun experience. It was some of the most phenomenal competition I've ever witnessed. The atmosphere at the in-gate was absolutely electric.”

Farriers keep long hours and the demanding work takes a toll on their bodies, but Sandy loves the job because it keeps her close to horses. She also supplements her farrier business by working in equine insurance, which she plans to have as her next career when she eventually (and reluctantly) leaves shoeing behind. “I love horses. I don't think you can be a good farrier without having a love for horses, because it's very hard work,” she said.

“It's a challenge, keeping a horse going, keeping their feet in good shape when they're transitioning between hard footing and soft footing and doing a lot of showing or not a lot of showing,” Sandy continued. “Keeping strong, solid feet on some horses is a big challenge. Watching horses go in the ring year after year and win, there's a lot of satisfaction that goes with being part of that.”