The Man Behind the Voice

On Saturday night at the Washington International Horse Show (WIHS), take a close look when you hear a deep baritone voice begin the time-honored first verse of “The Star-Spangled Banner,” the national anthem of the United States. Standing in the spotlight center ring will be Retired Master Sergeant Caleb Green. He’s sung the national anthem at WIHS for a decade.

Green, from Woodbridge, VA, has no equine connection, though he enjoys watching the horses compete after he sings and sometimes brings some of his seven children to join him. “The only horsepower in our family is in our vehicles!” Green joked. “We absolutely watch the show—if we could afford it, my daughter would probably be an equestrian. She loves it. But sports are expensive. They play soccer and other sports.”

But he has strong ties to the Capital One Arena—he has sung the national anthem at Washington Capitals ice hockey games since 1999. He even has a Stanley Cup ring awarded to him by Caps owner Ted Leonsis after the Caps’ Stanley Cup victory in June. “I am a Capitals fan. I got it bad!” Green said. Most of the time when he sings before Caps games, he performs a duet with Sergeant Major Bob McDonald. “I think we're the only ones in the entire industry, whether it's the NBA or NHL or in baseball, where we do a duet. You'll see trios and quartets, choruses, all those. But we're the only duet I've seen,” Green said. 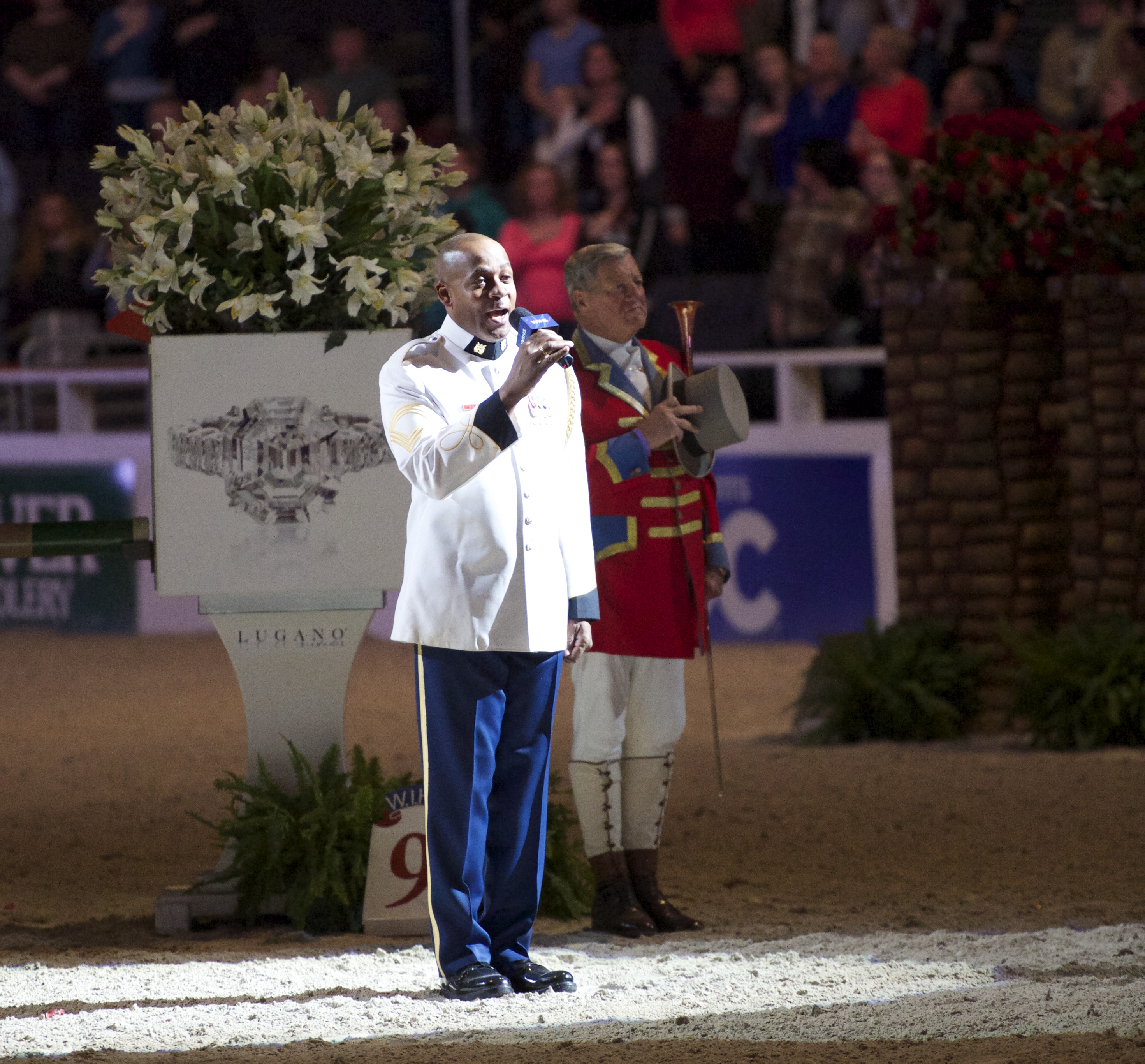 You might not realize it, but you’ve also probably heard Green perform before. He sang at President Barack Obama’s 2009 inauguration concert and he’s sung the anthem at Washington Redskins football games. In 2008, he performed “O Holy Night” for the TNT production of “Christmas in Washington 2008.” He’s also performed at The NAACP Image Awards and The Naval Air and Sea Show in Ft. Lauderdale.

Green, now retired, served in the U.S. Army for 30 years. He spent 14 years as a communications officer, then sang as a premier vocalist in the U.S. Army Band Downrange for 16 years and performed all over the world.

Green grew up singing in church and studied music education at Hampton University in Hampton, VA, then joined the Army. He retired from the Army in 2015 after his 30 years of service, but he is by no means idle. He still performs as a musician in the D.C. area, works as a marketing associate for LegalShield, and volunteers for many different groups. He’s passionate about serving others and has been the director of the Center for American Military Music Opportunities (CAMMO) since 2014.

CAMMO’s mission is to create music-based therapeutic programming and outlets for service members, veterans, and their families and to train them for music-based career opportunities. “I work with veterans who are on the recovery journey, whether it be PTSD or substance abuse or something else,” Green said. “We do whatever we can to use our talents to bring them to a place of healing and restoration.”

For Green, the national anthem isn’t just a tradition. “It’s also a moment in the arena that takes your focus off the entertainment and sport aspect of the show. Being able to see their athletes ride is a benefit of the freedoms that we have,” he said.