These Two Sisters Are Horsing Around at WIHS This Week

If you watch the “Guess Where We Are Going!!!” YouTube video posted by Sisters Horsing Around, you’ll see Sarah and Emily Harris literally squirming with excitement at the prospect of spectating at the Washington International Horse Show (WIHS).

The Harris sisters are avid equestrians, but they’ve never attended a show as large as WIHS. They’re from Altavista, VA, in the Lynchburg area of Central Virginia, and keep their five horses and a pony in their back yard. Sarah, 14, and Emily, 20, are members of both the Roanoke Valley and Bedford Hunt Pony Clubs. They had seen videos of WIHS online and dreamed of traveling to see their equestrian heroes compete. This week, they’re in Washington, D.C., living that dream.

It all started when their mother, Julie, drove Emily and Sarah to Aldie, VA in August to watch the WIHS Barn Night “Dressage for Jumping” Clinic, presented by BarnManager, with U.S. Olympic dressage medalist Laura Graves. Graves was at the top of both Sarah and Emily’s lists for riders they wanted to meet. “We'd seen her story, and we loved hearing about Verdades,” Emily said. “She had a hard time with him and we've had a hard time with our horses, so we could relate. We were so excited and thrilled to be able to see her teach.” 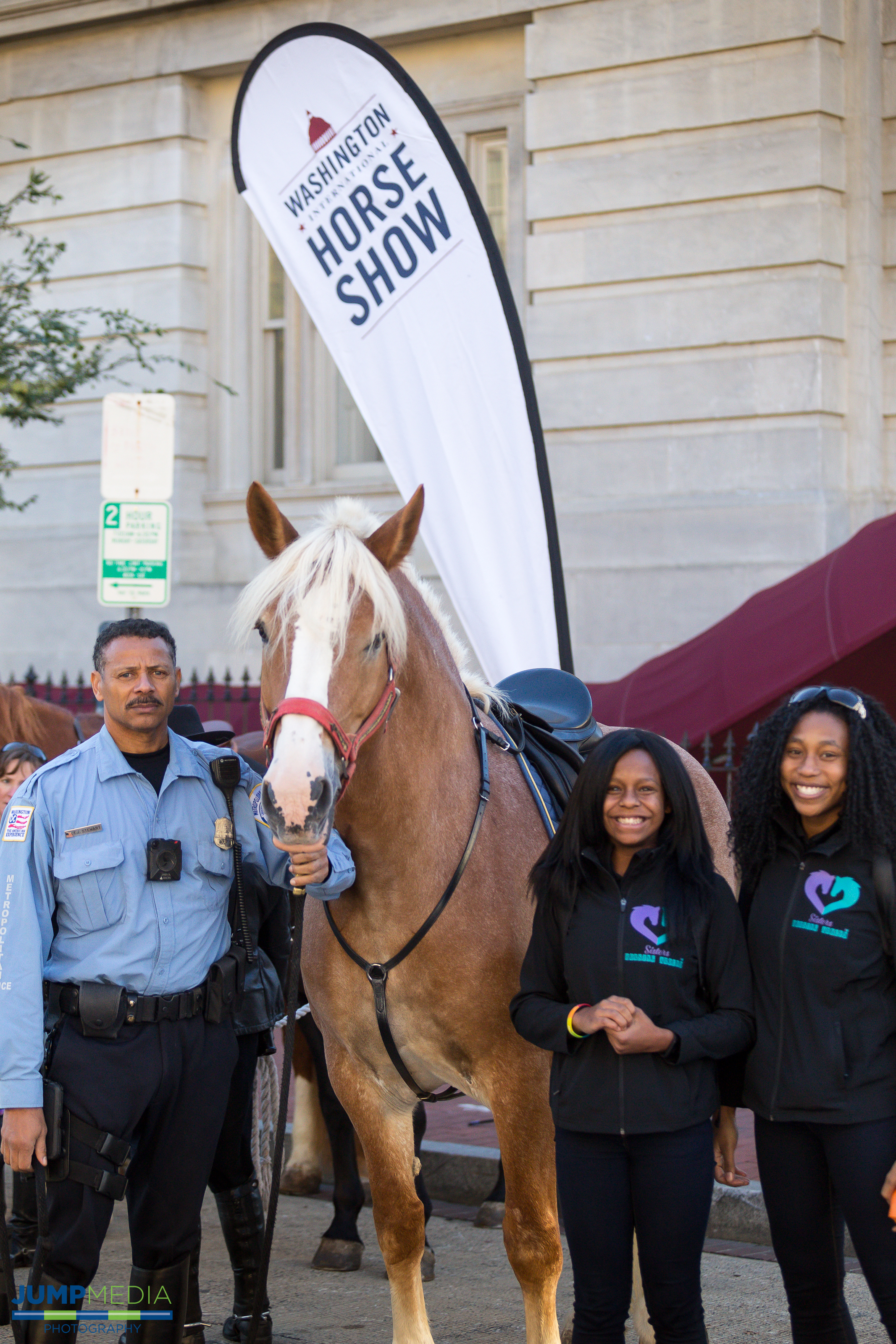 The Harris Sisters attended Breakfast with the Mounted Police on Wednesday
morning at WIHS.  Photo by Jump Media

At the clinic, they met WIHS President Vicki Lowell, who was so inspired by the girls’ story and their YouTube channel that she invited them to attend the show. The girls and Julie are in D.C. for four days to attend WIHS. “This is an amazing opportunity for them and I’m very grateful that they get to do this, and that I get to spend this time with them,” Julie said. “Seeing them get to experience this show that they’ve only watched on videos online… I can’t even explain. But I’m so grateful for this opportunity for them.”

Asked what rider they were most excited to see, the girls immediately replied in concert, “All of them!” They’re particularly excited to experience Barn Night, see the $25,000 Land Rover Puissance class, and finally get to view the WIHS Shetland Pony Championship Series, presented by Charles Owen, in person. “We've seen videos of that and we always love it,” Sarah said. “We even got our dad to watch it, and he loved it!”

It’s safe to say that Emily and Sarah’s parents were surprised by the girls’ interest in horses. Emily loved horses from a very early age and infected Sarah, who is six years younger, when she was little, too. Sarah’s first word was “hoy-hoy” for horse. “When Emily was a little girl, she asked for a horse, and we were like, ‘We don’t know anything about horses!’ We didn’t even know anyone who had horses,” Julie said. “We tried to discourage it because we just didn’t know anything about it.”

“I liked horses, but my dad said no!” Emily said. “Before Sarah came along, I would ask for a horse and my dad would say that we wouldn't ever get one. So I figured I'd get a horse when I grew up. But then I ended up getting one, so that dream came true.”

“I’ll be honest, it’s something our community, the African-American community, really isn’t into, especially in our area,” Julie said. “Horses weren’t something we were ever exposed to. So it was like we were getting into uncharted territory. But it’s what our girls were interested in, and we wanted to support and encourage them and this passion they have.”

Emily and Sarah got a basic education from a local trainer and from participating in a local 4-H club. They finally got a horse in the family when Sarah was 8 and Emily was 14; their herd is now up to six equines in their back yard. Sarah and Emily do all the horse care themselves. “Our place has evolved over time. Now we have an arena that's big enough to ride in, because originally our arena was really small, and only one person could ride at a time. But now it's bigger, and we can ride together,” Emily said.

“We are mostly self-trained,” Emily continued. “A lot of where we've gone to take lessons, has been a distance from us. It's such a drive to go somewhere. But we're part of Pony Club, and our mom has supplied us with a lot of books. We do a lot of western, and we do dressage and hunt seat. We'll be looking to get into some eventing later on.”

Earlier this year, the girls started posting their Sisters Horsing Around YouTube videos with their mother’s encouragement. “Our goal is to inspire other horse sisters so they can work together with their horses,” Sarah said. They document their lessons, do product reviews, and talk about their life with horses.

“This is something we do together,” Emily said. “We want everyone to have fun with their horses and be able to achieve the levels that they hope to. We have great aspirations to move up the levels and we're trying to document our journey.”

While the girls’ love for horses was a surprise for their parents, the family has embraced it. “It’s given them such a purpose in life,” Julie said. “They both want to have careers in horses. They’ve learned a work ethic. It teaches them to care for animals and care for something other than themselves. I’m glad that they have each other and that they have the horses.”